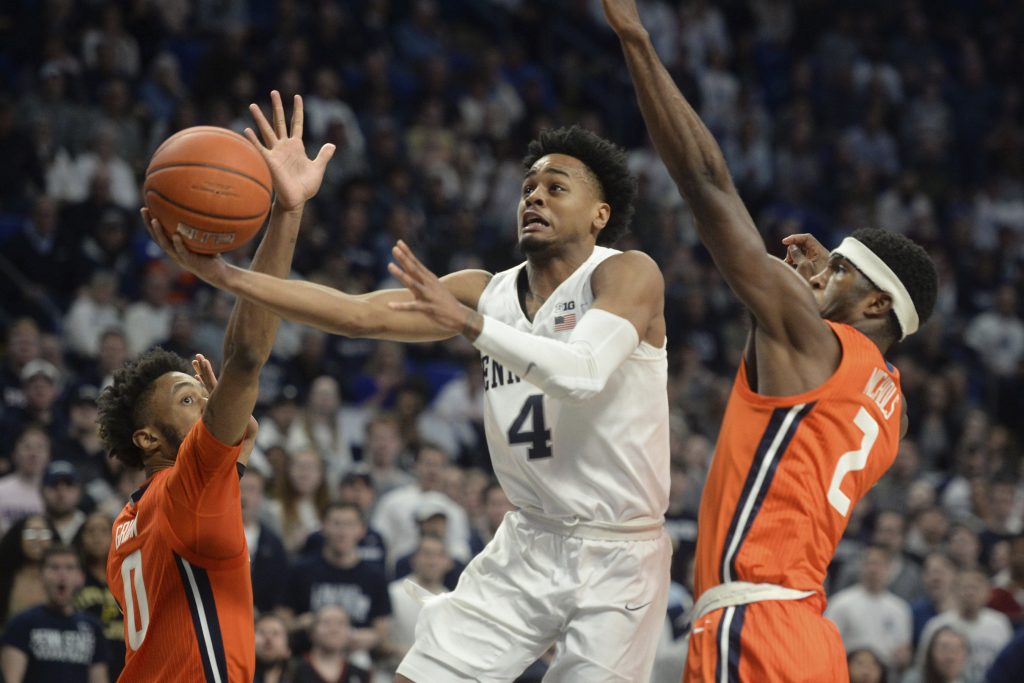 This is still a big story in college basketball, though maybe not the story it once was.

This is still a historic season for a program, even if the end is looking all too much like the decades that preceded it.

This, perhaps, still will be a very dangerous team once the NCAA men’s basketball tournament starts March 17. Even if it looks tired and worn down and, all too often, overwhelmed as the attention intensified.

Penn State’s men’s basketball team has 20 wins, a feat it accomplished just once in the previous 24 seasons. A little more than two weeks ago, it stood at No. 9 in the Associated Press Top 25, its best ranking ever.

It has also lost four of its last five games since. Its best player, senior Lamar Stevens, is shooting just 33 percent from the floor in those contests; outside of his 11-for-27 performance at Indiana on Feb. 23, he’s at 29.5 percent. The Nittany Lions had second-half leads against Illinois and Indiana, and lost both. It blew an 18-point halftime lead against Rutgers on Feb. 26 and needed a deep 3-pointer by sophomore Myles Dread in the closing seconds to avoid defeat. It trailed by 1 at halftime at Iowa on Saturday and was down 13 by the 10-minute mark on the way to a 77-68 loss.

Then Tuesday, in one of the most-anticipated games ever at the Bryce Jordan Center, the No. 20 Lions steamrolled No. 16 Michigan State in the first half, draining 10 3-pointers, handcuffing Spartans star point guard Cassius Winston, and building a 15-point halftime lead.

Then, a legendary coach with the composed team completely flipped the script. Michigan State’s defense tightened, while Penn

State’s loosened. The Spartans attacked the basket offensively, and Penn State had far too many empty possessions. The Nittany Lions who hit those 10 3s in the first half hit zero in the second. The Spartans connected on 19 of their 28 second-half shots. And Penn State went from up 19 to down 10 in less than 15 minutes of game action. 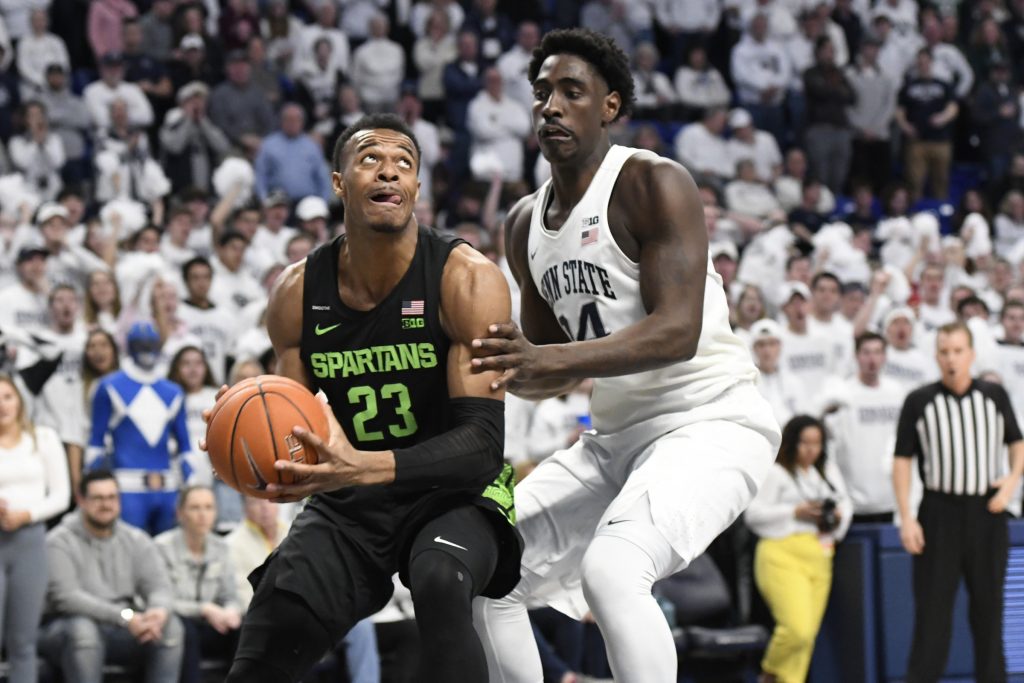 On both counts, Chambers is correct. Penn State is really, really good. You don’t put yourself in position to win the Big Ten, in a year when the Big Ten is inarguably the most competitive conference in the sport, if you’re not. Before this late-season swoon, they ripped off eight consecutive wins. They’ve beaten all these teams that have beaten them down the stretch, too: Iowa and Michigan State and Indiana. They’ve beaten Maryland and Ohio State and Purdue and Minnesota, too. And Wake Forest and Syracuse and Georgetown, as long as we’re counting.

If the Nittany Lions win the Big Ten Tournament in Indianapolis next week, it wouldn’t exactly be seen as a major upset. Nor would it be seen as a major surprise nationally if they took the court and got upended by a much lower-seeded team. They’re wildly inconsistent, sometimes from half to half, just as they’re dangerous every time they step on the court.

Before the loss to Michigan State, ESPN Bracketology expert Joe Lunardi projected the Nittany Lions as a No. 4 seed in the Big Dance. CBS’s Jerry Palm dropped them from a 4 to a 5 after the loss. That’s not exactly a poor position in one of the rare seasons where no team will enter the field a prohibitive favorite to celebrate a title in Atlanta.

Let’s say the committee completely undervalues Penn State in relation to the opinions of Lunardi and Palm, and gives it a 6-seed. That would still be Penn State’s best tournament seeding in 24 years.

Assuming it beats one of the conference’s lone pushovers, Northwestern, in the regular-season finale Saturday, Penn State will own 12 conference wins, a number it hasn’t reached in 25 years. And, it can set the program record for Big Ten wins if it manages to avoid an upset in the Big Ten tourney.

A trip to the NCAAs? A competitive seed? A record-setting season? Sell-out crowds in an arena where upper-deck seats were tarped off most of the past few seasons? That’s not nothing.

Penn State played exactly one NCAA tournament game in the last 19 years (a 66-64 loss to Temple in 2011), and it hasn’t won a game since upsetting North Carolina to get to the Sweet 16 in 2001. How long ago was that? The Heels’ leading scorer that afternoon was Julius Peppers.

The question Chambers has had to face these last few games is not whether his team is tournament-bound, but whether the Big Ten has prepared it for competitive success or worn it down to the point it can’t possibly give any more. Has this team played its best basketball, or is there something left in the tank?

“We’re getting close,” a defiant Chambers said. “We have a lot of basketball to be played, a lot of time for us to right the ship, and we will. Because, I know we have a lot of commitment and a lot of love in that locker room.”

Commitment and love can get you somewhere. But for Penn State, a rejuvenated Stevens, the return of a healthy Myreon Jones — who missed a few weeks with an illness just as the swoon started — and one of the deepest rosters in the Big Ten are going to be needed if they can look more like the team that got to No. 9 in the nation and less like the one that has struggled since.

This should go down as a memorable season for Penn State, no matter how the next two weeks go. But in a season where anything has happened, don’t count the Nittany Lions out yet.