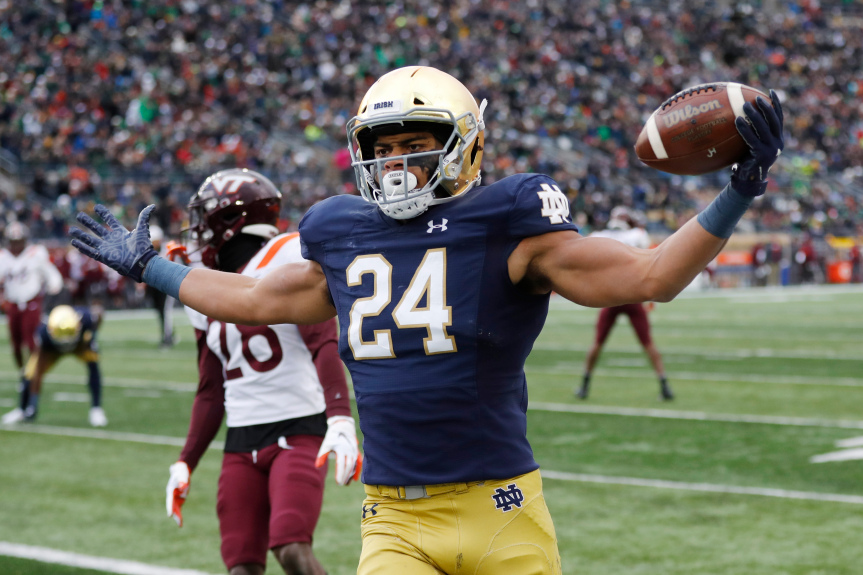 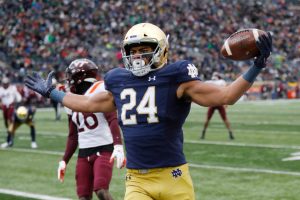 Notre Dame tight end Tommy Tremble (24) runs into the end zone for a after a 4-yard pass reception during the first half of an NCAA college football game against Virginia Tech, Saturday, Nov. 2, 2019. (AP Photo/Carlos Osorio)

During a recent conversation with The Times-Tribune, McNulty provided a brief scouting report of the position and some of the players who will be competing for playing time there this fall:

“When coach (Brian Kelly) interviewed me for this position, he said, ‘Look, I think we can do better with this position,'” McNulty said. “I was like, ‘OK.’ Decades worth of guys have been drafted. Every starter since 2005 has been drafted.”

There isn’t much statistical experience returning this fall. especially after Cole Kmet went as the No. 11 pick in the second round of the 2020 NFL Draft by the Chicago Bears in April.

But that doesn’t mean there isn’t plenty of talent to build on that tradition.

“Brock Wright kind of leads the whole group,” McNulty said. “He has been here. He was the number one tight end coming out of high school back in Houston, Tex., and he sets the standard for the kind of work ethic and behavior and how you play here.

“This is his time to kind of take off and run with it.”

“Tommy Tremble is the next guy. He had a number of touchdowns last year. Great work ethic. Plays tremendously hard. Intelligent. He’s got a chance to really take off, particularly in the pass game. But he’s a tremendous blocker, as well.”

“George Takacs is another guy who has been here a couple years, has had limited opportunities, then goes in the game and scores a touchdown and you don’t see him again. But he has had probably the best offseason that he has had, as odd as this is to say because he hasn’t been here for a lot of it. But, his body has changed. He has put in a tremendous amount of work. He has gotten great reviews from everybody since he got back from everybody in the weight room.”

“We have two freshmen that came in highly, highly recruited, one from New Jersey (four-star prospect Kevin Bauman) and one from Kentucky (four-star Michael Mayer, the No. 3-ranked TE in the nation, according to Rivals.com). High expectations on them, as well. I always just coach them all like they’re playing. I think freshmen come in, and they want to play. So, you get them all ready to play and you get to the game week and you figure, ‘How is this whole rotation going to go?’

“I have expectations for all five of them getting to a level where we trust them to start. If they don’t all get there in time, we’ll sort it out from there. But I think there’s going to be some names of guys people may not have heard of…that are going to surprise a lot of people this year.”