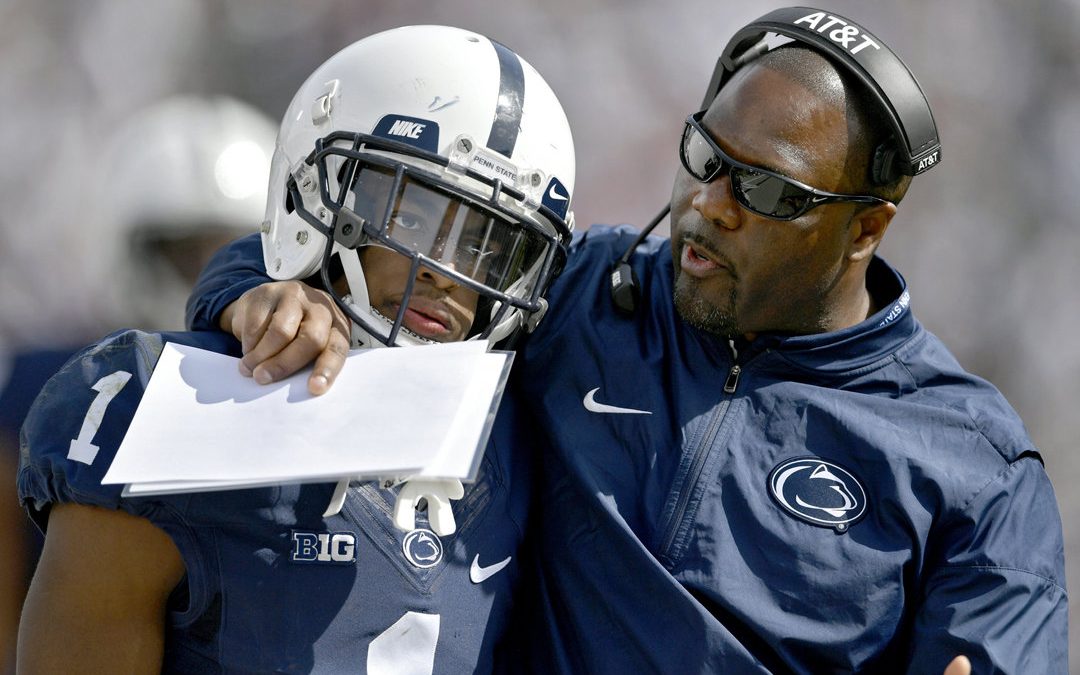 Former Penn State receivers coach David Corley (seen here chatting with receiver KJ Hamler in 2018) would have been a rarity years ago, after lasting just one season as a Nittany Lions assistant. Change on the coaching staff has become much more prevalent in the last few years, though. (Abby Drey/Centre Daily Times via AP)

Needs to be a homerun hire to stop the WR coaching carousel.

I’m one of the few sports writers who happily will admit I enjoy conversing with some fans on Twitter, and @PGQue is one who gives me some interesting things to think about consistently. If this person thinks it’s important to stop the “WR coaching carousel,” I’m confident most fans feel the same way.

My response to that tweet and the nervousness in general over how many assistants have come and gone from Happy Valley over a pretty good stretch of seasons now: I don’t think it’s a big deal to have some change on a staff year-to-year; in fact, I think it might actually be beneficial in many cases. Certainly, that’s debatable. But generally speaking, successful programs can weather consistent turnover among their position coaches. After all, Alabama has had four different receivers coaches in the last four seasons — Holmon Wiggins last season, our old buddy Josh Gattis the season before, Mike Locksley in 2017 and Billy Napier in 2016 — and they’re doing just fine in Tuscaloosa.

It’s far less about the coaches and far more about the players, in that regard.

Yet, you hear often among Penn State fans and some in the press about the need to find staff stability in Happy Valley, and that’s simply something fans of other successful programs don’t seem to get too worried about.

The source of the consternation here is pretty obvious. But is the reason for it necessary?

There’s a great line in one of my favorite movies, The Big Lebowski, where John Goodman’s character — the indomitable Walter Sobchak — defends his continued dedication to his Jewish faith, even though he only converted to Judaism to please his ex-wife. I won’t quote it directly for obvious reasons, but when told he’s living in the past, Walter responds, “Three thousand years of beautiful tradition from Moses to Sandy Koufax, you’re right I’m living in the past.”

There are plenty of Penn State fans living in the past, and I get that; 130-some years of beautiful tradition from Mother Dunn to Joe Paterno to Micah Parsons, and all that. But my guess is there are a higher number of Nittany Lions fans clutching frantically at the old way things were done than there are Alabama fans or Ohio State fans or even, say, Notre Dame fans.

The queasy feeling about the coaching carousel is a good example why. 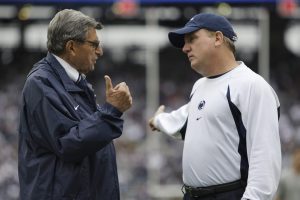 Look, most Penn State fans today either grew up during Paterno’s heyday or during his later years. Hard to believe, but unless you’re younger than 15, the longest-tenured coach of your lifetime to date has been JoePa. He coached in a different era and had different philosophies, because he could have them back then. One of those philosophies was the importance of keeping your staff together.

Nobody did that better, even back then. I went back 20 years, to the 2000 season, the first of what one might call the final era of his tenure. After the 1999 season, Paterno had to make several changes on his coaching staff — in the wake of the great 1999 collapse and partly because since-disgraced defensive coordinator Jerry Sandusky retired — and wound up promoting two assistants (defensive coordinator Tom Bradley and defensive line coach Larry Johnson Sr.) who would be with him for his final dozen seasons and help shape the course of Penn State football.

Think about this, as we move along: How many coaches on James Franklin’s 2020 staff would you bet will still be on the Penn State sideline in 2031? Franklin, perhaps. But you’d likely bet against Sean Spencer or Brent Pry or Phil Trautwein or Kirk Ciarrocca. That’s the nature of the game today.

Three more members of that 2011 staff — linebackers coach Ron Vanderlinden, who was hired before the 2001 season, and offensive coordinator Galen Hall and receivers coach Mike McQueary — had all been on the staff since the 2004 season. In other words, 80 percent of your 2011 coaching staff had been in place since Vanderlinden was hired heading into 2001, and 90 percent of it remained unchanged over the last eight years of Paterno’s tenure.

Factor in that Bill O’Brien’s staff didn’t see much turnover from the 2012 season through the end of 2013 — defensive coordinator Ted Roof left to become Georgia Tech’s defensive coordinator after 2012 (John Butler replaced him), and Anthony Midget joined the staff as Butler’s replacement at defensive backs coach for 2013, and that was the extent of it — and you have a rather unreal run of stability on the coaching staff over a 14-season period.

From 2000 through the 2015 season, the only Penn State assistants who coached just one season were Roof, Al Golden (the linebackers coach in 2000 who was hired as Virginia’s defensive coordinator for the 2001 season) and Bob White (who coached the defensive line and special teams in 2000 before heading back to a leadership role in the athletic department, where he has been since). The next least-tenured Paterno assistant: Receivers coach Kenny Carter, who worked for three seasons from 2001 through 2003. Everyone else on those staffs were coaching at least four seasons, and in their original role. 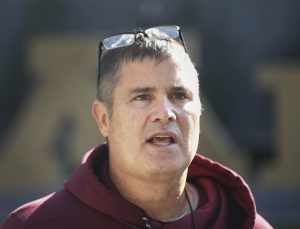 O’Brien said it best throughout his tenure with the Nittany Lions. He wanted to reach the pinnacle of his profession, and he didn’t consider living in Toftrees, whirlwind recruiting junkets and striving for national championships in a game where championship participants are still selected rather subjectively to quite be the peak of all things football. Some would, obviously.

In the 12 seasons (2001-11 and 2013) post-2000 where an existing staff could have made changes or coaches on those staffs could have left for other work, Penn State made just seven coaching moves.

Franklin has made/had to make 12 just since the 2015 season ended:

***I always thought Gattis got a bit of a raw deal for leaving for Alabama. Franklin’s comments after that (and before it, in fairness) that he preferred assistants didn’t feel compelled to leave Penn State to take the same job at another program kind of put Gattis in a bit of a lesser light with some fans, perhaps unintentionally on Franklin’s part. But the fact of the matter is, it’s not a lateral move to take the same job at Alabama. Nick Saban assistants seem to get the first look when other programs are searching for coordinators. Leaving was probably a good move for Gattis, who spent one season with the Tide, then got the offensive coordinator’s post at Michigan — a job he clearly wanted at Penn State before Franklin opted to go with Ricky Rahne. I’m not sure Gattis is the OC at Michigan right now if he stayed at Penn State in 2018.

I get it: As a Penn State fan, you went from seeing a program that hardly ever made changes within the staff to one that has averaged nearly three per year since the 2015 postseason, and you’ve seen the same staff return intact the next season just once (in 2017). That’s a lot of change, and it naturally makes you wonder whether this is normal, or whether it’s a sign your program is now a “steppingstone job” or just not quite on the level the better assistants want to be.

Fact of the matter is that it’s probably none of that.

And another fact that can’t be disputed: Penn State’s unquestioned best run of on-field success over the period we’re talking about has come from 2016 through 2019, when it went to three major bowls, won 10 games three times, won a Big Ten title and has finished in the Top 10 in the rankings three times. All in the midst of the coaching staff flux.

Tom Bradley used to say it all the time, but I think it was the old Texas coach Darrell Royal who coined the phrase: “It’s not the X’s and the O’s; it’s the Jimmys and the Joes.” 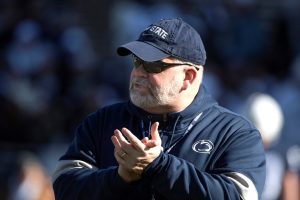 Matt Limegrover’s offensive lines performed well in the run game but struggled to protect its quarterbacks the last few seasons. Will a change at the position help the Nittany Lions get to the next level up front? (Associated Press File Photo)

In other words, you can argue that the best receivers coach Penn State has had in the last few seasons has been Gattis, because Gattis’ receivers — Chris Godwin, DaeSean Hamilton, Saeed Blacknall, etc. — performed better. You can also argue that Gattis’ receivers were just better than David Corley’s group in 2018, or Parker’s in 2019. Fans talk about developing receivers like there’s an exact science to it, but the reality is, it’s easier to develop Godwin into Godwin than it is to develop Juwan Johnson into Godwin, or Dan Chisena into Blacknall. Did Gattis develop good players into great ones? Or did he just have better raw material to work with than Corley and Parker had?

I think you can argue that both ways.

What you can’t argue is that talent makes coaching look really good. Take Alabama, for instance: As we mentioned earlier, it has had four different receivers coaches in the past four seasons. After 2016, 2017 and 2018, the Tide sent four receivers to the NFL, and it certainly is going to send at least two more to the league very high in this year’s selection meeting. Is that because of Wiggins or Gattis or Locksley or Napier? Or is it because of Calvin Ridley and Jerry Jeudy and Robert Foster and Henry Ruggs?

Point is, Penn State will find a receivers coach, and he’ll either oversee some improvement in a young group next season (in which case fans will want to keep him) or he won’t (in which case they’ll want him gone), and if it’s the former, some other program might want to give him a promotion (in which case, he might want to move on with his career). It’s the cycle now. Maybe you can describe that as vicious. It’s not, though. It’s just…different.

Continuity is great if you can find it, but it no longer rules the day.

If you’re staying the same, another old saying insists, you’re not getting better. Not sure opting for continuity over finding the right coach when you need to find one makes a program better over the long haul now.