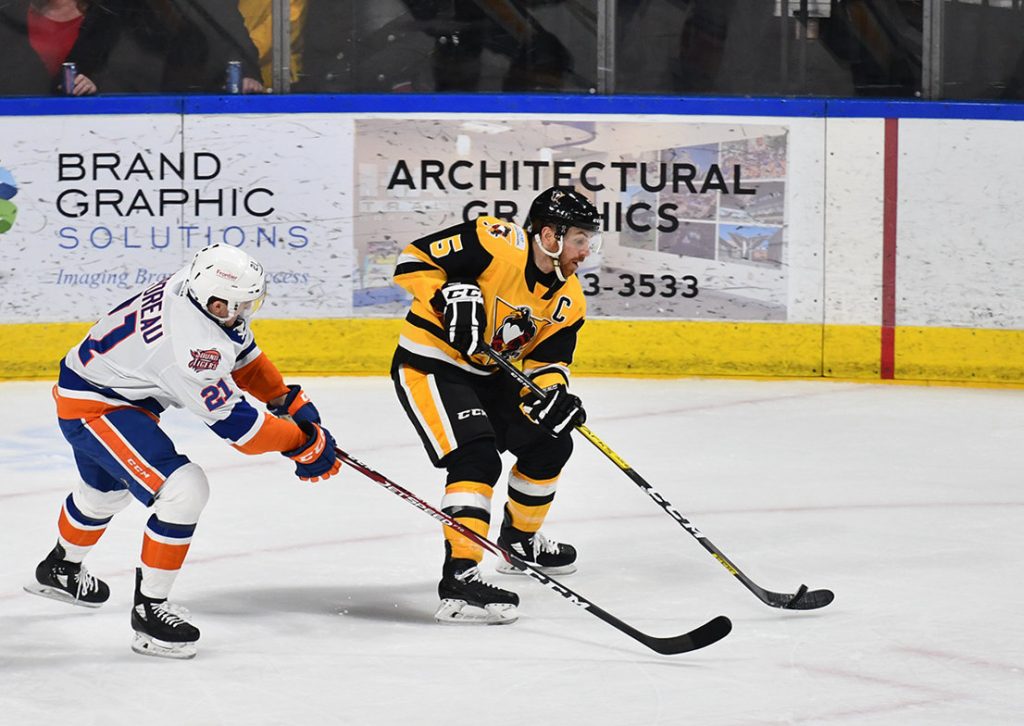 They had to look each other in the eyes and, as defenseman Jon Lizotte put it, man up.

Earlier this season, the Wilkes-Barre/Scranton Penguins were among the AHL’s worst teams at killing penalties — 30th overall and well under 80%. While stats don’t always tell the whole story, sitting at that extreme meant enough was enough.

“You’ve got to look into it,” Lizotte said Thursday at the Toyota SportsPlex. “Those goals, giving up one or two PK goals a game, can cost you games. We kind of have had to take charge and really lock it down and be a productive part of the team.”

Now, they’re an integral part of the group’s playoff push.

Through Friday’s game in Syracuse, the Penguins’ PK units had risen all the way to 13th overall at 82.8% — still behind teams they’re chasing in the Atlantic Division like Charlotte and Providence, but high enough that they clearly aren’t as severely disadvantaged while shorthanded. It’s been especially important in recent weeks, when Wilkes-Barre/Scranton has sputtered offensively and had little room for error in games crucial to its postseason positioning.

“I think we’re dialed into how we want to do it,” Penguins assistant coach J.D. Forrest said. “We have kind of a core group of killers that have taken ownership, and they’ve been blocking shots, getting their clears, working together. And then our goaltending’s been good when it needs to be: Casey (DeSmith), Ticker (Dustin Tokarski) and Larms (Emil Larmi), whoever it’s been, they’ve made big saves for us. And then we’ve been able to minimize high-risk chances.”

With new additions Phil Varone and Riley Barber clearly adding an element of explosiveness to the Penguins’ power play on Friday, the penalty kill’s resurgence gives the team its best one-two punch on special teams over the last three seasons. Last year, Wilkes-Barre/Scranton bottomed out by ranking 28th on the power play and 26th shorthanded.

Midseason adjustments and a change in mindset have, no doubt, played a role in the turnaround. However, another has been the leadership shown by players like rookies Lizotte and Pierre-Olivier Joseph, who have been two of the team’s most consistent killers all season by default. With injuries and transactions taking Zach Trotman, Kevin Czuczman, Joseph Blandisi, Thomas Di Pauli and others out of the fold at different points, they’ve already had to step up in plenty of critical moments.

Lizotte, for example, is frequently on the ice when the Penguins are down two men or on a kill with open space readily available in overtime.

“It’s changed up front a lot, but those two have been a constant in the back end,” Forrest said. “Now, they’re confident out there. They know what they’re doing and have really learned on the fly — not just on the kill, but in general.”

While he didn’t necessarily do so verbally, Lizotte said he has always played with the approach that he can lead by example and doing the right thing. He has tried to lean on that all season, whether it’s now or when the group was struggling back in the fall and early winter.

New arrivals like John Nyberg, who joined the Penguins in a trade back in January, have also embraced the fact that being a good penalty killer can help them cement their role on the team.

The result is a group that’s helped keep the Penguins in the playoff hunt. They went a combined 13 for 13 on kills in their previous three victories.

“It’s a total buy-in,” Penguins head coach Mike Vellucci said. “JD’s done a good job of getting them all to buy in, and I just think from that standpoint of it, now it’s not thinking. They knew exactly where to be.”