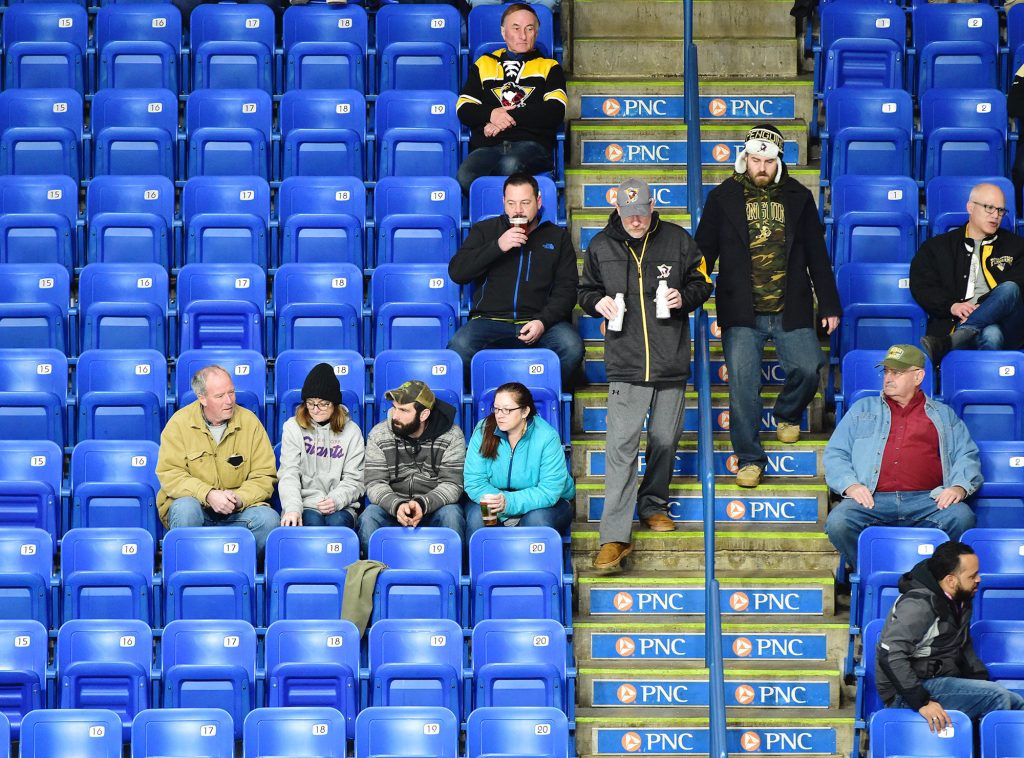 Penguins plan to remove 3 sections of seats at arena

Mohegan Sun Arena will have a new look for Wilkes-Barre/Scranton Penguins games next season.

The Penguins are eliminating three sections — 122, 124 and 126 — in the lower bowl, to make room for standing room only group hospitality areas for postgame concerts and other promotions. Team representatives contacted season-ticket holders in those sections by phone Wednesday and also sent letters to alert them of the change, Penguins Vice President of Business Development Jon Stephenson said.

Stephenson estimated that around 150 accounts are affected by the new layout.

The change is only for Penguins games. The seating sections are retractable and can be reassembled as needed for other events at the arena.

“We’ve had a growing demand for group hospitality areas, and it’s a trend across the sport” Stephenson said. “By removing these seats, it would allow us to meet that demand for groups and businesses.”

Stephenson added that the team consulted a fan advisory board regarding the proposed change, and reception to the idea was generally positive.

The team offered ticket holders with two options for their seats next season. They may relocate to the Club seating sections and lock in their current payment level for one season, or they may move to any other available location with an equal price point and lock in at their payment level for three seasons.

“We realize that you, along with many other longtime Season Ticket Members, have called these seats ‘home’ over the years,” the letter reads, “and that moving your seat location may cause some disarray.”

In addition to being able to better accommodate groups and businesses, one of the significant reasons for the change is the Penguins’ plan to feature an expanded concert series in correlation with games. Earlier this season, Dave Matthews Band and Led Zeppelin tribute groups played a postgame set on back-to-back nights. The Penguins removed seats in the same area to make room for the stage and accommodate fans that purchased VIP packages, which included food and drink and a special viewing space for the game.

Stephenson said the team is planning to host a well-known act for opening night in the fall, but no specific plans are in place yet.

“We’re working on it,” he said. “We want the hockey fan to enjoy the game, but also have people that aren’t necessarily hockey fans enjoy the experience.”

The plan marks the latest example in a series of changes at the Wilkes-Barre Twp. facility since a new lease agreement to keep the American Hockey League franchise in Northeast Pennsylvania was announced last summer.

For this season, a new lighting system and ribbon board were added to enhance the viewing experience for fans. Additionally, the team renovated its locker room area on the event level, adding a lounge area for players and coaches.