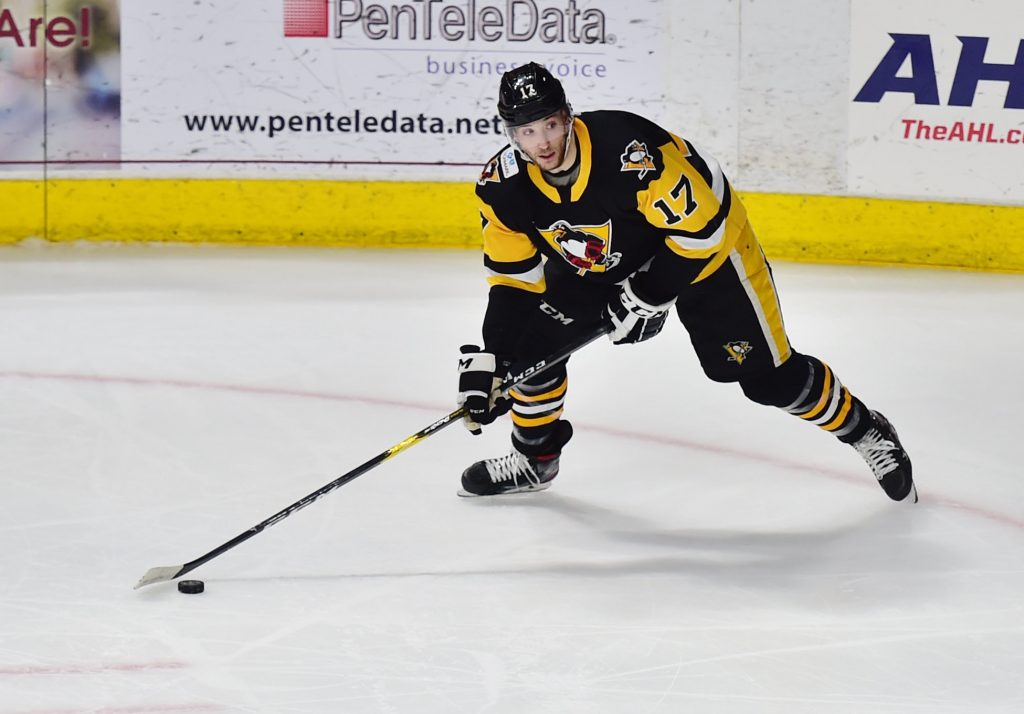 Community service has been important to Anthony Angello for as long as he can remember and something his mother always preached.

Whether it was volunteering at a nursing home, meeting with hospital patients or something as simple as reading a book to children, he’s cherished those experiences and is happy to use his presence in hockey for the greater good.

On Monday, the American Hockey League recognized the Penguins forward for his achievements. Angello was named Wilkes-Barre/Scranton’s winner of the IOA/American Specialty AHL Man of the Year award for his contributions to the Northeast Pennsylvania community. The annual honor is given to one member of each of the league’s 31 teams, and recipients become finalists for the Yanick Dupre Memorial Award — given annually to the league’s overall Man of the Year.

Angello, 24, teamed with Penguins Vice President of Operations Brian Coe to organize Anthony’s Book Club, a program to encourage reading for children and young adults. The New York native visited area libraries with teammates and mascot Tux to read to kids, work on arts and crafts and answer any of their questions about reading and hockey. The team was able to complete eight of nine in-person library visits before the league’s stoppage because of the coronavirus, and Angello has continued the program over the Internet. 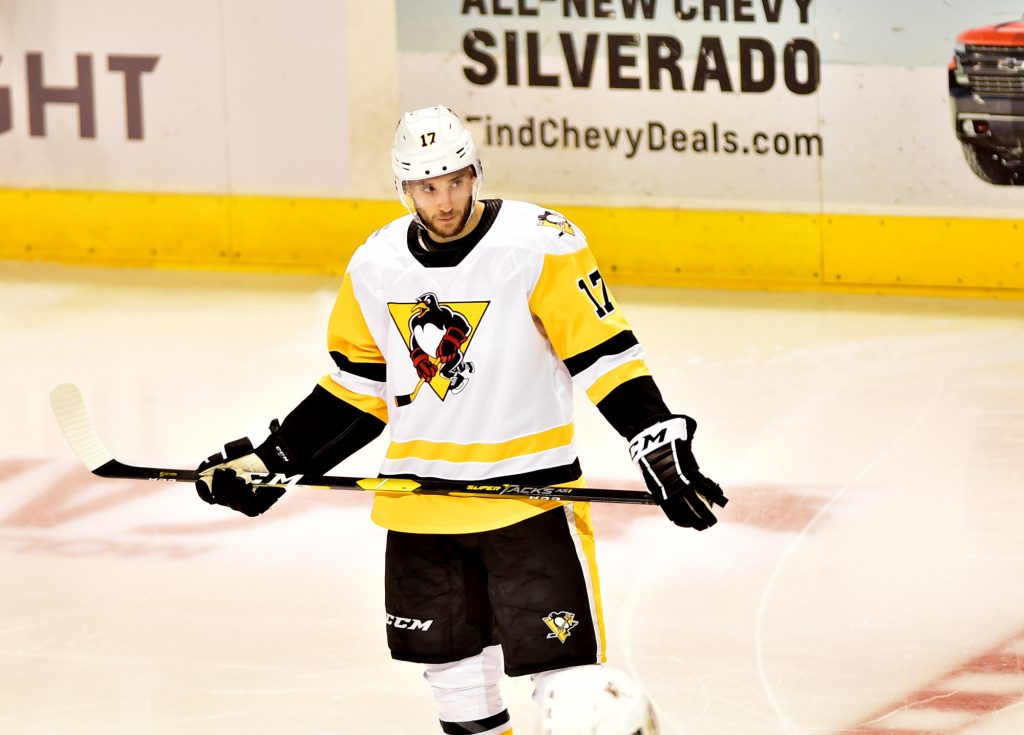 “Anthony’s the biggest part of this; this was his idea,” Coe said. “Keeping it going online right now is really important. Kids are home, they’re doing a lot of homeschooling. Parents are looking for help in any way possible to keep kids engaged and to keep them learning, and I think what Anthony is bringing to the table with these weekly stories and just sharing his thoughts and a positive attitude … it plays a big part in these kids’ lives virtually.”

Angello is happy to keep the book club going, especially now with hockey on the back burner for a lot of the Penguins during the pandemic. He’s continued to work out and keep up his cardio during the break, and he said he’s been on the “up and up” recovering from an injury suffered just before the shutdown in early March.

However, he said he’s looking at the bigger picture and appreciating the extra time he’s getting to spend with his family and talking to his grandparents.

“I actually got off the phone with Coach (Mike) Vellucci before this, and we were just talking,” he said. “Not even really that much about hockey. It was just about kind of everything on the outside that you don’t get to talk about at the rink because hockey’s just the focus.”

Angello echoed much of what Vellucci mentioned last week regarding the growth of the team’s younger players and how much it will benefit the Penguins when they do eventually start playing again. He also admitted he was disappointed the Penguins had a potential playoff push halted by the league shutdown. The Penguins were seven points out of fourth place with 13 games left when play was stopped. 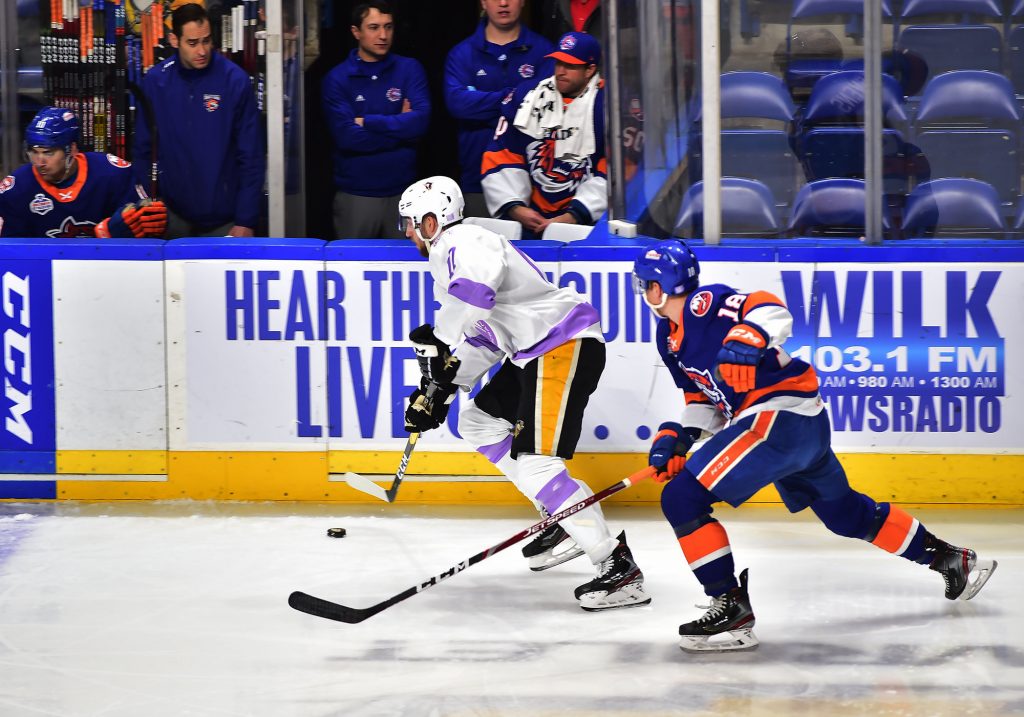 Individually, the second-year pro had a season to remember, as he emerged as one of the Penguins’ top forwards and became the team’s leading scorer. More importantly, though, he made his NHL debut and also scored his first NHL goal with Pittsburgh.

Angello was very candid about what it meant to fulfill his dream and play with his hockey hero, Sidney Crosby.

“I had a couple little (Crosby) pictures and inspirational things hanging in my room back in 2007 from the Winter Classic; I was 11 at that time,” he said. “It was just somebody I idolized, how hard he works, how skilled he was, how talented. To get called up and actually play with him and he came over and shook my hand and said, ‘Congratulations, congrats on your debut. You’ll remember this day your whole life.’ It was just so surreal. When I scored my first goal, he was super excited on the bench and he gave me a fist bump and smiled. Then, Patric Hornqvist was freaking out because nobody got the puck (from the first goal).

“It was really cool. Obviously, a lot of hard work, a lot of sacrifice and a lot of people I need to thank for where I got to and how I got there. Those were two of the best memories I had from this season and that I’ll have for the rest of my life.”