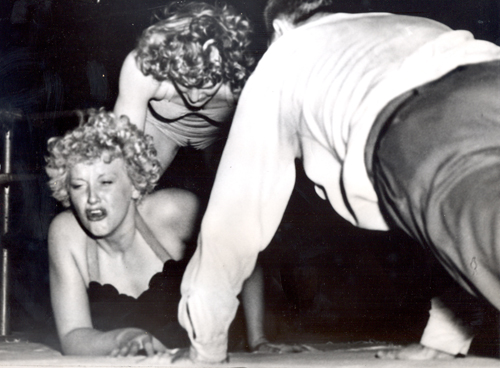 More than 2,500 people filled Town Hall on Adams Avenue for a first-of-its-kind show in Scranton — female wrestling.
Wrestling that Monday night were Ella Waldek and Beverly Lehner. After three rounds of elbows, kicks, slaps and hair-pulling in the ring, Waldek was declared the winner.
This wasn’t the first time the pair wrestled. A year and half earlier, Waldek, 21, of Custer, Washington, and Lehner, 18, of Council Bluffs, Iowa, wrestled in Tulsa. Waldek also won that match.
Scranton’s night of wrestling, promoted by Hank Stezar, also included male matches between Walter Derin and John Heidemann, Wally Dusek and Ed Fiaetta, and George Lenihan and Mike Kolonis. The night’s purse was $3,180.76. At the end, an announcer informed those gathered that this was the largest-ever attendance for a wrestling event at Town Hall.
Lehner continued wrestling for 20 years before retiring in 1968, according to her obituary in the Daily Nonpareil of Council Bluff. She died Aug. 30, 2010, in Estes Park, Colorado. She was 77.
Waldek, meanwhile, kept wrestling until the early 1970s, her obituary in the Tampa Bay Times noted. After her retirement, she started working as a security guard and private detective, and later was featured in the 2004 documentary “Lipstick and Dynamite: The First Ladies of Wrestling.” She was the great-aunt of singer-songwriter Neko Case, who provided music for the film, according to Now Toronto. Waldek died April 17, 2013, at 82.

Beverly Lehner grimaces in approved fasion as Ella Waldek applies a leg hold on the Town Hall mat on March 26, 1951 while Referee Johnny Kelly looks on. Ella won the match two falls out of three before a near-record crowd. Times-Tribune Archives

Here is a review of the match by Scranton Times’ Society editor, Jeannette Reese that appeared in the Scranton Times on March 27, 1951.

Editor’s Note – After a day of attending women’s meetings and luncheons and writing about weddings Jeannette Reese, Society Page Editor, went to the wrestling matches at Town Hall last night at the invitation of the Sports Department. This marked Ms. Reese’s first appearance at a wrestling match. After the match, Ms. Reese went to a ball at the Hotel Casey. She said that hereafter she would stick to something to her own line after, of course, she had thanked the sports department for its invitation.

There will always be a doubt in my mind as to the legitimacy of the lady wrestling match last might in Town Hall. My first experience at a prize ring and this reporter is disillusioned.

Town Hall was jammed when I arrived. I climbed 14 steps to the ladies’ dressing room to get a first-hand glimpse of the wrestlers. What I expected to see was far from actual. The ladies were “girls” and rather pretty one. Dressed for the ring, they most graciously received us and were most cooperative.

Both blondes, they were Ella Weldek, 21 of Custer, Washington, and Beverly Lehner, 18, of Council Bluffs, Iowa. They told me they had wrestled together a year and one-half ago in Tulsa, OK., when Ella was declared the winner and Beverly had come back for more!

Ella was wearing an aquamarine suit and black and silver high-laced wrestling shoes. Weighing 150 pounds, she is five feet, five inches tall and has a rather husky voice. She has been wrestling for two and half years, appearing in 42 of the United States. Her appearances in Pennsylvania have been in Reading, Philadelphia and New Castle. She is a former civil service employee.

Beverly, of identical height, weighing in at 152 pounds and fresh out of high school, a year and half ago has wrestled in 42 states, Canada and Mexico, appearing in Altoona, New Castle and Pittsburgh and on television. She was wearing a black suit with green and gold shoes.

The two of the 150 girl wrestlers in the country explained the rules for lady-wrestling. They stated those rules were identical to those made for the men – no illegal holds, break at the count of four and if either one is knocked to the floor, break at the count of 10. Laughingly they added that anything the referee doesn’t see is legal and that, although one of the musts is not to touch the referee, “there are many times you’d like to – and how!”

Fortified with all this information, I descended into my ringside seat and inhaled everything but fresh air – during the bouts preceding this one the “No Smoking” signs must have been removed or something. Now I was ready for the big event which had attracted approximately 2,507 fans.

Beverly, wearing her green and gold long robe, came down the left aisle amid wolf-whistles and yelling from the spectators. She ascended the steps to the ring, gracefully jumped over the ropes and stood in one corner. A few seconds later Ella arrived in her blue satin robe jumped the ropes and found her corner.

Now come a part which was familiar to me – we all stood and sang the National Anthem,then the announcer introduced the girls the bell rang and the show was on.

I had been told the idea if whole thing was for one of the girls to get the other down twice – or two falls, clinches or what have you – Beverly, the exhibitionist and Ella with her eye on the world’s championship title now held by Mildred Burke of Los Angeles, Cal.

Beverly, with the sort of “Judy Holiday’ expression was the aggressor. Her arm, knee, neck and ankle holds brought her victim to the canvas time and time again. Ella used her legs and knees in forcing Beverly on the ropes and each move brought a retaliation. They jumped on each other, slapped each other, pulled each other’s hair – Bevelry had the advantage in the hair pulling contest because she had a short haircut.

To a novice, the first act looked like a draw but when the bell rang at the finish of that one, the first fall went to Beverly.

The second spasm presented a new phase of action. The girls stood on the ropes, hung on them crawled through them. They made fists at each other, showed their teeth like cats and went into veritable tantrums, pouting and sulking in their respective corners.

They threw each over their heads, gave each other stomach kicks and “seat-of-the-pants kicks, slapped each other in the face, swung each other around the ring over their heads and when the bell sounded, Ella’s hand was raised in the air, signifying that she as the winner of the second act.

Show Must Go On

Now for the third! If the man sitting next to hadn’t informed me who was going to win O wouldn’t have been so alert. Now I looked for openings and saw loopholes on either side and no one can convince me to the contrary. The round was short and when Ella was declared the winner my only reaction as that there must be other ways of earning a living!

Haven’t any idea what the wrestler are paid but I do know they earn every cent. With all the slamming around they took, the pounding on their “fronts” and backs, it is no secret to me why they are so well proportioned.

Granted wrestling is skill in falling and skill in pretense, and granted there is a world’s championship to covet and obtain to me, if the show must go on, let it, just so long as they don’t infringe on my territory and I assure I will not on theirs.