Time Warp – Professional wrestling took over region in summer of 1983

It was embarrassment of riches for local professional wrestling fans in the summer of 1983. Over the course of three months, the World Wrestling Federation presented 10 evenings of dropkicks, pile drivers and clothesline throughout Northeast Pennsylvania.
The wrestlers stopped in Scranton, Hazleton, Tunkhannock, Carbondale, Hawley and Berwick. 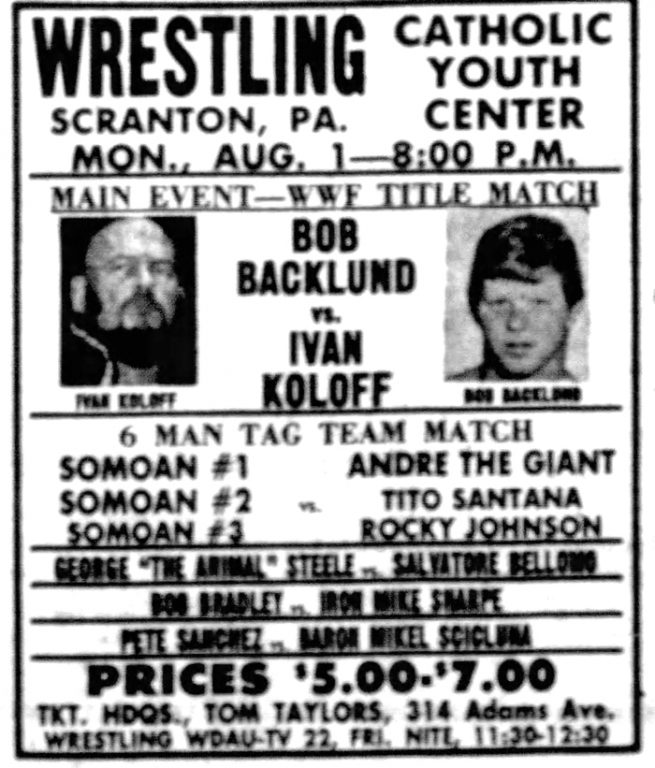 Advertisement for the professional wrestling matches at the Catholic Youth Center in Scranton on Aug. 1, 1983. The ad appeared in the Scranton Times on Aug. 1. TIMES-TRIBUNE ARCHIVES

Leading off NEPA’s version of SummerSlam was a show in Berwick High School on June 2. According to wrestlingdata.com, the big match of the night was between WWF World Champion Bob Backland and Intercontinental Champion Magnificent Muraco. Also wrestling that night were Sgt. Slaughter and Frank Williams. Backland and Slaughter both won their matches.
The next two shows took place in Scranton on June 20 and July 11 at the Catholic Youth Center. On June 20, some 1,800 fans witnessed George “The Animal” Steele pin Salvatore Bellomo and Muraco defeat Swede Hanson in a grudge match. The big fight of the night on July 11 at the CYC took place outside the ring between Jimmy “Superfly” Snuka and Muraco. The pair were both disqualified by referee Jack Carson for fighting outside the ring during their match. That evening, about 3,500 fans filled the CYC gym.
The next show was on July 26, and it was the first time that professional wrestling took place in Tunkhannock. At The Tunkhannock Area High School gym, the event was sponsored by the Tunkhannock Kiwanis Club.
Hitting the mats the night were Rocky Johnson – father of Dwayne “The Rock” Johnson – versus Mr. Fuji, and there was a title match between Intercontinental champ Muraco and Bellomo. Johnson took down Fuji, and Muraco retained his title against Bellomo. 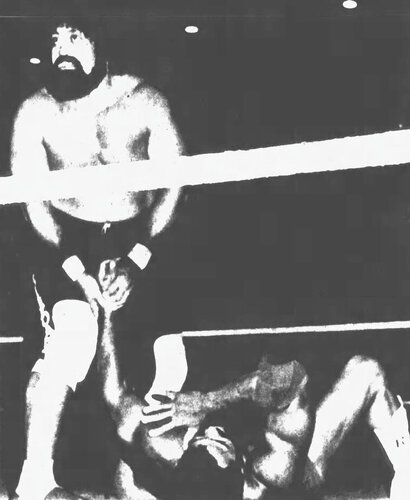 One of the Wild Samoans applies an armbar to Rocky Johson before being disqualified during the bout on Aug. 23, 1983 at St. Joseph’s Gym in Hazleton. TIMES-SHAMROCK ARCHIVES

On July 28, at a professional match in Hawley, Johnson defeated Muraco by disqualification, and both Slaughter and Ivan Putski were disqualified during their match, according to wrestlingdata.com.
The wrestlers headed back down to Luzerne County with a matches on July 31 at St. Joseph’s Gym in Hazleton. That evening 6-foot-10-inches tall Big John Studdtook down Pete Sanchez, Tito Santana pinned Iron Mike Sharpe, and Steele was defeated by Putski.
The following night, Aug. 1, over 2,000 wrestling fans were on hand at the CYC in Scranton to see a six-man tag-team match and title match. The tag team match pitted Johnson, Andre the Giant and Tito Santana against the Wild Samoans and Samula. Andre, Rocky and Tito won the match by taking two of the three falls.
The title fight was between heavyweight champ Backlund and former heavyweight title holder Ivan Koloff. Backlund defeated Koloff to retain his title.
Almost two weeks later, on Aug. 12, wrestling returned to Lackawanna County, this time in Carbondale.
Facing off in the ring that night at Carbondale Area High School to benefit Our Lady of Mount Carmel Church was Putski against Sharpe and a tag-team match between the Invaders and Hansen and Israel Matia.
Putski took down Iron Mike, and the Invaders defeated the Hansen/Matia team.

Advertisement for the Aug. 22, 1983 professional wrestling matches at the Catholic Youth Center in Scranton. The ad appeared in the Sunday Times on Aug. 21. TIMES-TRIBUNE ARCHIVES

As the summer started to wind down, wrestling fans saw the final two shows of the season.
The first was in Scranton at the CYC on Aug. 22. That night, Backlund defeated Sgt. Slaughter and Bellomo took down Sharpe.
The following night, Aug. 23, the wrestlers and 3,500 fans once again took over St. Joseph’s Gym in Hazleton.
Backlund defended his title from Studd by taking down the wrestler in 12 minutes. Johnson won his match against one of the Wild Samoans by disqualification, and the other Wild Samoan took down Bellomo.