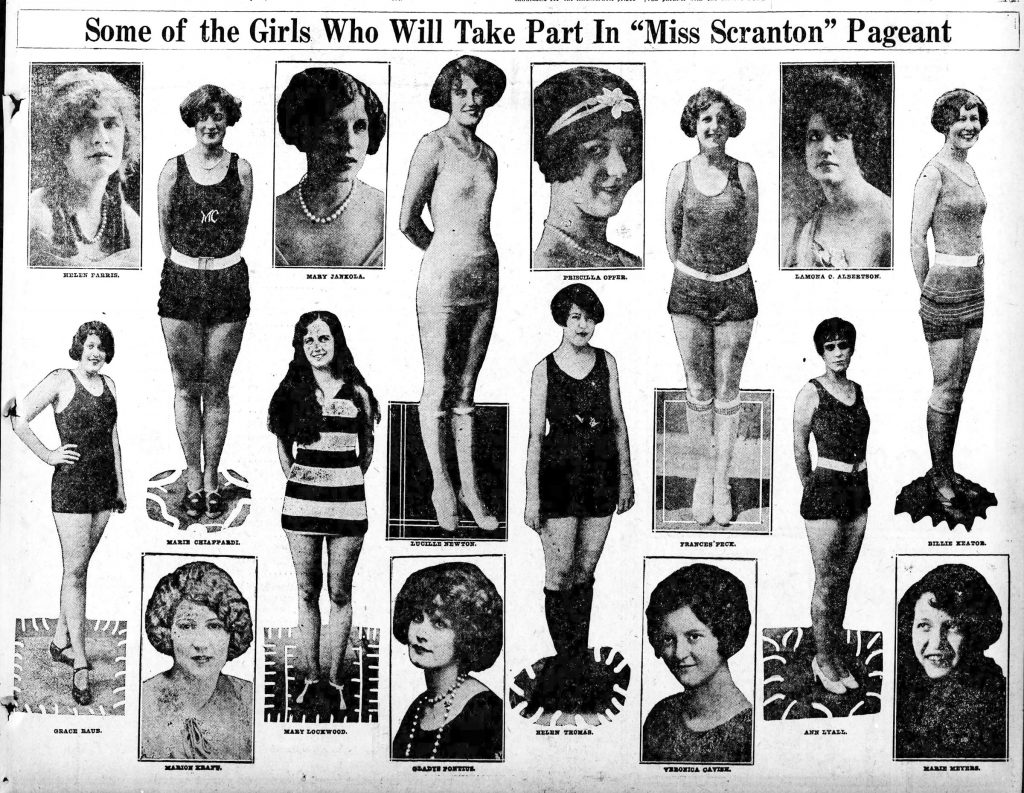 Lake Lincoln at Nay Aug Park was all set to host the first contest to crown a young woman as Miss Scranton.
At 3p.m., the contest got underway. The young women, 36 in all, paraded from the ladies’ bath house at the northeast end of the pool and made their way around until they reached the judging area. The area around the pool was filled with an estimated crowd of 35,000. There were so many spectators on the roof of the men’s bath house pool that officials worried that the roof was going to collapse.
The five judges, A.N. Russo, sculptor; James Hagaman, artist; F.W. Hornbaker, photographer; Albert Brust Jr., artist photographer; and Frank E. Sutch, Scranton’s superintendent of bureau of recreation, took notes about the young women as they passed by their stand. After the last young woman walked past, the judges went off to make their selection on who would reign as Miss Scranton and represent the city in the Miss America competition in Atlantic City. The judges also selected an alternate Miss Scranton and four additional women for honorable mentions. 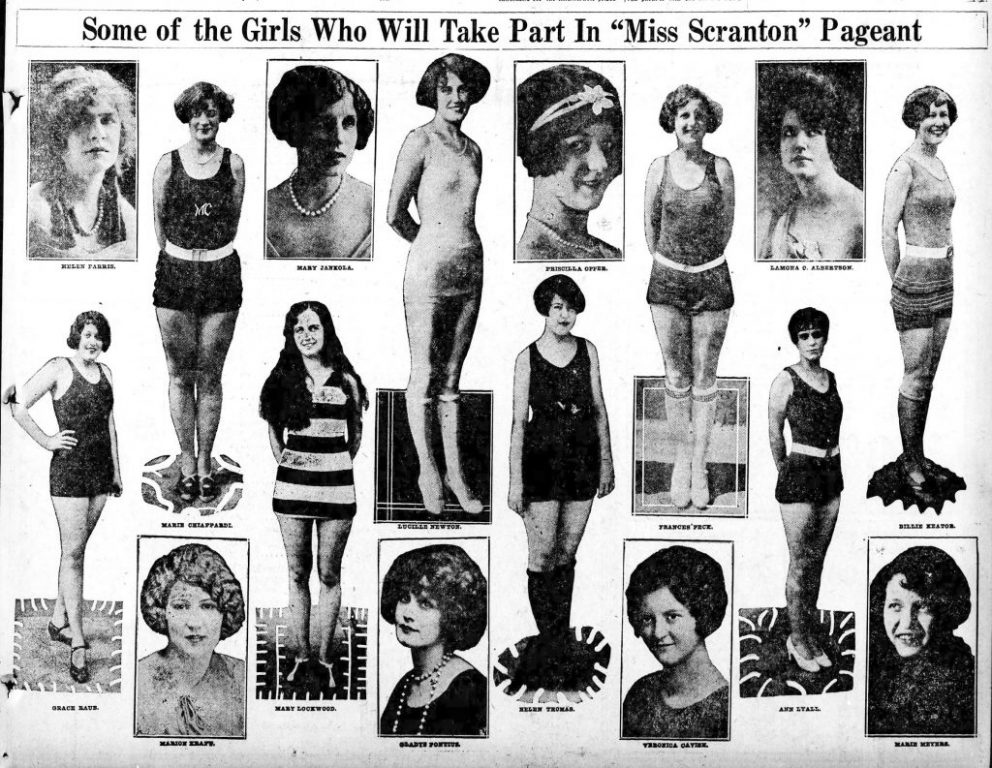 Photo collection of some of the participants in the first Miss Scranton beauty pageant held on July 29, 1925 at Lake Lincoln at Nay Aug Park. TIMES SHAMROCK ARCHIVES

After deliberation, the judges chose Beulah Keator, 209 Jefferson Ave., as Miss Scranton. The alternate was Matilda Fuller, 348 Maple St. The honorable mentions went to Mae Joyce, Gertrude Koch, Priscilla Opper and Lamona Albertson.
Keator won a pearl crown, string of pearls, numerous bouquets of flowers and a letter from a local dealership authorizing her use of a Willys-Knight sedan with a chauffeur for her trip to Atlantic City. Also, Scranton Dry Goods provided her with a complete wardrobe for her time in Atlantic City.
Fuller received $15 in gold, Joyce got $10 in gold, Koch got $5 and a bathing suit, and Opper and Albertson received $5 in gold.
Hundreds were on hand to wave goodbye and wish Keator good luck as she left the Hotel Jermyn for Atlantic City on Sept. 7. On her way out of town, her chauffeur drove to Scranton City Hall, where Mayor John Durkan addressed the newly crowned Miss Scranton.
Durkan said to Keator, “On behalf of the city of Scranton, I want you to know that as you go to Atlantic City, there to carry the colors of our community into the competition with the beauties of the foremost cities of the country, you will have the backing of all of our people. You were chosen as Miss Scranton against a field of beauties in a contest where competition was keen, and you rightfully earned the privilege of representing us at Atlantic City.”

Beulah Keator, the first Miss Scranton. Keator would go on to represent Scranton in the Miss America pageant in Atlantic City in September 1935. TIMES-SHAMROCK ARCHIVES

The Miss America festivities began on Sept. 9 with a baby parade and gala ball for the contestants. On Sept. 10, the beauty competition got underway. Keator was eliminated in one of the early rounds. However, she received top marks during the evening gown competition for her Alice blue fur-trimmed gown.
Fay Lanphier, representing the state of California, was crowned Miss America.
On Sept. 16, Keator returned to Scranton, where she was the guest of honor at a reception and fashion show at Scranton Dry Goods. The fashion show featured items she wore in Atlantic City for the Miss America pageant.
The following year, Keator crowned her successor, Ila Williams. In 1927, Keator served as a mentor for the young women who participated in that year’s Miss Scranton pageant.