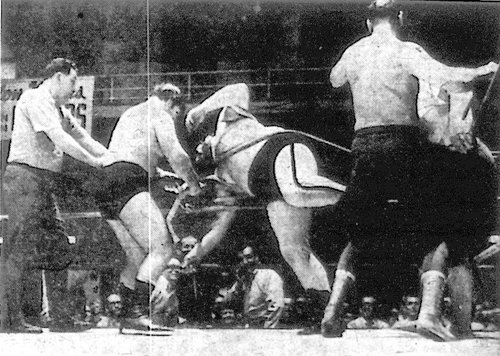 Professional Wrestling Cause A Stir In Scranton

Editor’s Note – These two article appeared in the Times-Tribune back in 2019.

Near riot at wrestling match 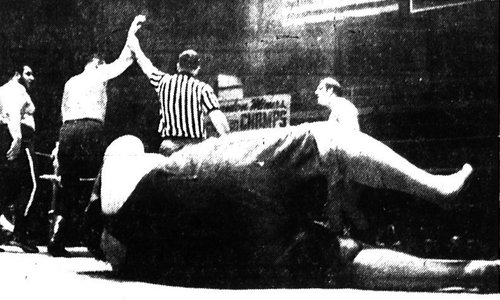 Referee Dick Woehrle declares Killer Kowalski the winner in a tag-team match Feb. 11, 1969, at the Catholic Youth Center. At front, Haystacks Calhoun is unconscious after being knocked out by Gorilla Monsoon using a horseshoe. Times-Tribune Archives

The World Wide Wrestling Federation presented a memorable evening of wrestling at the Catholic Youth Center in Scranton.
The headline was a tag-team match between heavyweight champ Bruno Sammartino and Haystacks Calhoun against Killer Kowalski and Gorilla Monsoon. This was a re-match of sorts from the last time they were in Scranton.
Sammartino was about to win his bout with Monsoon when Kowalski climbed into the ring and launched a surprise attack on Sammartino.
Toward the end of the evening match, chaos broke out in the gymnasium. It started when Kowalski kicked referee Dick Woehrle out of the ring and Sammartino went to the aid of Woehrle.
With Sammartino and the referee out of the way, Monsoon struck Calhoun in the head with a horseshoe, which rendered him unconscious. Then Kowalski jumped in and got on top of Calhoun. Woehrle re-entered the ring and declared Kowalski the victor.
The referee’s decision wasn’t taken lightly by Sammartino and the 2,000-plus crowd. The crowd booed and howled for 30 minutes and Sammartino staged a sit-in in the center of the ring. Those close to the ring reported they saw tears streaming down Sammartino’s face and heard him say, “it is terrible, just terrible.”
WWWF President Willie Gilzenberg, hearing the anger of the crowd, announced that the already scheduled fight between the four for March 15 was moved up to Feb. 28

Tag-team match at CYC brings the ring down

With a good portion of the rope from the collapsed section of the ring wrapped around their necks on Feb. 28, 1969 wrestling losers Gorilla Monsoon, Killer Kowalski. Enraged Bruno Sammartino, Haystacks Calhoun did the bad boys up, western style. Times-Tribune Archives

Over 2,800 wrestling fans filed the Catholic Youth Center in Scranton for an epic rematch between Bruno Sammartino, Haystacks Calhoun, Gorilla Monsoon and Killer Kowalski. The four men met just weeks before in a match that almost led to a riot by the fans in attendance over the underhanded actions of Monsoon and Kowalski to win the match.
The four, with a combined weight of 1,551 pounds, entered the ring to settle their differences in a Texas Death Match. In the first bout, Sammartino was pinned by Monsoon with an assist from Kowalski. In the next match, Sammartino-Calhoun, in quick action, scored a quick double pin of their opponents.
By the end of the third match, the ring was literally falling apart. Ropes were sheared and the turnbuckles broken on the side of the ring. Sammartino and Calhoun used the loosened ropes to tie up their opponents to win the match. 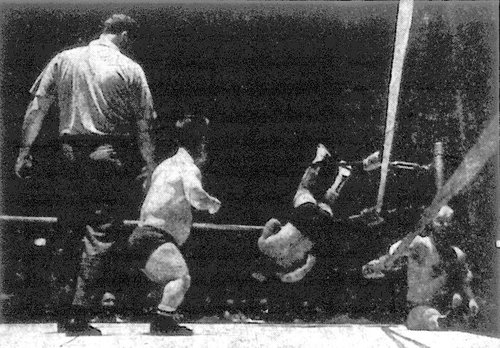 In addition to the headline tag-team match, there was a midget wrestling tag-team match between Irish Jackie, Little Beaver, Little Brutus and Sky Low Low. Irish Jackie and Little Beaver were the victors.
Their match was filled with laughs, thanks to the athletes’ use of tomfoolery and slapstick.
Also wrestling were Angelo Savold and Tom Brandon, John L. Sullivan and John Rods and Victor Rivera and Baron Scicluna. Savold defeated Brandon, Rivera Scicluna match ended in a draw and Sullivan defeated Rods.
Officials from the CYC said that this was the largest crowd for a pro wrestling event at the venue since pro-wrestling returned after a five-year hiatus.