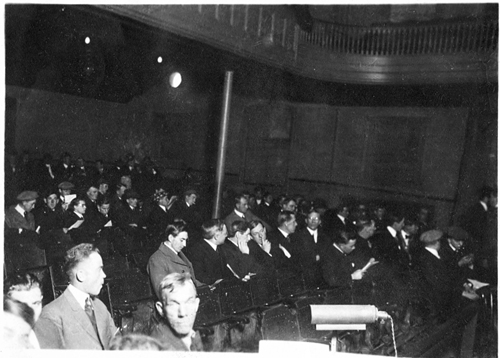 Dec. 15, 1913: Scranton welcomed back burlesque at the Star Theater after a very brief absence.
The theater’s manager, G. Nelson Teets, arranged for a night of “Nightingales” at the venue inside the Assembly Hotel, 314 Linden St. The “Nightingales” consisted of Millie DeLeon, aka the queen of American burlesque, and Dorothy Collins. Also performing were William Jennings, Artie Lewis, Ernest Fisher, Larry Doyle, Billie Leonard and Kittie Morris.
This big show washed away the fears of just two weeks earlier when Teets went missing. It was believed he went to New York City to arrange bookings for the theater, but he left no definite word about his plans with his employees. They feared that they would not be paid and would be out of work. But to their surprise when they got to the theater, they found their full wages.
DeLeon’s act, “The Girl in Blue,” gained the attention of the Rev. Dr. George Wood Anderson, D.D., pastor of Elm Park United Methodist Church. Anderson was in the audience when burlesque came back to the Star.

The next day, Anderson penned a letter to Scranton Mayor John Von Bergen expressing his thoughts on the show and asking Von Bergen do something about it. Von Bergen didn’t respond to the letter.
Anderson then brought the matter to the Scranton Ministerial Union. The ministers decided that they would attend each performance of the show until the city closed it down or their presence caused the loss of patrons at the theater. The group sent Von Bergen a letter to let him know their plan but again received no reply.
Despite the appearance that Von Bergen was ignoring the clergy, he was looking into the matter. On Dec. 23, Von Bergen had Scranton Police Superintendent Lona Day check on the theater and ask to see its operating license. Teets told Day that the license had expired Oct. 1 and that he intended to renew it immediately. Von Bergen, however, said the license would not be renewed.
On hearing the news, Anderson told The Scranton Times that “it is undoubtedly a great victory and I am glad that it came through the regular channels, the city authorities, and that the union did not find it necessary to resort to legal action.”
On the morning of Christmas Eve, Teets went to Von Bergen and asked that the order be rescinded. But Von Bergen said it was not up to him and that Teets should speak to the Rev. Dr. Griffin W. Bull, another member of the Ministerial Union. Teets did and promised that if they allowed him to keep the production running until Dec. 27, he would make sure they put on a “clean and decent show.”
After the mayor learned of Teets’ assurance, he told the police superintendent to allow the theater to operate until Dec. 27.
The Star reopened in the new year, but by Feb. 20, Scranton’s new mayor, E.B. Jermyn, had revoked the theater’s license after reading a transcript of the dialogue in the acts.
The Star rose again in December 1914 under the management of H.W. Storm, who said its shows would “be clean and refined.”