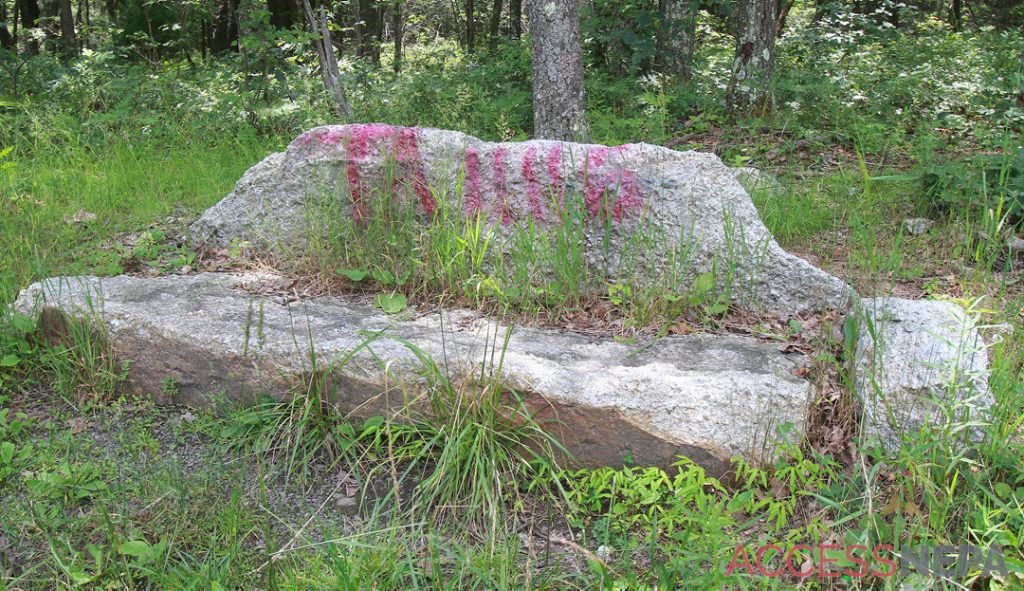 Folklore and flu: Tale of the Stone Couch has a pandemic twist

Like most urban legends, the story of Weatherly’s Cursed Stone Couch has multiple versions.

The first variation is that a Native American woman came across a rock formation on what is now Eckley Road, near the border of Carbon and Luzerne counties. When her baby died on the rock, the woman put a curse on it.

The second variation, more relevant to current events, takes place during the 1918 flu pandemic. While a vicious strain of influenza spread across the world and killed millions of people, a man was driving down this remote road to take his sick wife and child to the hospital. Realizing that they wouldn’t make it in time, the man made a seat out of rocks so his family could rest comfortably in their final moments. Ever since then, the Cursed Stone Couch has been, well, cursed.

According to the legend, if you sit on it once, mysterious scratch marksappear on your body. Sit on it twice, and a loved one dies. Sit on it three times, and you die.

“Suffice to say,” Birshell said, “I am still alive.”

The legend of the “couch” has bridged the gap between one pandemic and another. On June 4, 2020, Birshell visited the Cursed Stone Couch and filmed it for her YouTube channel, DD Explores, in which she explores unique historic places throughout northeast Pennsylvania.

But the Cursed Stone Couch is more bizarre than any old cemetery or abandoned mineshaft.

“Creepy-looking, ain’t it?” Birshell says to the camera. “Come on, let me tell you about it.”

Birshell first heard of the legend in high school, but she says that the legend, passed down through generations, is dying out. Much more urgently, so is the memory of the 1918 flu, the event that partially inspired the legend.

Just ask Jake Wynn, a Williamstown, Dauphin County, native who is the director of interpretation at the National Museum of Civil War Medicine in Frederick, Maryland. When Wynn brings up the 1918 pandemic, most people have never heard of it. To the majority of Americans, he said, it is either forgotten or merely an “anecdote,” something you can tack onto a local legend.

“I suspect that won’t be the case anymore,” Wynn said.

How did the influenza of 1918, one of the most devastating events in the history of Schuylkill County, get folded into a bizarre piece of local folklore? The true story of the 1918 flu pandemic in Pennsylvania’s coal region is far more complex, tragic and resonant than legends of death from a stone “couch,” especially in the middle of the COVID-19 pandemic.

“Societies have different ways of dealing with tragedy,” Wynn said, “and myth has long been a way to try to make sense of horror and death on such a massive scale.”

Wynn studies the local impact of the 1918 flu and frequently posts about it on his blog, Wynning History. His great-great-grandmother died of flu while volunteering at the emergency hospital in Williamstown, one of many created created at the time to handle the influx of flu patients.

“She risked her life to save others and died in the process,” he said. “It fascinated me.”

The 1918 pandemic devastated the anthracite region. More than 400 people died in Pottsville, 338 died in Hazleton and thousands more were hospitalized. According to James Haluska Jr., assistant director of the Schuylkill County Historical Society, this was because the region was full of coal miners whose lungs had already been weakened.

“When the flu turned to pneumonia,” Haluska said, “their lungs did not have much room for the fluid.”

A Schuylkill County native living in Seattle, where residents were required to wear masks, wrote a letter to the Pottsville Republican. If the flu was as bad in Seattle if it was in Minersville, he wrote, the people of Seattle “would have to be encased in a sack, head, feet and all.”

The Schuylkill County native finished his letter complaining that flu may have been an unpleasant way to die, but masks were “torture.”

Meanwhile, Schuylkill County doctors were reportedly working 20 hours a day. Families were wiped out. Newspapers described seemingly endless lines of ambulances, hearses and funeral processions. Undertakers could not make enough coffins to keep up with demand. In 2015, a mass grave was discovered during road construction in Schuylkill Haven. The current theory is that it was for 1918 flu victims. So many people died in such a short period of time that not everyone could get an individual burial.

Novelist John O’Hara, one of Pottsville’s most famous sons, was 13 years old during the pandemic. His memories of it inspired his short story, “The Doctor’s Son.”

“The mines closed down almost with the first whiff of the influenza,” O’Hara wrote. “Men who for years had been drilling rock and had chronic miner’s asthma never had a chance against the mysterious new disease, and even younger men were keeling over.”

By October 1918, every school, church, saloon and store in Schuylkill County was closed. The closure of the mines created a shortage of coal that in turn created fear of a winter without heat.

There was little opposition to public health measures because the nation was fighting both the pandemic and the First World War. Americans, filled with patriotic spirit, were willing to do their part in both conflicts.

“Today, we have none of that,” Wynn said. “Instead, a bitterly divided nation uses any opportunity or crisis to bash their political opponents even if that means resorting to conspiracy theories and ignoring the medical realities that are staring us all in the face.”

That is not to say that there were no conspiracies in 1918. Germany, America’s enemy in WWI, was blamed for the outbreak. A September 1918 headline in the Pottsville Journal claimed that the flu originated from “Hun U-Boats.” In fact, the war is why the 1918 pandemic is often, and erroneously, called “Spanish flu.” Spain was neutral in WWI, and one of the few countries that could accurately report on the flu without wartime censors getting in the way.

“Governments deemed it too important to protect this information lest it give the enemy psychological or propaganda victories,” Wynn said.

Candidates for the true origin of the pandemic flu strain include China, the United Kingdom and even the United States.

Censorship also came close to home. An Oct. 17, 1918, article in the Pottsville Republican said that “health authorities” told the newspaper not to disclose death numbers in order to avoid “panic.”

“I suspect that in Pottsville and surrounding communities this censorship had little impact,” Wynn said. “If only because the outbreak was so bad that nearly everyone knew someone who was sick or was sick themselves, and knew many people who died. It impacted every single person in Schuylkill County at a close and visceral level.”

The taste of iodine

Across the coal region, emergency tent hospitals, like the one that Wynn’s great-great-grandmother worked in, combatted the pandemic. A reporter for the Pottsville Republican wrote about conditions in one of these makeshift hospitals. He described children losing their parents and a mother screaming for her child, who died the day before. He described the taste of iodine, which was “terrible” but “did the work, so why complain?”

He also observed that the flu brought people together. Many of the nurses who cared for him and other patients were not nurses at all, but local women who joined the fight against the flu. He saw a washerwoman and “an exclusive society woman,” both emergency nurses, talking to each other on the same level. Women of all social classes were cooking, cleaning and caring for the sick.

“Some of the persons who have been judged as the most heartless,” the reporter wrote, “were the most tender, when it came to assuaging the grief of the bereaved ones.”

It sounds a lot like the “we’re all in this together” rhetoric that we have heard through the worst of COVID-19.

“Residents, medical personnel and officials did their best in communities like Pottsville and Minersville to manage the pandemic they were experiencing,” Wynn said, “and did a remarkable job in quite possibly the worst situation imaginable.”

He said that COVID-19 outbreaks in cities like New York and Los Angeles are “tame” compared to what the small towns and mine patches of Schuylkill County experienced in 1918.

“It really is sobering and incredible what the nurses and doctors faced at tremendous personal risk.”

In a blog post about this 1918 report, Wynn wrote that “there’s only a matter of time” before the next pandemic. That blog post was written on Sept. 13, 2018.

“It would be naïve to believe that this was not possible again,” Wynn said. “Viruses don’t care whether or not politicians or entire countries, like China, lie about them. Viruses do what viruses do.”

Philadelphia was hit harder by the pandemic than any large city in America because authorities held large gatherings in support of the war effort while downplaying signs of an outbreak. Wynn suspects that “trainloads of people” traveling from Philadelphia brought the first flu cases to Schuylkill County.

Not if, but when

The 1918 flu moved so quickly that it disappeared about as quickly as it came. Come November, Pottsville newspapers took on a more hopeful tone.

“Some scholars liken it to a forest fire that ran out of fuel,” Wynn said.

Waves of influenza continued to hit communities across America in 1919 and 1920, but the worst was over. All told, 17,000 people in Schuylkill County contracted influenza and several thousand died. The pandemic created 3,000 orphans. Ten percent of the county was hospitalized, and Wynn estimates that another 10% recovered at home because hospitals were too full to accept them.

As the Roaring ’20s began, Schuylkill County, along with the rest of the country, wanted to forget what they went through. Over time, the so-called “Spanish flu” was forgotten.

Over 100 years later, Wynn believes that the story can teach future generations, even though his warnings of a new pandemic have already been ignored once.

“I’ll emphasize that it is going to be supremely important to study the 2020-21 pandemic in order to be better prepared for the next pandemic,” he said. “It’s not a matter of if but when and how severe.”