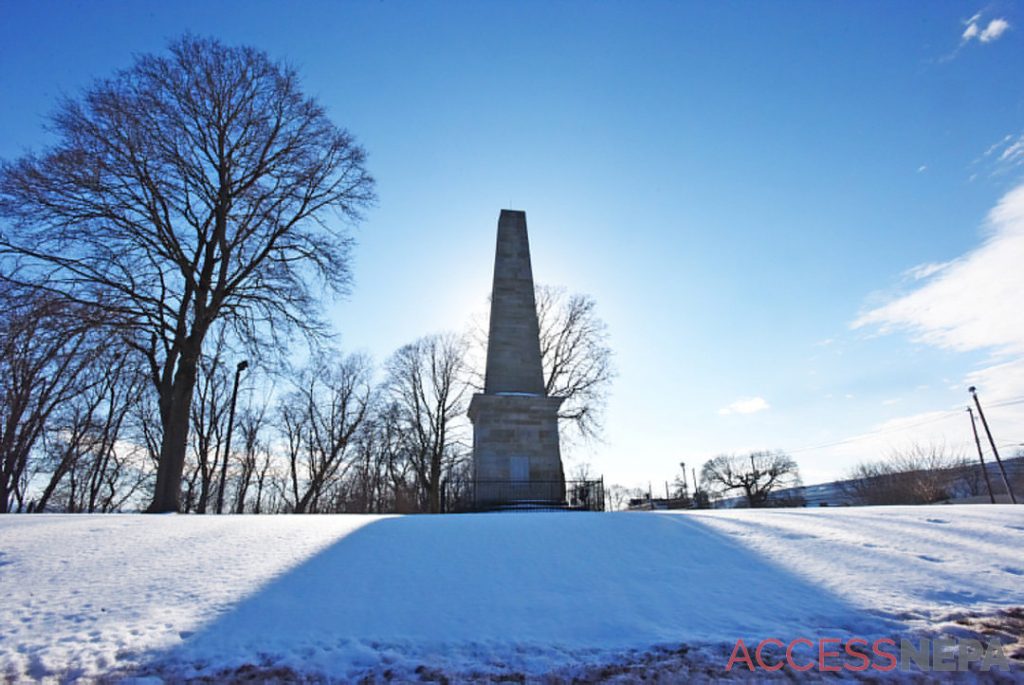 Battle of Wyoming: Bloody moment in the history revisited

The Wyoming Valley, once known as Wyomink by the original owners, was part of the state of Connecticut. The valley was wracked by the Yankee/Pennamite Wars, which pitted Pennsylvania against Connecticut in a grab for the valley. Eventually, the land became part of Pennsylvania.

But this came later. In 1775, the two protagonists stopped killing each other in order to fight the British in the War for Independence.

It is now the summer of 1778, the British want the Wyoming Valley because they know it is the place that provides much of the food for General George Washington’s Army. They have an alliance with the Native Americans, mostly Seneca, who believe they were cheated out of this land by both Pennsylvanians and the Connecticut Yankees. The British have told them that if they fight for them, they will regain their land. The choice is simple.

The British also have Loyalist (Americans fighting for King George III) Rangers, and Tories (those civilians loyal to the king) fighting with them. Major, later to be Colonel John Butler, the assistant head of the Indian department, now commanding this force, has assembled somewhere between 800 and 1,000 at Fort Niagra in upstate New York and will begin to follow the Susquehanna south to the valley for the attack. The force also includes some British regulars.

The force arrived at Tunkhannock on June 29 and camped along Bowman Creek. The next day, a force of Native Americans proceeded to what is now Harding along Route 92 and ambushed Stephen Harding Jr., Benjamin and Stuckley Harding, John Gardner and a boy named Rodgers in a cornfield near the present Harding municipal building. Benjamin and Stuckley were killed, John Gardner was captured, and Stephen Jr. and the Rodgers boy escaped.

The force moved downstream to Sutton Creek and captured James Hadsell Sr., Danial Carr, and a Black servant. They were taken to the village of Orange where they were tortured and killed. James Hadsell Jr., his brother, John; Ebenezer Reynolds, and Danial Wallen returned from working on an island in the middle of the river. They were attacked, and James Hadsell Jr. was killed. The others escaped and made it to the Fort of the Forty to tell the story. This was known as the Harding Massacre.

On July 1, Colonel Nathan Denison, commanding the 24th Connecticut Militia, led a party to the massacre site to recover the bodies. Also, Major Butler took over the home of the Wintermute family (known Tories) site on present day Susquehanna Avenue, and used it as his headquarters. Also, Fort Jenkins, located in West Pittston by the Fort Jenkins bridge, was surrendered. In the meantime, settlers in the valley proceeded to Fort of the Forty for protection and remained there until after the coming battle.

Demand for surrender of valley

On July 3, Major Butler sent messengers to demand the surrender of the fort as well as all other blockhouses and forts in the valley. Colonel Denison refused and had the militia gather at the fort. He turned command over to Colonel Zebulon Butler (no relation to John), who lived in Wilkes-Barre and was on leave from the Continental Army.

While the officers in the fort discussed whether to attack the forces now burning farms, crops and property, or wait for reinforcements which they knew would be here within a day or two, Lazerus Stewart, the leader of the Paxtang Boys, who was given refuge in the valley after arriving from Lancaster a few years before and became good friends with Denison, accused both Denison and Butler of cowardice.

It was now a matter of honor, and so the officers voted to attack. 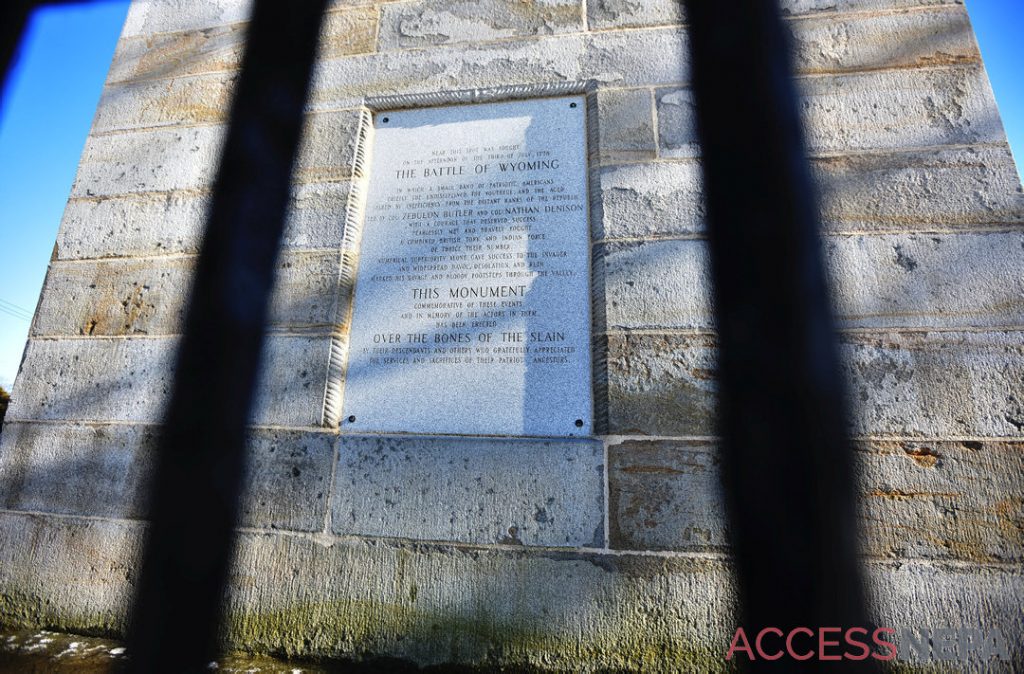 SEAN MCKEAG / STAFF PHOTOGRAPHER
A monument recognizes the Battle of Wyoming, which took place in 1778.

A march toward infamy

About 300 to 400 men marched out of the fort and followed the Great Road north toward Exeter. They stopped at a bridge over Abrams Creek and discussed whether to continue. Once again, Stewart made the same charge, and so on they marched. The Rangers had set Wintermute’s home on fire in a ruse to make the militia think they were retreating, but in reality, they hid behind a fence nearby. The militia got off three good volleys while the Rangers got off one. The militia took up a battle line on present day Schooley Street, while the Rangers lined up on Valley Street. For a while, the militia seemed to be winning the day, when suddenly, from out of a swamp on the militia’s left, came Butler’s Native Americans. Colonel Denison ordered the militia to refuse the line, but due to the noise, smoke and confusion, the orders were misunderstood and the militia began a retreat.

Now the Rangers and Natives were getting behind the 24th and the retreat was turning into panic. Many men were killed or captured on the battlefield and a few made it to the safety of the river and woods. Some swam to Maconhock Island only to be followed by the Native Americans, who show no mercy. It was on the island, that after reaching safety and being promised no harm, some men were coaxed back to former friends and even brothers who were loyal to the king. When these men came back, they were immediately shot or tomahawked by these brothers and friends. About 60 men made it back to the fort. Among them were Colonel Denison and Colonel Butler.

Sixteen captured men were taken to a rock near the present Eighth Street Bridge, where they encountered Queen Esther, half white, half Native American priestess and friend of Denison. Angered over the death of her son, killed on July 1 by the militia when they searched for bodies from the Harding Massacre, she reportedly made the prisoners stand or kneel around the rock with their hands tied behind their backs and watch as each one was made to put his head on it to be bashed with a club. Two men escaped to tell the tale. A state historical marker at the site recounts the story today.

On July 4, Major Butler asked for the surrender of the fort. Colonel Denison stalled for time in order to give Colonel Butler and other Continental soldiers time to escape so as not to be made prisoners of war. That afternoon, articles of capitulation were signed at the Fort of the Forty. These articles surrendered all forts in the valley. Major Butler promised no harm was to come to the settlers, but as soon as he left the fort, plundering and stealing began. The settlers began to leave via the river and over the mountains for places like Easton, Stroudsburg, and some even went back to Connecticut.

On July 7, the Rangers, Natives and others loyal to the king left the valley to return to their home base. The valley was virtually deserted, except for the dead, who remained on the field until October. For a short time, the original owners of the land owned it again.