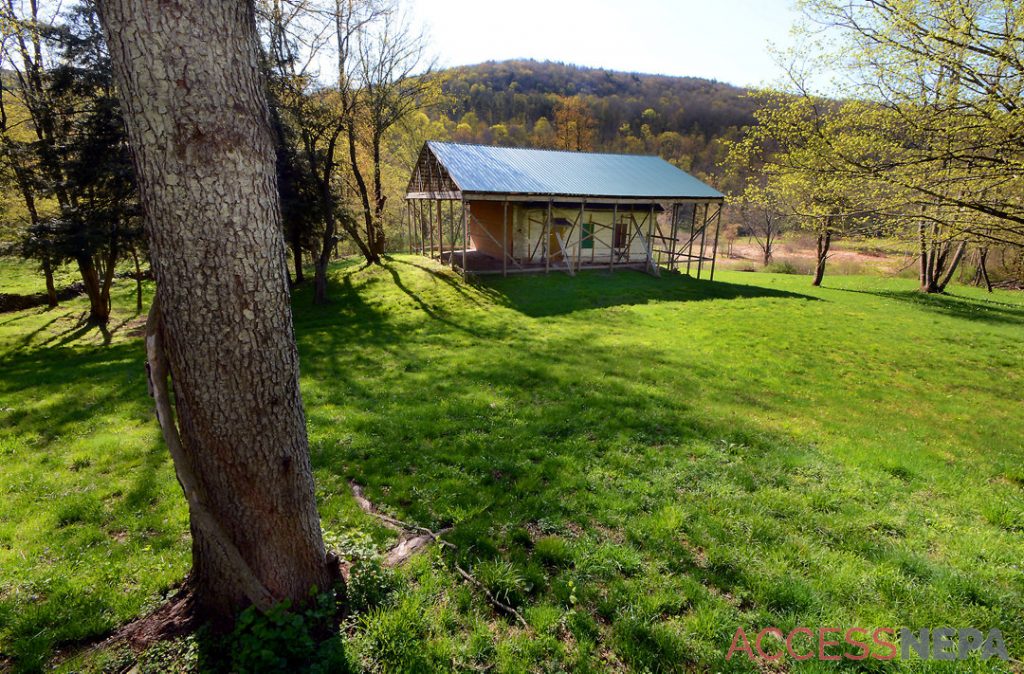 By 1886, the year that Sumner B. Dennis came to Wilkes-Barre, the 153-acre Perkins-Dennis family farm in Susquehanna County was already nearly a century old. Prince and Judith Perkins, free African Americans from Connecticut, and the first settlers in what is now Brooklyn Twp., started the upper tier of the farm in 1793. Prince had notable early American lineage. He was a Revolutionary War soldier and the nephew of Gershom Prince, who was killed in the Battle of Wyoming. Perkins’ son-in-law was also a Revolutionary War soldier and is buried in the Perkins-Dennis cemetery on the farm.

In 1858, Prince and Judith’s granddaughter, Angeline Perkins Dennis, and her husband, Henry W. Dennis, expanded the farm, buying 100 acres on the lower tier. Henry was also from New England. His father, James Dennis, served during the War of 1812.

The farm is listed on the National Register of Historic Places. It’s rare as a farm founded by free African Americans and owned by the same family for more than 200 years. Four generations of the Perkins-Dennis family made a living on the farm, producing fruit, corn, winter wheat, potatoes, hay, and maple syrup; and raising dairy cows, oxen, horses, swine, sheep and poultry.

The farm was the birthplace of Sumner B. Dennis, Henry and Angeline’s youngest son, who would go on to make history as Wilkes-Barre’s first Black postman. Sumner moved to Wilkes-Barre in 1886. Before he took the test for the postal service in 1905, he clerked at William J Marvel’s food market and was appointed nightwatchman at the county jail.

By all accounts, Sumner Dennis was a hardworking, God-fearing Christian gentleman. He retired from the post office in 1932 after 27 1/2 years, but stayed on as president of the Letter Carriers Association. Postmaster Henry Merritt, speaking at a testimonial for Sumner, told the audience of 75 family and friends — including Sumner’s customers on his Rolling Mill Hill and South Wilkes-Barre delivery routes — Sumner was the most “modest, unassuming” carrier on his staff. Sumner was sent off with a reclining chair and a bathrobe.

Sumner died in 1950 at 83. He and his wife, Mary, raised five children at their Davis Place home. His obituary described them as Norman, a post office employee; Edith, a public school principal in Harrisburg; Marian Dennis Polk, a retired teacher; Hope, a psychologist in Indiana and a graduate of Northwestern and the University of Michigan, and Carl, at home.

After his death, the Postal Record, the national publication of the US mail carriers, wrote, “Brother Sumner Dennis, one of our retired carriers, recently passed on to his final reward. His cheerful disposition and kindly acts to the less fortunate will make him live for a long time to come in the memories of those befriended by him.”

We know all this about Sumner Dennis thanks to his granddaughter, Denise Dennis, author, historian, and president and CEO of the Dennis Farm Charitable Land Trust, established to preserve and protect the farm and its history. Though Sumner died before Denise was born, she grew up hearing stories about him as a “serious and dignified man,” revered to this day by his descendants.

Denise said her family’s history is well documented. “Sumner’s son, Norman Dennis, taught me our family history when I was growing up. My grandparents, Norman and Harriette Payne Dennis, legally adopted and brought me up. Also, our family saved things. We would have even more, if we hadn’t lost so much during the 1972 Flood. Fortunately, Norman Dennis saved the family photo album.”

Among the items saved are the family Bible, photographs, newspaper clippings, Sumner and Mary Kinslow Dennis’ original 1895 marriage certificate, school books from the school at Oakley Crossing where Sumner and his brothers were students, and books from the collection of Henry W. Dennis, Sumner’s father, some of which are now in the collection of the Smithsonian’s National Museum of African American History and Culture. The museum also displayed an exhibit about the Perkins-Dennis Family in its 2015 preview exhibition, “Through the African American Lens: Selections from the Permanent Collection.”

“It was the first exhibit in the exhibition,” Denise said. “Their curators selected approximately 30 of our artifacts for their permanent collection, of which three artifacts, three books, and four photographs are in this exhibit.”

Denise explained Sumner was well known and respected during his life in Wilkes-Barre, where he was an active member of the Bethel AME Church. Denise was brought up in the church and has “wonderful memories” of her childhood. 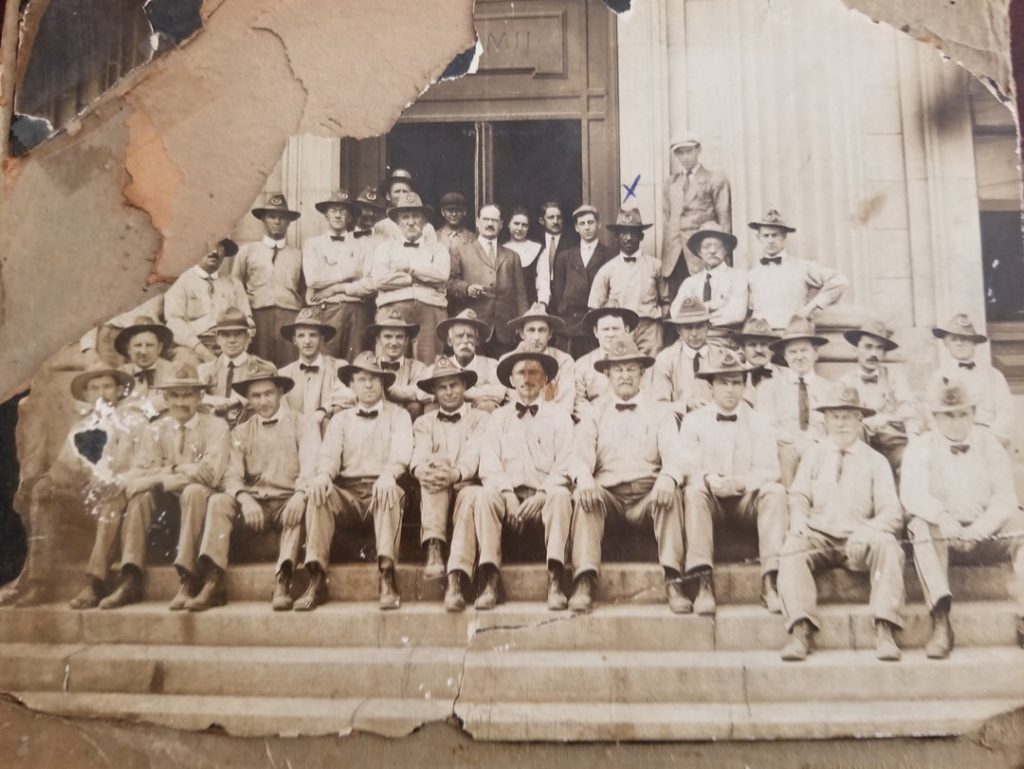 COURTESY OF DENISE DENNIS
The Dennis Farm One hundred years ago: Sumner B. Dennis, standing in the top row with an ‘X’ mark above his head, with his USPS colleagues in front of the old Post Office administrative building on South Main and South streets, Wilkes-Barre.

“I’ve always known that my great-grandfather began working for the Post Office, in 1905, when Theodore Roosevelt was President of the United States. Even though he passed away before I was born, when I was growing up in Wilkes-Barre, most of the African American community in Wilkes-Barre knew Sumner Dennis had worked for the Wilkes-Barre Post Office and was the first of his race to do so. We have a newspaper clipping about his retirement in the family album.”

In 2001, Denise and her aunt, Hope Dennis, established the Dennis Farm Charitable Land Trust, a 501c3 non-profit for the historic preservation of the Dennis Farm. Denise is the president and CEO. In an email, she explained the goals of the trust.

“Our goals are to restore the farmhouse, transform it into a museum and to construct an interpretive center where visitors (we have many requests from researchers, scholars, school groups and cultural heritage tourists) can learn about the history of the site. The center will include a lecture hall and gallery and will host annual or semi-annual symposia. We also plan to have nature trails on designated sections of the property. We would also like to build an endowment for the future.

“The National Endowment for the Humanities announced that the Dennis Farm Charitable Land Trust is the recipient of a $400,000 matching grant to help transform the Dennis farmhouse to a museum, and we are currently in a capital campaign to raise the matching funds. This summer, the National Trust for Historic Preservation’s African American Cultural Heritage Action Fund, also, announced that we are the recipient of a NTHP grant that will help us to begin work on the farmhouse museum.”

To learn more and/or make a donation, visit thedennisfarm.org.