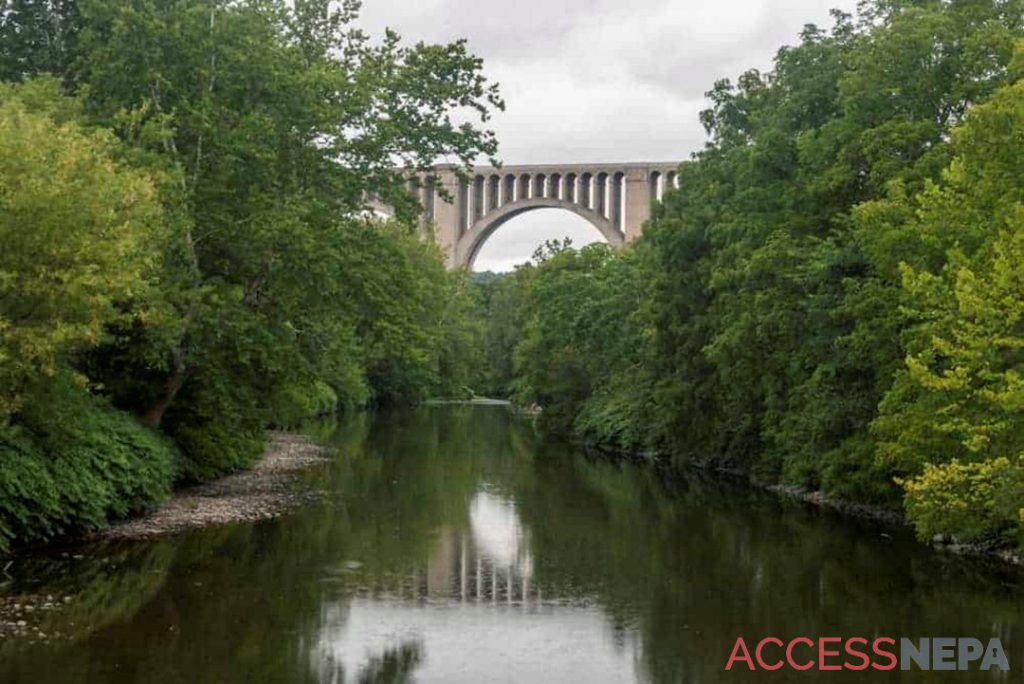 The Tunkhannock Creek, a local body of water which many area residents take for granted as they cross it en route to work and other routines, is a finalist for Pennsylvania ‘River of the Year,’ in a contest sponsored by the Pennsylvania Department of Conservation and Natural Resources.

“The creek speaks for itself in terms of beauty,” Endless Mountains Heritage Region Director Cain Chamberlain said. “Winning this award would mean a great deal to people working on conservation efforts, so we hope people get out and vote.”

Seared in the public consciousness 105 years ago by the massive Tunkhannock Creek Viaduct, or Nicholson Bridge, the creek has sustained people for thousands of years.

How do we know?

Nicholson residents Hugh and Norman Saxton, during much of the 20th Century, worked in the shadows of the largest reinforced concrete bridge in the world collecting more than 2,500 Native American artifacts that reveal generations of people sustained by the creek.

The Tunkhannock Creek is in reality three creeks – the main stem, the east branch and the south branch.

The main stem begins at Cheraine Pond in Jackson Township, Susquehanna County, and flows through 42 miles of mostly rural countryside leaving its imprint on places like Jackson, Gelatt, Smiley, South Gibson, Glenwood, Nicholson, Starkville, East Lemon and Dixon, and on down to Tunkhannock, which itself means the meeting of waters. It is there, where the creek joins the North Branch of the Susquehanna River, which was named River of the Year in 2016.

The East Branch of the Tunkhannock Creek begins at Ross Lake in Herrick Township and finds its way down stream along Elk Mountain which supports a ski resort before sustaining places like Clifford, Lenoxville and joins the main stem just below Glenwood, covering a distance of about 19 miles.

The South Branch of the Tunkhannock Creek is about a 22-mile waterway that emerges near Montdale at Chapman Lake and flows west through places like East Benton, Wallsville, Factoryville, and Bardwell where it joins forces with the main stem near the present site of Deer Park Lumber. and just below that site is LazyBrook Park which had its genesis in the ferocity of a flooding event in 1996 that wreaked severe havoc on a former housing subdivision.

The South Branch yields some of the best opportunities for recreation, particularly after it was dammed up in 1968 to form Lackawanna Lake at Lackawanna State Park, which was dedicated in 1972. The creek also borders the Keystone College campus which has turned it into something of an outdoor classroom while also fostering world-class trout fishing. Hiking among the glacial deposits at Little Rocky Gorge is also not to be missed.

Valerie Titus, Keystone assistant professor of wildlife and environmental biology, notes that one cannot underestimate the value of hands-on field experience and is excited for her charges of the possibility of new found attention that winning the ‘River of the Year’ competition could bring.

Long utilized as an in-service training space for the region’s ecology teachers, Titus said she hopes more people will take care of a precious asset she realizes some people take for granted.

Bill Kern, director of the Countryside Conservancy, which takes care of a lot of the Tunkhannock Creek’s conservation efforts, said that winning the award could help make the creek more accessible to lots of people for years to come.

“Protecting the land around the creek is a main priority of ours,” Kern said. “All the land by the creek is land that we are protecting. Maintaining the water quality is also a huge point of focus for us, something that the grant money will help us a lot with.”

If the Tunkhannock Creek gets the most votes, EMHR will receive a $10,000 grant to help fund conservation efforts, and host activities in the spring and summer, something that Chamberlain is already planning.

“We know that kayaking is a big activity, so if the creek wins, EMHR wants to have some sort of paddling event,” Chamberlain said. “It would be fun for lots of people and a celebration for a big honor.”

“It’s a special body of water that means a lot to a lot of people,” Kern said. “The conservatory has done a pretty good job of taking care of it, but this grant will allow us to do even more things.”

Chamberlain added, “I think winning would mean a great deal to a lot of people working on the conservation efforts. That stretch of water has a lot of history, and it’s something that we want to be able to have people enjoy for a very long time.”

Tunkhannock Creek is one of five finalists along with the Lehigh River, Shenango River, Buffalo Creek, and Loyalhanna Creek. Online voting continues through Friday, Jan. 22. You can vote online at www.pariveroftheyear.org/2021-river-of-the-year/vote-for-a-2021-river-of-the-year. You must have a valid email address to vote, and one vote is allowed per email.

“There are a lot of people locally who are extremely passionate about this place and what it brings to the area,” Kern said. “All I can say to them is get out and vote.”