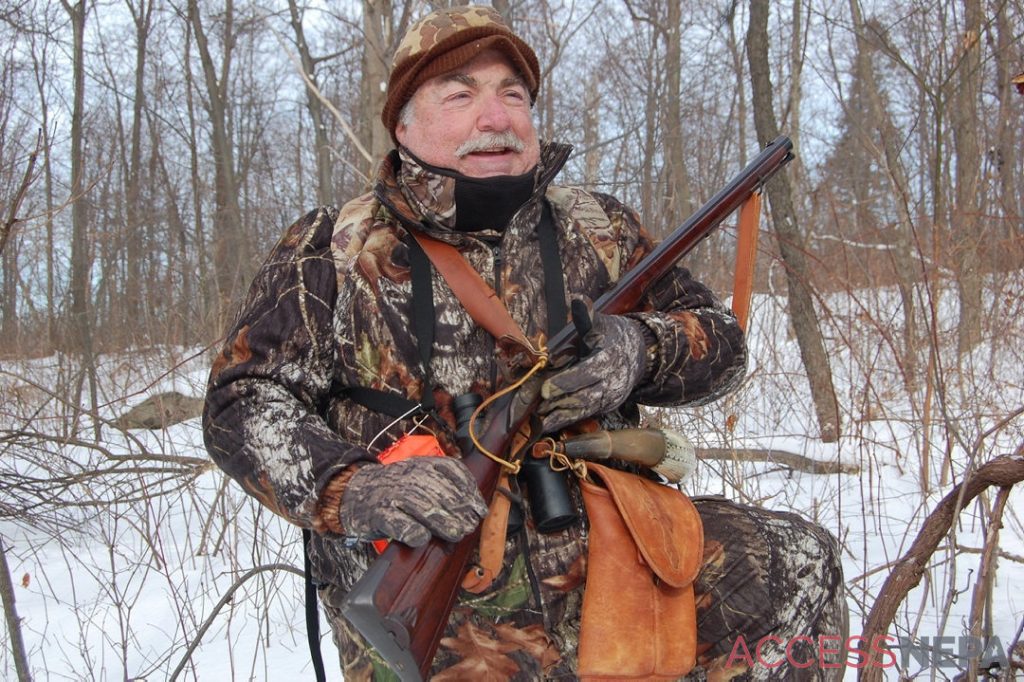 No matter how cold my hands get this week because of poor circulation caused by Type 2 diabetes, I’ll be in the woods a time or two or three for the opportunity to take a deer with one of my flintlock rifles, but more importantly to reminisce about previous flintlock seasons dating back more than 40 years.

In the early 1980s, a rag-tag group of “irregulars” had been among the ranks of those who celebrated Pennsylvania’s post-Christmas flintlock deer season by dressing in period hunting attire of the Colonial Era on the opening day, New Year’s Day and the final day. Many in the group also hunted with one of their flintlocks during the regular firearms season, and while all had degrees of success, there is nothing like the feeling of hunting in the special season.

When becoming the proud owner of a .54-caliber Southern Mountain poor boy flintlock longrifle built by former Catawissa-area resident Dave Motto in 1982, it became my rifle of choice for all firearms seasons. That rifle earned the name “Buster” by taking one Canadian black bear and 28 Pennsylvania whitetails — all with patched roundballs from its 1-in-66 twist barrel.

Carrying that rifle prevented me from taking a buck with the largest rack I’ve encountered while hunting. It had either 10 or 12 points, but the rack was partially obscured by a twist of underbrush as it stood facing me head-on — which at 40 yards would have presented a kill shot with my .30-06 Model 95 Winchester, but would have been a poke-and-hope unethical shot with “Buster.”

After more than 30 years I still have memories of that encounter, which ended with the buck finally moving on without ever detecting my presence. Not once, however, have I regretted my choice to hunt with “Buster,” and best of all, my wife Betty, also hunting with a flintlock, was on a ridge behind me and witnessed the encounter.

Our numbers have dwindled since our informal group came together to honor American history as much as our hunting heritage, and insulated Mosey Oak jackets and bibs have replaced blanket coats and buckskin rifleman shirts and leggings. Those of us who remain have been forced to pick and choose with care where and when our outings occur as we begrudgingly acknowledge the calendar is winning.

Now, when we gather to reminisce about our “shining times,” most of the stories — almost all of which are true — focus on those whose rifles, horns and bags have been retired. One of my favorite hunts was the year my wife took her first flintlock deer with her custom-built .54-caliber fullstock Hawken, but not before having to follow the blood trail.

Flintlock season was our favorite deer season because we enjoyed American history and also because Betty was off from teaching. Although she had shot doe with percussion rifles during October antlerless seasons, in her mind she needed a flintlock kill to truly join the muzzleloader fraternity.

Entering a small patch of woods from opposite ends, I began to stillhunt in her direction and had gone less than 100 yards when the unmistakable “boom” from a charge of 90 grains of 3FFFg powder broke the silence. A few minutes later, five deer could be seen running at full speed through the woods to my left.

When I reached Betty, she was surprisingly composed when she told me six doe had come walking down the logging road to her right. Waiting to get a shot at the lead doe, the deer was less than 30 yards away when she made a double-lung shot with a .535 roundball and was upset the deer wasn’t down.

Having seen five deer running through the woods, I assured Betty the deer was down, but she was going to experience her first class in Tracking 101. Allowing her to do the tracking by following the blood trail in the snow, and in less than 10 minutes — although it seemed like 30 to her — the deer was recovered.

What followed was her first lesson in Field Dressing 101, but the dragging was assigned to me. As we made our way out of the woods to her stand less than 50 yards from where the deer fell, I left for the truck.

That’s when she said, “Boy that deer went pretty far. I guess I didn’t make a very good shot.” Turning toward her with my best are-you-kidding-me expression, I assured her there were five deer — probably still running — that would disagree when they stopped for a head count.

My hope this week is to get a deer for a donation to Hunters Sharing the Harvest and add to more than 40 years of flintlock memories.