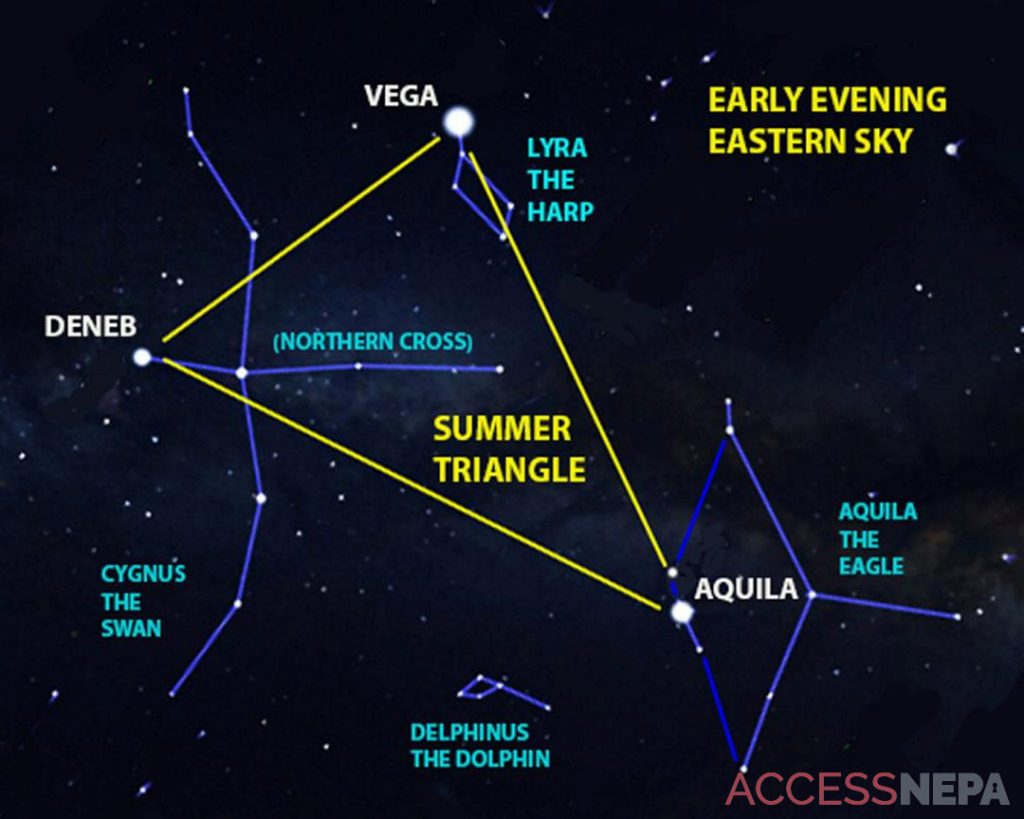 Summer, at least astronomically, is two weeks old. The sun, moving along its path among the celestial sphere, reached its highest point in our sky on June 20. The bad news is that the sun’s maximum midday altitude has already fallen slightly, and dare I say, days have begun to get shorter. Pretend I didn’t say that. The good news is that the best of summer weather is still ahead of us. Well, let’s hope!

While you’re waiting for the Fourth of July fireworks, begin looking for one of the marquee signs of summer in the night sky. It’s the three stars of the Summer Triangle, and they’re very easy to see. Each of the stars is the brightest star from three different constellations. Just look for the three brightest stars you can see in the eastern sky, and that’s it. It’s a wonderful tool to help you find your way around that part of the night sky. Not only that, each of the three stars has its own remarkable story.

The highest and brightest star is Vega. It’s a significant and historical star. It also serves as the brightest star in the constellation Lyra the Lyre, or Harp. Vega’s also the third brightest nighttime star seen in Pottsville. Its brightness is mainly due to its relative proximity to Earth, only 25 light-years away. One light-year equals just less than 6 trillion miles, and is defined as the distance light can travel in one year. So in miles, Vega is a little less than 146 trillion miles away. Believe it or not, that’s considered close for a star! Also, since Vega is 25 light-years away, the light we see from it tonight left that star in 1996, when everyone was trying to get their hands on a Tickle Me Elmo doll!

Vega’s diameter is a little more than 2 million miles across, about 2.5 times that of our sun. It’s also twice the mass of our sun. Most astronomers have concluded that Vega is a very young star, only about a tenth of the sun’s age. In 1983, the Infrared Astronomical Satellite discovered a ring of dust surrounding Vega. This was the first time astronomers saw evidence of a developing solar system around a star. Vega was big news! Later, in the 1997 movie “Contact” with Jodie Foster, Vega was used as the place that humankind made contact with aliens. It’s not confirmed, but Vega may have at least one planet about the size of Jupiter orbiting it.

The second brightest star in the Summer Triangle is Altair, on the lower right corner. It’s also the brightest star in the constellation Aquila the Eagle. Altair’s even closer to Earth than Vega, just under 17 light-years away. What makes Altair remarkable is that it’s a real spinner, rotating on its axis once every nine hours. By comparison, it takes our sun about a month to make a complete spin. It’s whirling so fast that Altair is lopsided. Its equatorial diameter is at least 20% larger than its polar diameter. Many astronomers believe that if it spun much faster, Altair would literally fly apart. There’s no way you can see the lopsidedness of Altair through even the largest of backyard telescopes, so you don’t have to worry about getting dizzy gazing at it.

The third and faintest star in the Summer Triangle is Deneb, on the lower-left corner. It’s the brightest star in the constellation Cygnus the Swan. Cygnus also has the nickname “The Northern Cross’’ because it really looks like a cross. Deneb is anchored at the top of the cross, which in early July is rising on its side. Gaze to the right of Deneb and you can trace out the crosspiece and the rest of the cross.

Even though Deneb is the faintest star in the Summer Triangle, it’s one of the largest and most luminous stars in our part of the Milky Way galaxy. It’s believed to be 200 times the size of our sun and kicking out nearly 200,000 times the light of our home star. If you were to put Deneb in place of our sun, the inner planets Venus and Mercury would be living inside Deneb. Our Earth would be at the outer edge of Deneb, and needless to say, we’d be fried!

Deneb is not as bright as Vega and Altair only because Deneb is much, much farther away. It’s at least 2,500 light-years away, and maybe as far as 3,000 light-years! When you look at Deneb, even with the minimum estimated distance, the light you see from Deneb this summer left that behemoth star around 500 B.C.! Right around that time the Roman Republic was founded, which eventually became the Roman Empire. No one was tweeting back then!

Enjoy the Summer Triangle, available in the evenings the rest of this summer and well into autumn.