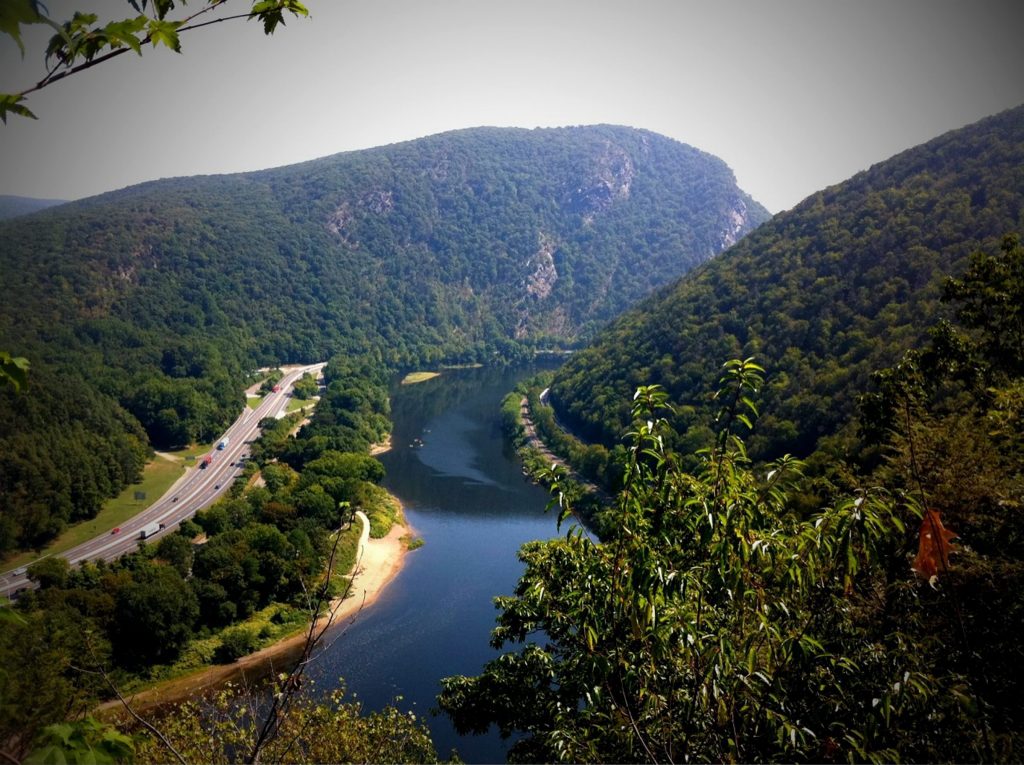 “He should be here any second, but, you know, kids,” said Jack Miller, sitting in his cavernous living room.

He’s talking about his son, Fritz, who’s on his way home from his job in the retail department of Blue Mountain Ski Resort.

Fritz, 23, came home from hiking the entire Appalachian Trail in November. Last summer he hiked from Maine to Schuylkill County with Jack, then hiked the 1,200 miles to Georgia, where the 2,200-mile trail ends.

He points out a painting on his wall of two cowboys riding into the sunset. After a life of traveling, Jack believes he’s riding into his own sunset.

“The morning ride or the evening ride, depending on how you want to look at it,” Jack said.

Fritz walked in and sat on the sofa beside his father.

“This is the last quarter and that would lead to what Fritz is up to and completing the idea of the hikes,” Jack continued.

Completion is important to Jack. His brother, Louie, who died in 1966, was one of the earlier discovered cases of cystic fibrosis.

“It probably made me aware of life,” Jack told Fritz. “I’ve said this to you many times, you go through here one time so you better do the best you can.”

Fritz grew up surrounded by the memories of Jack’s travels.

“For me, it was normal,” he said, “but when you step away from it you realize most of the things in the house are a resemblance of what his past was. My brothers and all of us, we’ve always been travel induced. We always want to live a life of adventure.”

Fritz’s brother, Alex, recently went to Japan to hike Mount Fuji. His older brother, Chris, was an avid camper since childhood. His sister, Kara, spent three months living with the Samburu tribe in Kenya — there’s a book about them on Jack’s coffee table, actually an old butcher shop chopping block. Jack taught his boys to appreciate nature, and all three became Eagle Scouts who knew Schuylkill County’s part of the Appalachian Trail well. It was Fritz who suggested the father-son hike.

“That was always on my map and the aspect of the goal and challenge,” he said. “That’s what led me to it.”

Throughout their journey, Jack and Fritz talked about love, swapped stories and shared personal longings. Jack told his son about growing up in rural Port Carbon, what his grandparents were like, running the family business and making sacrifices so he wouldn’t have to lay off employees. He also talked about Louie’s effect on the family.

“You get a different sense of who they are,” Fritz said about the people you hike with. “It’s like you think of them less as a father and more as a friend. You’re now like partners. Whether it’s the nasty stuff after you’re tired after a long day, or the deeper stuff.” 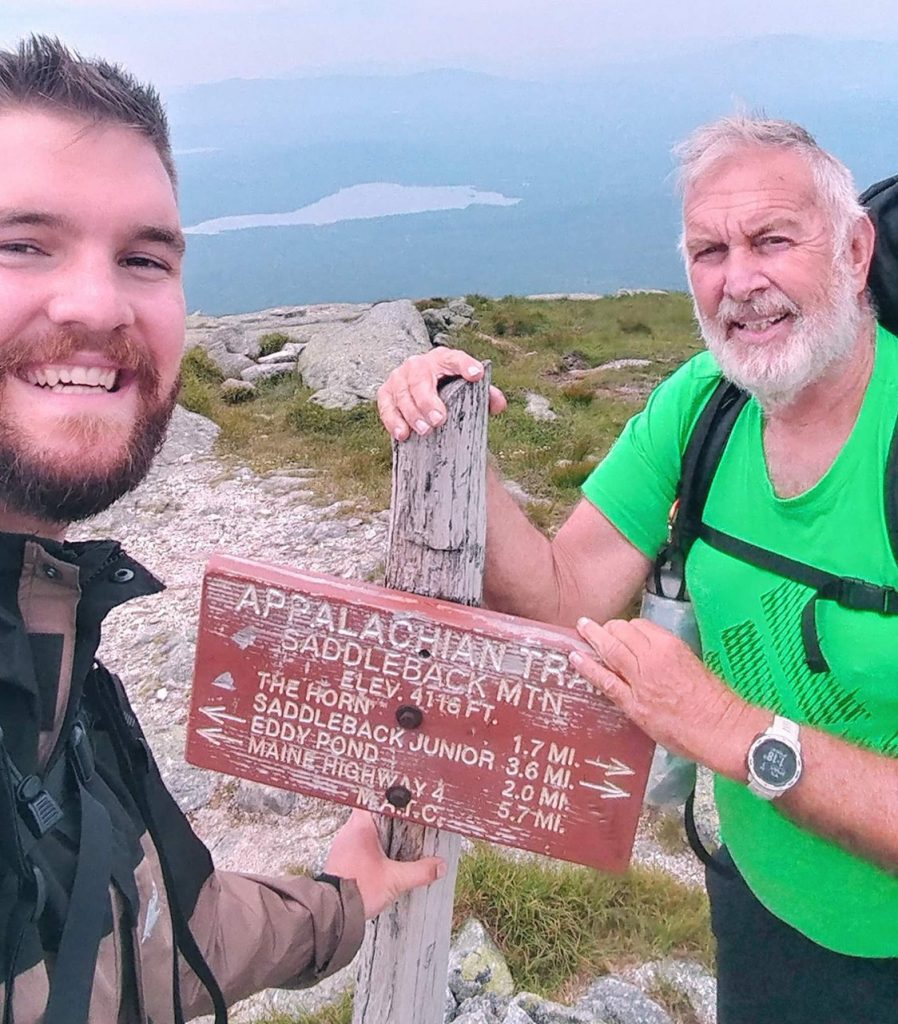 SUBMITTED PHOTO
Fritz Miller, left, and his father, Jack Miller, pose for a photo on Saddleback Mountain in Maine during their hike along the Appalachian Trail.

Jack came home on Sept. 19. From there, Fritz woke up early each morning and hiked all day, every day. The sunny weather he enjoyed with his dad turned into a three-day rainstorm in Virginia.

“I was cold and miserable and all by myself, so I had to keep on walking because I have that goal, that mindset,” he said.

Along the way, Fritz thought about his future and counted the newts he saw to pass the time.

“Especially at the beginning, you’d climb a mountain and you’d get to the top and you’d see an incredible view,” he said. “Then you’d go into the valley and you’d see a rushing stream, white noise that would let you dive deep into thought. You’re just so immersed that you get used to it, like everything. But some things are so spectacular that you have to sit back and look, you know.”

He would also listen to music on his headphones. One day on the edges of Tennessee, he was so immersed in his music and the leaves crunching under his feet that he almost missed the 400-pound bear blocking his path.

“I just stood there for a good five long seconds,” Fritz said. “I looked back and that’s when he caught wind of me and he looked right at me, and then he just started flying down the hill, and for the quickest second I thought I was going to get mangled by that bear. I no longer had my dad to outrun.”

“You were in a cage one night,” Jack reminded his son.

“Yeah, that was cool,” Fritz said, slouching in the sofa with his arms behind his head.

In the Smoky Mountains, known for bear attacks, there are “bear cages” to protect hikers as they sleep. One misty night, he left his supper on top of the picnic table instead of the designated “bear box.” Later that night, he saw a black mass on the picnic table. Terrified, he thought it was a bear, but it was actually a lost hunting dog, so skinny its ribs were visible.

“He was like forging himself on my stove,” Fritz said, “and there’s not a very good way to clean your stove, so basically I had to eat out of this dog-tongued stove for a while.”

Fritz’s journey began on Mount Katahdin in Maine and, on Oct. 29, ended on Mount Springer in Georgia. He got up at 4 a.m. that morning and hiked 32 miles.

“The end is not spectacular,” Fritz said, noting that the view atop Mount Springer is far less dramatic than the one atop Mount Katahdin. “It’s just another normal mountain that you crossed.”

On top of Mount Springer, he was alone. He had walked the Appalachian Trail, but had nobody to share it with. He wanted to go to Amicalola State Park, home of the largest waterfalls east of the Mississippi and the place where many begin the trail, but was too exhausted to hike further. He took a selfie with the plaque that announces that this is the end of the Appalachian Trail — or the beginning, depending on how you look at it. He cooked himself a can of ravioli and sat by himself. He didn’t feel any pride at the time, but he does now.

Along with the ravioli, Fritz got a taste of what’s known as “trail magic” — random acts of kindness along the Appalachian Trail. A pair of hikers offered to drive Fritz back to his hotel. He took a long shower and ate a steak dinner. Jack drove down to Georgia to pick up his son. Jack wanted to drive to Nashville, while Fritz wanted to go to a Florida retirement home to meet family friends, the Dieffenbachs. Fritz won, and the two visited Ken Dieffenbach, a New-Orleans-based plastic surgeon who traveled around the world fixing cleft palates, and his wife, Leigh, his wife and business partner.

“Those people are really explorers and adventurers in their own right,” Jack said.

In March, Fritz plans to move to Boston to pursue a career in management consulting. He’s training to enter the Boston Marathon in April, running for the Massachusetts General Hospital Cystic Fibrosis Center in honor of “Uncle Louie.”

“It wasn’t so much thinking about death,” Fritz said, “but understanding that there’s one life, so you have to enjoy each day no matter how miserable.”