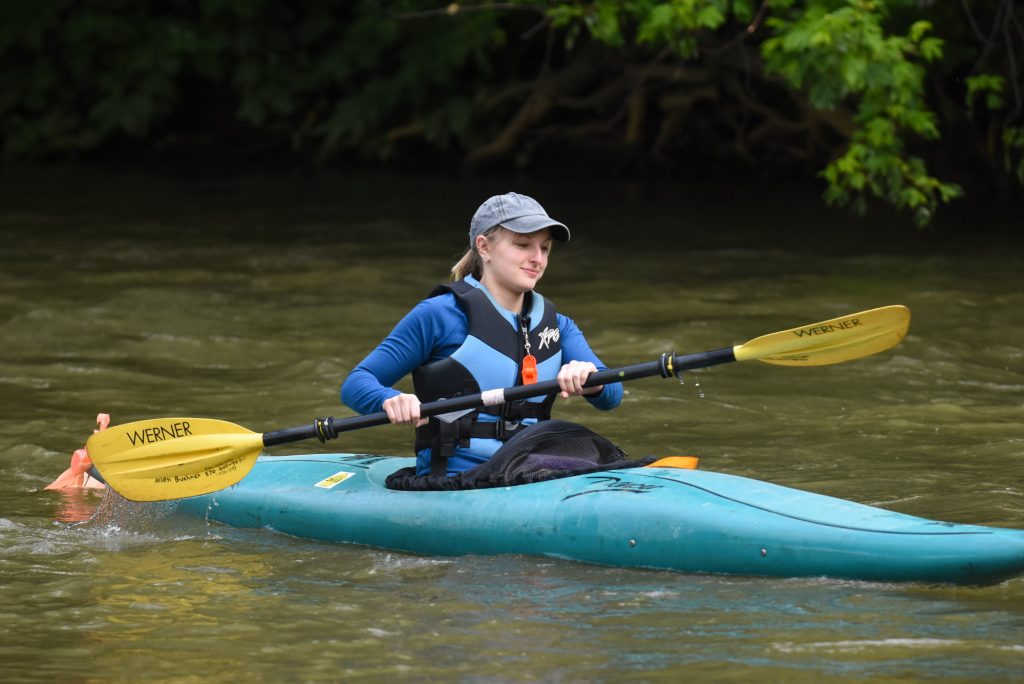 PORT CLINTON — Yes, the show is going on when it comes to the Schuylkill River Sojourn, but the 23rd annual event is being presented in a condensed version this year.

Those who understand the reasons are more than willing to accept any form of a paddling event after last year’s virtual sojourn because of the COVID-19 pandemic. So this year’s theme of “Return to the River” strikes home in every way.

Traditionally the sojourn begins the first weekend in June from The Island in Schuylkill Haven, with paddlers and onlookers arriving Friday evening for a dinner of barbecued chicken and at least one do-it-yourself ice cream sundae. Paddlers would launch Saturday morning for what was a seven-day trip down the Schuylkill, ending Friday at Boathouse Row in Philadelphia.

This year the Schuylkill River Greenways National Heritage Area, which organizes the sojourn, moved the start of the event to allow more time for COVID-19 vaccinations. As a result the event is being held over five days, beginning Saturday, July 31, from Jim Dietrich Park in Muhlenberg Township and ending at Boathouse Row, Wednesday, Aug. 4.

“We look at the Friday night kickoff in Schuylkill Haven as an important part of the sojourn,” Schuylkill River Greenways communications director Miica Patterson said. “With the later starting date, however, we have to start farther downriver since the headwaters tend to have a decreased water flow in late July.

“A benefit of starting later is schools are out of session, making it easier for families to join the incredible experience. Children ages 8 and older are welcome to join the sojourn if they can properly fit a life vest, and there still some individual days open for registration.

“This is an event entire families can enjoy together and combines kayaking, camping, education and games into one exciting event. Everyone is excited about being back out on the river this year, and we anticipate returning to a regular seven-day event next year and getting together Friday night in Schuylkill Haven.’

Participants spend the day paddling the river, stopping along the way for meals and educational programs. In the evening, everyone sets up camp along the water, learning about different river aspects and wildlife and enjoying activities such as a trivia game night and live music.

Patterson said the sojourn helps Schuylkill River Greenways achieve its mission of connecting people to the river so they are motivated to protect it. There are three ways people can join the paddling event for free through the Schuylkill Action Network offering a Diversity Scholarship and Sojourn Steward Scholarship.

Both scholarships cover registration fees and the cost of renting a boat. Schuylkill River Greenways also offers the Bill Trace Scholarship, which is open to a pair who have never paddled the sojourn.

Although there will be no paddling this year in Schuylkill County as part of the sojourn, the Schuylkill River Greenways National Heritage Area made its presence felt this spring with a newly renovated water landing at Port Clinton Park. Part of the official opening was the Port Clinton Paddle, a 7.5-mile journey that 23 paddlers began in Auburn.

“The kayaking community of Schuylkill County heavily uses the Port Clinton Park landing, and it was in desperate need of improvement,” Patterson said. “The previous landing was eroding and has now been transformed into a concrete and asphalt ramp for easier access to the river.

“The area also has new parking with the capacity for 22 cars, a new gravel drive from the parking area to the ramp, new fencing, a new entrance gate, new signage and new trees in the area. Schuylkill River Greenways has invested more than $100,000 in improvements to the area through funding from the William Penn Foundation, Department of Conservation and Natural Resources and Schuylkill County.”

Dietz is a member of the Pennsylvania Outdoor Writers Association. Contact him at outdoors@republicanherald.com