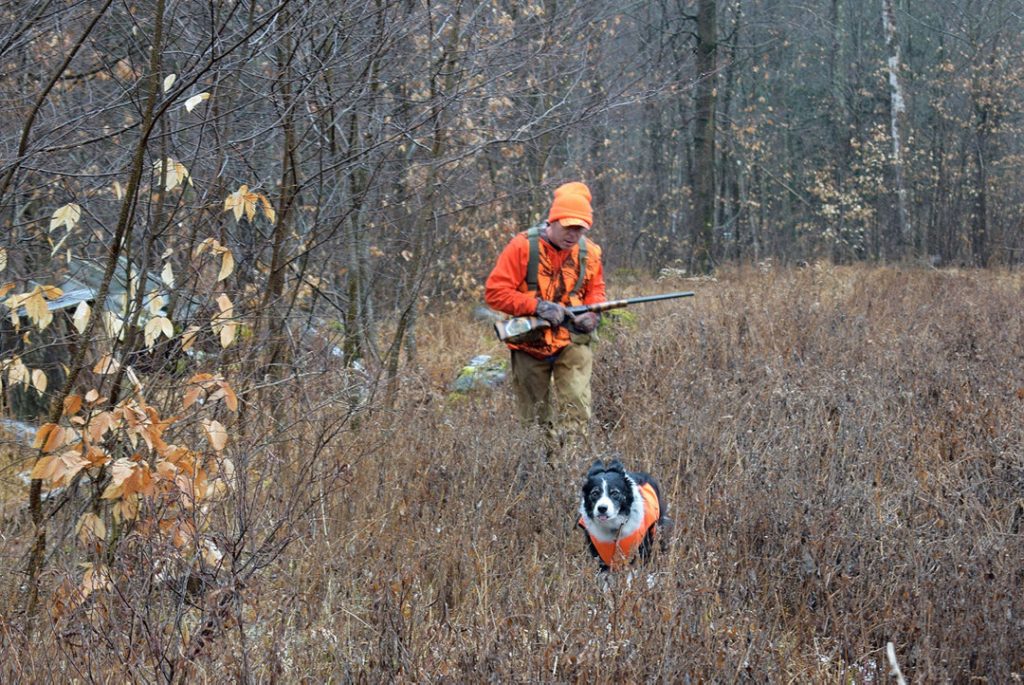 NORTH ABINGTON TOWNSHIP — It’s a few days after Christmas. The weather is cold, but not at all unbearable.

Mike Leggiero of Gouldsboro, accompanied by his dog Stanley, carefully works the regenerating forest cuts and scrubby undergrowth of the Pinchot State Forest in Lackawanna County looking for the telltale patch of white that might give his quarry away. In many ways, it’s like searching for a needle in a haystack as he pursues one of Pennsylvania’s rarest game animals — the snowshoe hare.

For a small, but dedicated, group of hunters the short snowshoe hare season is an exciting chance to harvest a true rarity in the state. While sportsmen often think of getting a bear as a once-in-a-lifetime trophy, harvesting a hare may be even less common.

“I’ve actually had two bears within 15-20 yards of me while hunting — I passed on one last year at 20 yards — and last year was the first time in 15 years I ever saw a snowshoe hare while snowshoe hare hunting,” Leggiero said.

As the southernmost range of the species on the East Coast, Pennsylvania provides decent snowshoe hare habitat in isolated pockets across the northern half of the state. Pennsylvania Game Commission game-take surveys show an average of 3,000 hunters pursued them annually in recent years, with anywhere from 50 to 2,000 of the animals harvested each year. Both the harvest and the number of individuals pursuing hares, however, are on the decline.

PGC small game mammal biologist Emily Boyd says the strongholds for snowshoe hares are the northwestern and northcentral parts of the state. This is due to shrubby wetlands with nearby conifers and high-elevation wetlands and scrub oak barrens in the Pocono Mountains.

“The PGC uses an annual hunter mail survey to monitor game populations across the state,” Boyd said. “This survey indicates that the population is likely relatively stable, though the decline in hunter participation has warranted some additional surveys, and there was also a study completed a few years ago which suggested that there has been a decline and northward contraction of our snowshoe hare populations in Pennsylvania.

“More work is needed to assess the extent of this contraction, and hunters who want to take a shot at harvesting a hare, seek out locations above 1,200 feet in elevation that have dense woody stem vegetation that’s at least 7 or 8 feet tall and difficult to walk through in a straight path. Regenerating timber stands 10-20 years old, regenerating conifer or spruce stands and wetlands are all good starting points.”

The most recent PGC study of hares, conducted from 2013-16, focused on habitat in Monroe County to determine the relative abundance of snowshoe hares, as well as the types of cover, forest-stand age and forest management history where snowshoes are most abundant. Boyd says that study revealed several findings, including that Pennsylvania hares are larger in size and have higher annual survival rates when compared to northern populations, as well as prefer areas with a high density of woody stem vegetation and conifers.

“Our hares also had shorter and less dense hair, which makes our hares appear to have browner coats even in winter than more northern populations,” Boyd said. “As for concerns about the species, habitat fragmentation, an imbalanced forest age structure in the state’s forestlands, lack of suitable habitat and warmer winters with less snowfall and shorter durations of snow cover are all factors.

“We have a disproportionate amount of forest cover in Pennsylvania that is 80-100 years old. Another way of saying this is that we have a much smaller percentage of early succession forest habitat in Pennsylvania than we did a few decades ago.”

After a decade and a half of pursuing hares, Leggiero hasn’t tired of giving his annual after-Christmas trek a go. He plans to be out there opening day seeing if the pellets from his shotgun might finally connect with a trophy.

If not, he can always look forward to 2021, when he’ll once again enjoy combing the swamps, woods and conifer stands of the Pocono Plateau in search of the “white rabbit.”

“We don’t have very many cottontails in the area,” Leggiero said. “We have some small pockets of Appalachian cottontails, which is actually pretty neat in and of itself, but we don’t get a lot of cottontail up here.

“So, having hares to hunt small game-wise is actually pretty neat.”