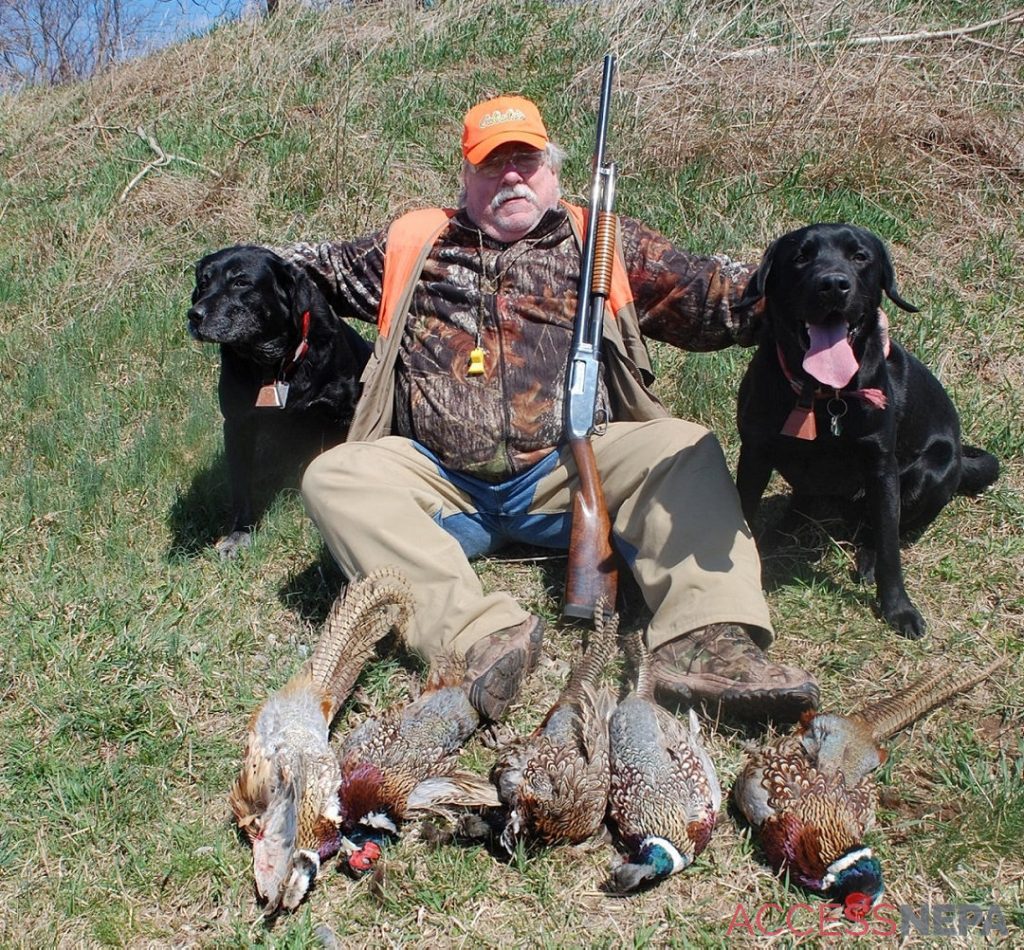 Call it “The Ralphie Syndrome.”

And although it was not a Red Ryder BB gun that was the object of my desire for decades, factors that included bad timing, overpricing and condition had prevented me from pulling the trigger on purchasing a Winchester Model 12 shotgun. When I finally was able to secure my Model 12, little did I know it would lead to one of my most memorable pheasant hunts with my two black Labrador retrievers — then 10-year-old Dingus and his soon-to-be 2-year-old grandson Doc.

Named the “Perfect Repeater” when introduced, the Model 12 set the standard for pump-action shotguns during its 51-year production life from August 1912 until first discontinued by Winchester in May 1964. Other than those that were the tools of the trade for Clyde Barrow, the nearly 2 million Model 12 shotguns that were produced in various grades and barrel lengths found there way into the hands of upland and small game hunters and clay shooters.

Chambered in 20 gauge only when first produced, 12 and 16 gauge versions debuted in 1913 — first listed in the 1914 catalogs — and the 28 gauge came out in 1934. So-called “modern” Model 12 shotguns manufactured after 1927 were chambered for 2¾-inch shotgun shells only, although some specialized models such as the Heavy Duck Gun Model 12 were chambered for 3-inch Super Speed and Super X shells.

Some of the early models have been modified with their chambers lengthened to accept 2¾-inch shotgun shells, while others remain in their factory-stock chamber lengths. Careful inspection is recommended to determine whether or not it is safe to fire a modern 2¾-inch shotgun shell in an older Model 12.

At the time the Model 1912 made its debut, it was the ultimate in pump guns, improving on the Model 1897 with its exposed hammer. Loading the tubular magazine was done through the bottom of the gun, and empty shells ejected to the right.

Depending on the particular wooden plug installed in the magazine, two, three or four shells could be loaded into the tubular magazine, and six 2¾-inch 12 gauge shells, including one in the chamber, could be loaded when no plug is installed, but be advised Pennsylvania Game Commission regulations limit loads to three shells when hunting.

Ironically, it was the high quality of the Model 12 with its forged and machined steel parts that led to its discontinuation in 1964. It had become too expensive to produce at a competitive price, and the Remington Model 1870, which had made its debut in 1950, was much less expensive and soon took over the market.

From 1964 through 2006, special production issues of the Model 12 were produced by Winchester, the U.S. Repeating Arms Company and Miroku for the specialized gun collector purchase programs, but the shotgun was never mass produced after 1964. When the U.S. Repeating Arms Company announced a complete closing of the New Haven, Connecticut, factory facility in January 2006, it brought to an end to the 95-year history of the Model 12.

All of which heightened my inner Ralphie’s desperate desire to make a Model 12 my own, but I managed self control and maintained budget limitations. I couldn’t resist making a bid in an online auction for a Model 12 that had been owned by Barrow, however, my $200 offer had evidently been blown away.

In time thoughts of making an old Model 12 the new gun in my collection faded until a friend gave me some information that pulled me back into Ralphie’s world. He noticed the previous week while shopping at Shakey’s Gun Shop in Orwigsburg that Josh Shamonsky had three Model 12s as part of an estate sale.

Well, maybe it was to be and nothing ventured, nothing gained — so I ventured, and I gained. One Model 12 was the shotgun of my dreams — a 12 gauge with the original finish that showed signs of honest wear.

Josh and I struck a cash deal and before going home with my “new” Model 12 we made a stop to see “Dr. Model 12,” a.k.a. Brian Leibold, who overhauled the shotgun. In addition, he found an original red rubber butt pad and traded it for some fishing tackle.

Once home I went to my Winchester book of serial numbers and was very pleased to learn the shotgun had been manufactured in 1932. Winchester produced 8,855 Model 12 shotguns that year and my No. 655752 indicated it was made late in production.

A few weeks later came the life event that assured my Model 12 will always have a special place in my memory. That day I participated in a charity continental shoot at Martz’s Gap View Preserve, using my Mossberg over-and-under to reach out and touch the high-flying birds.

After lunch I opted to hunt scratch birds that had somehow eluded our crack marksmanship, and out came the Model 12 from its case and Dingus and Doc from their crates. Dingus had been hunting birds since he was 6 months old and was obsessed with flushing them, while as for Doc to say he was learning is kind.

As Dingus was sadly aging at an accelerated rate compared to his predecessors Jeb and Coleman, I chose a level area to hunt. Almost immediately he became “birdie,” and a cock bird exploded from the cover to my left.

Out of reflex, I swung on that bird and folded it with a load of No. 6 shot. As good as it was to down that bird with my first shot from that Model 12, it got better when Dingus recovered and retrieved to hand.

It turned out that was the last time Dingus had it in him to hunt, but it ranks as perhaps our best together. He now curls up in his bed and watches with approval when Doc gets loaded in the truck.

It was obvious to me this hunt was my reward for those years of wanting an old Model 12 as my new gun. And, I never came close to putting my eye out.