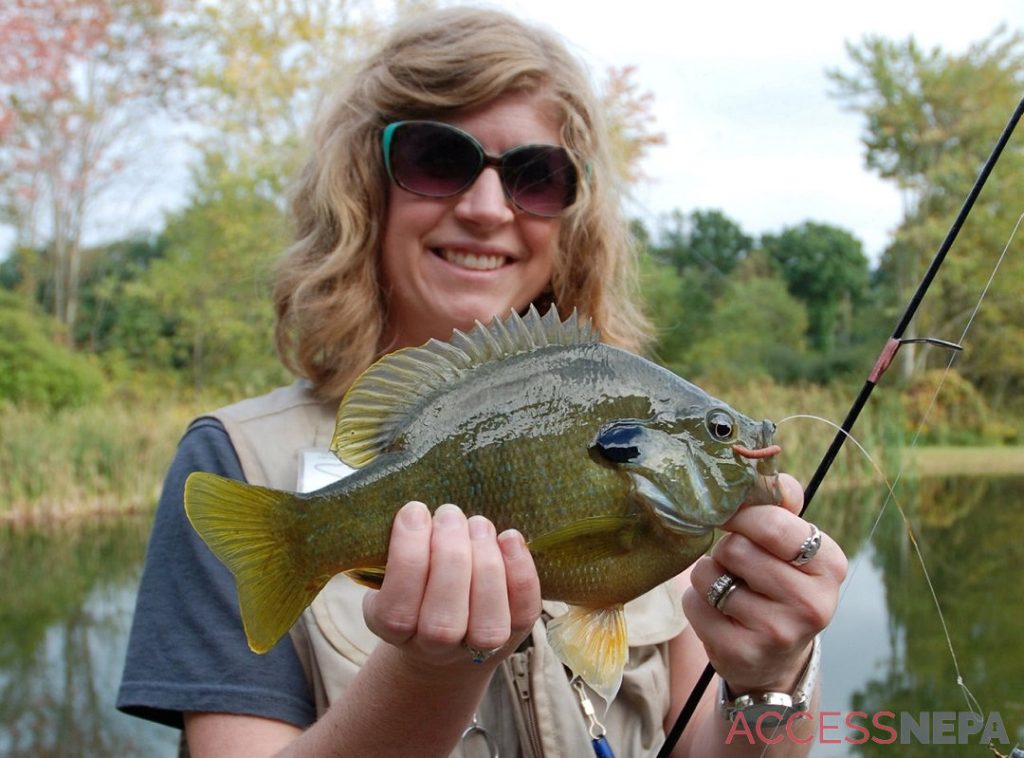 Now is the time for busting feisty springtime bluegills

Bluegills are perhaps one of Pennsylvania’s most overlooked game fishes, however, their eagerness to feed and aggressive, combative nature when hooked make them a prime species to target during the springtime.

With a year-round open season, no minimum size requirement and a daily limit of 50 combined species in Commonwealth Inland Waters, bluegills and other panfish comprise the most liberal subgroup of fish managed by the Pennsylvania Fish and Boat Commission. Bluegills are known to overpopulate their habitat, which can lead to smaller and slower-growing fish.

Therefore, it’s important to harvest a select few each year prior to the spawn so populations can remain in balance with available aquatic habitat. Fortunately, they taste great breaded and fried in a cast iron skillet, so here’s a primer on busting feisty springtime bluegills.

Where: Bluegills are a predominantly shallow, warm-water species. They can be found frequenting weedy shorelines of small lakes and ponds as well as quiet, gravelly areas in slow moving streams. They tend to feed and take cover near aquatic vegetation or submerged structures such as dock supports, logs, rocks and even underwater bridge pylons.

Focus on shallow flats ranging in depth from 2-10 feet of water, such as large coves or slowly tapering shelves transitioning to a steep dropoff. Bigger fish tend to hang in the deeper water but will cruise onto these soft, shallow flats to feed. A small, portable depth finder is perfect for locating these key transition areas, even from a canoe or kayak, and it takes a lot of guesswork out of locating their preferred underwater topography.

When: Late May through early June is the easiest time to catch bluegills. Water temps reach the upper 60s, prompting the onset of a lengthy spawning period. This timeframe is generally marked by territorial defense strikes by males guarding their nests, and they’ll repeatedly hit just about anything someone throws at them.

A month or two prior to this, they aren’t quite as frisky, but they are still busy packing on the calories to prepare for the spawn. Primarily daytime feeders, it’s best to pursue bluegills during the first few hours of daylight while they are still hungry from taking refuge in their weedy coverts all night.

As soon as the sun comes up, the fish become voracious feeders, offering an ideal window of opportunity for anglers hoping to catch multiple fish in just a few short hours. They will also feed again in the evening before returning to cover, but not quite as heavily as the morning feed.

How: Since bluegills are social fish, there are usually several to be found wherever one is found. Take advantage of their aggressive schooling behaviors in these shallow feed zones by presenting bait as quickly as possible for repeated hookups.

Because they have relatively small mouths, hook sizes 8-12 work best, as do jigs and lures on the smaller side. Try using a clear fluorocarbon line in 6-pound test on a lightweight spinning rod for a fight worthy of storytelling.

Depending on water conditions, preferred food sources and weather, bluegills will feed at varying depths in the water column. It is all a matter of finding the right match for any given day and keeping a diverse arsenal in your tackle box can help accomplish that.

Dropping a bit of crawler, grub or mealworm to the bottom by attaching a short leader to the hook, running it to a swivel and adding a split shot near the swivel can be a solid strategy. One can easily alter this setup by suspending the whole rig below a bobber at the current holding depth of the fish. Small twisters can be jigged at varying depths, too, and they work well either bounced along the bottom or twitched in short pulses through the water’s midsection.

When bluegills are skirting the surface to feed, either pushing up minnows or rising to sip aquatic insects, small floating crankbaits seem to be the ticket. Cast out and let them float stationary for a few seconds, then, give them a few twitches before reeling back in a slow retrieve.

It seems bluegills are attracted to the first splash, come to check out the lure, and then at the first sign of life (the twitch), will eagerly hit the lure or follow it a short distance before striking. Again, bluegills are very social and aggressive feeders, so after the first hookup, frenzy often ensues, so get the line back into the water as quickly as possible and watch as several other fish vie for the next crack at the “good stuff” probing the water.

For springtime fishing action, bluegills are hard to beat. They are plentiful, fairly easy to catch and put up a good fight.

What’s more, they’re a great-eating fish, built perfectly for the frying pan and the perfect species for young and old of all skill levels to target for a tasty meal.

Frantz is a past president of the Pennsylvania Outdoor Writers Association. Contact the writer: outdoors@republicanherald.com