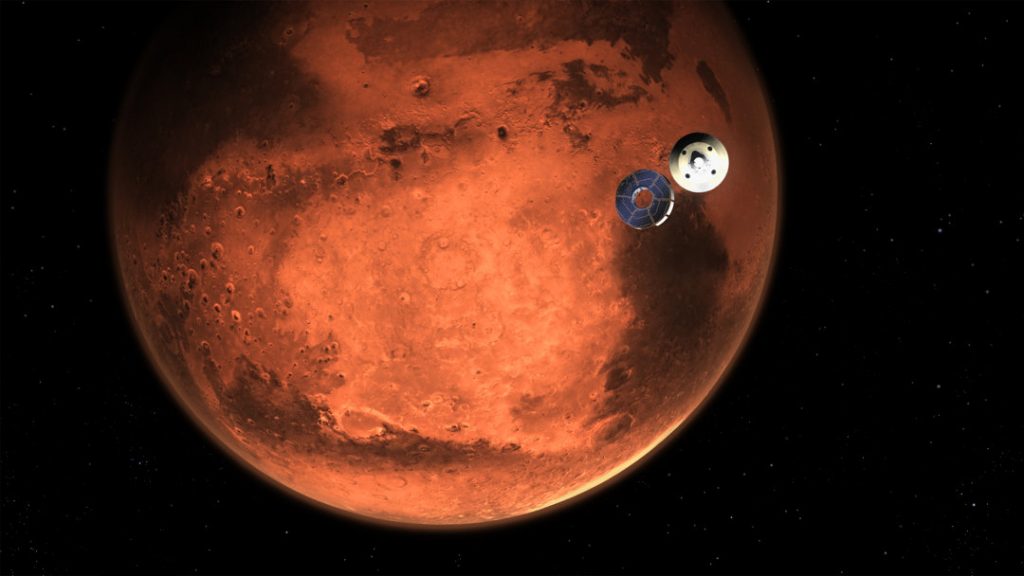 Since late last summer, Mars has been a part of the evening sky. In early October, Mars and Earth passed within 39 million miles of each other while traveling in their individual orbits around the sun, something astronomers call opposition.

Mars was very bright in October, but has faded since then as the red planet is now more than 100 million miles away. Despite that, Mars is still easily found high in the southern Pottsville evening sky. Just look for the brightest star-like object in that part of the sky with a distinctive orange-red hue. If you’re still unsure you’re looking at Mars in the southern sky, the moon will confirm it for you on Wednesday. The moon will be parked just below the red planet in a very lovely conjunction, or as I like to call it, a “celestial hugging.”

Unfortunately, Mars is no longer much of a telescope target because it’s just so far away. Even with a larger scope you’ll only see a reddish dot. However, with a small telescope you can use Mars to find the planet George, currently more than 1.8 billion miles from Earth. Planet George will be the next brightest star-like object you come across below and a little left of Mars. You might see that it has a pale green glow to it. That’s George.

If you’re wondering why you haven’t heard of the planet George, it’s because that was the original name of the planet we now know as Uranus, the seventh planet from the sun. It’s so far away that it takes 84 years to orbit our sun. Uranus is a giant planet, a gaseous globe made of mainly hydrogen, more than 31,000 miles in diameter. For comparison, Mars is only 4,000 miles in girth.

So why was Uranus originally called George? When the famous English astronomer Sir William Herschel discovered his new planet in 1781, he named it after King George III. The name George didn’t sit well with other astronomers worldwide, so George’s official name was changed to Uranus, after the Greek god who was the father of Zeus, the king of the gods. Personally, I kind of like the name George!

Meanwhile, just above and a little to the right of Mars and George is a male sheep, the small but distinctive constellation Aries the Ram. Three moderately bright stars outline what kind of looks like the horn of a ram. The two brightest stars are Hamal and Sheratan. Hamal is a humongous star, more than 14 times the diameter of our own sun and almost 100 times more luminous! Hamal is more than 850 trillion miles or 66 light-years away from Earth. It’s so far away that the light you see from Hamal today left that star back in 1956 when yours truly was born.

Aries is one of the constellations that make up the zodiac, 12 constellations that stretch in a band across the night sky. The zodiac band runs about 8 degrees on either side of the sun’s apparent path among the stars as Earth orbits the sun. Since all of the planets in our solar system, including Earth, orbit the sun in nearly the same mathematical plane, give or take a few degrees, the planets in our sky are always found somewhere in the zodiac band at any given time. Such is the case now with Mars and George, or Uranus if you prefer!

Not far away from Mars, Uranus and Aries is an incredibly bright array of stars. These are the great winter constellations and next week I’ll tell you about a really cool way you can navigate your way around them.