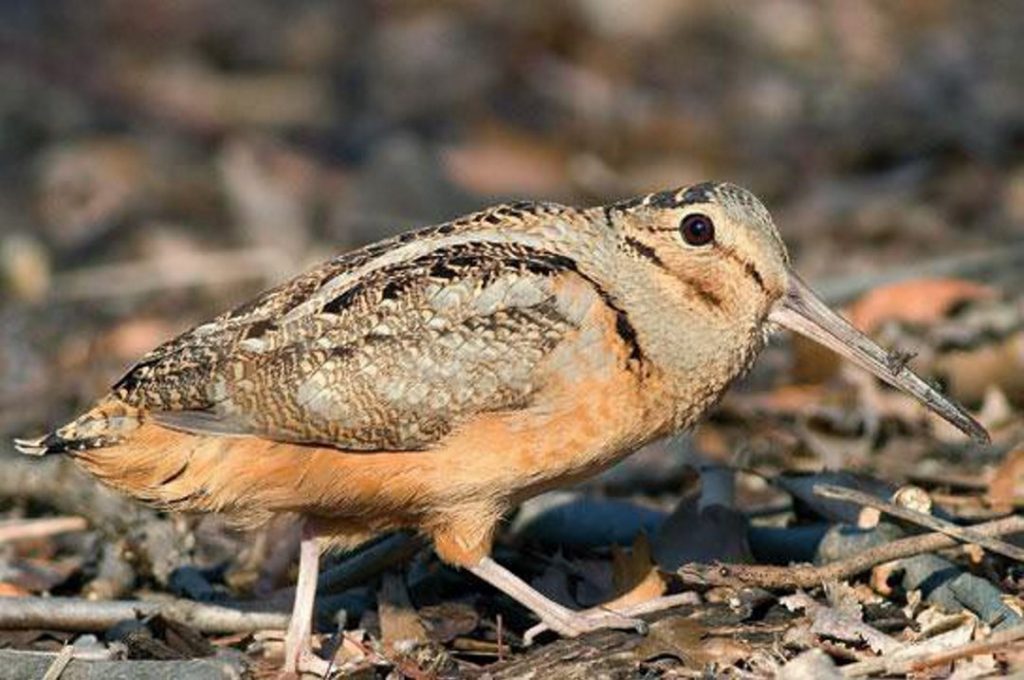 An old Seneca legend claims that after the great Creator made all the birds, he used the leftover parts to create the woodcock. Those who have seen them can understand the meaning behind this belief.

With a short, plump body, big eyes and oversized bill, the bird sure is a strange looking creature. But it provides great hunting opportunities in autumn and a rather unusual spectacle that delights bird watchers in the springtime.

October and March are primetime months for woodcock, also known as a timber doodle, as they migrate through Pennsylvania. Like many migratory species, they may only be hunted in the fall. Though some remain here throughout the year, most spend their winters south of the Carolinas, but by mid-March, the birds are back in town — and they sure can put on a show.

Springtime is best reserved for viewing these interesting birds as they perform their unique courtship displays, during which males first begin vocalizing a “peent” sound in field openings near early successional cover, and then fly upward of 200 to 300 yards on twittering wings, before spiraling back to the ground with a unique warbling song at dawn and dusk. Following the mesmerizing spectacle, smitten females find their suave, swooning mates on the singing grounds.

Endearingly known as the “sky-dance ritual,” these displays take place nearly every evening in woodcock coverts through late-March, making a trip to traditional dancing areas to observe them a worthwhile visit. According to Pennsylvania Game Commission Wildlife notes, hawthorn, alder, aspen, crabapple and dogwood thickets, rife with moist soil and early successional growth, provide the ideal habitat for the American woodcock.

Low-lying, boggy areas are preferred as they harbor a timber doodle’s favorite food source — earthworms, which make up about 60 percent of a woodcock’s diet. An additional 30 percent is insects, crustaceans, millipedes, centipedes and spiders, and about 10 percent comes from plant food – mostly seeds and blackberry.

Like many game species, this fascinating bird has greatly benefitted from habitat restoration efforts provided by those who pursue it. Michael Kotay is an officer for Woodcock Limited of Pennsylvania, a non-profit conservation organization founded in 2007 consisting of hunters and conservationists interested in the wellbeing and viability of the species.

“My brother Tom and I took a stand on not shooting a full limit of woodcock (three birds) since we started hunting them 45 years ago, so it was only natural to get involved,” Kotay said. “We’ve always had such great fun hunting them with dogs and wanted to do what we could to ensure woodcock hunting opportunities in the future.

“There are loads of woodcock habitat areas, but some are lost each year due to development. Several years ago, we partnered with the Ruffed Grouse Society’s South Mountain Chapter to improve and create additional habitat in Swatara State Park – probably the biggest woodcock stronghold in our home area.”

The project Kotay referenced is now 10 years old, and birds are thriving there as a result. In spring of 2011, the two groups performed much-needed habitat work in the state p[ark, planting 10,000 Aspen seedlings in an effort to create new woodcock habitat on two abandoned strip mine sites.

“As I see things, research is the greatest need for the betterment of the American woodcock, along with managing quality habitat,” Kotay said.

Woodcock Limited, as well as the Quittapahilla Audubon Society, assisted the PGC’s Eric Miller on a research study of the species in 2009. His work took place in Swatara State Park, Fort Indiantown Gap and the Middle Creek Wildlife Management Area, studying the overall effects of invasive vegetation on woodcock nesting and brood rearing habitat.

“We netted, banded and gathered information on each bird we captured in Swatara State Park — 36 in all,” Kotay said. “We also located about 13 nests with pointing dogs and monitored them throughout the incubation process and monitored the travels of the hens, which were fitted with radio telemetry units.”

The study ultimately found that woodcock will utilize freshly cleared tracts of invasive cover as singing grounds, but prefer to nest in higher, dryer locations, ideally surrounded by the protective cover of native shrubs, black locust, aspen, regenerating farmland and orchards, and particularly thick stands of goldenrod. This goes to show that removing invasives and preserving early successional growth is just as essential to the American woodcock as it is to other native species.

Frantz is board chairman of the Pennsylvania Outdoor Writers Association. Contact the writer: outdoors@republicanherald.com