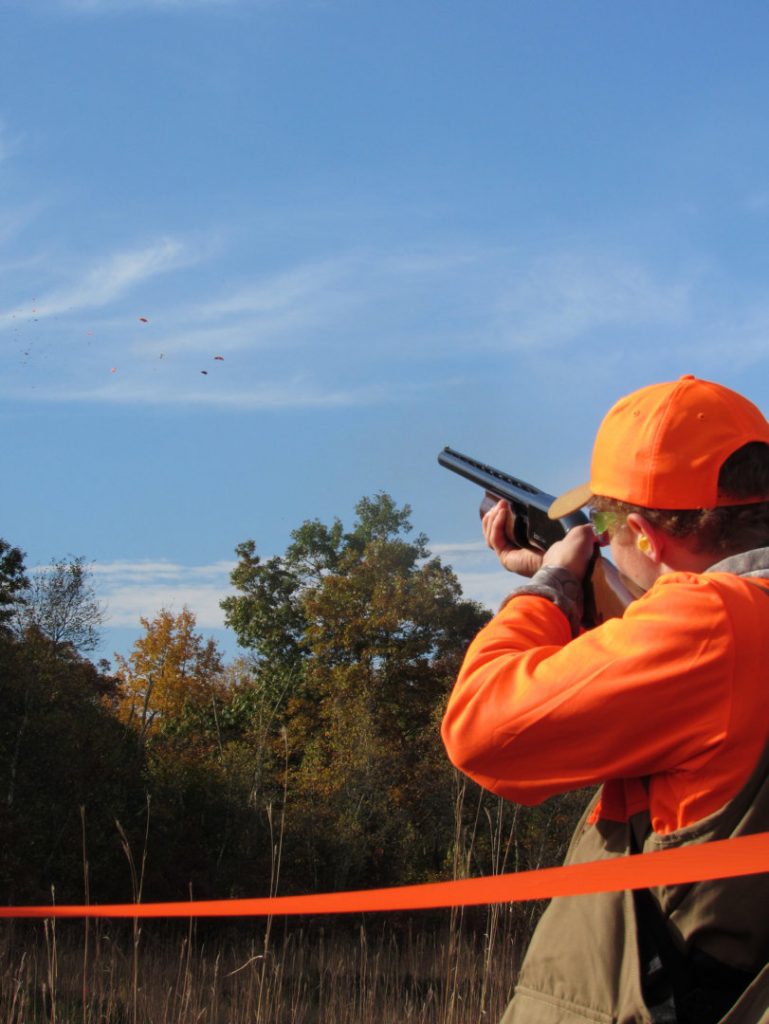 The bright orange clay target quickly made its way up and out over the old hayfield and seemed to level off in the thermals just as the widening load of 9 shot from a 12 gauge broke the target into countless pieces.

Whether it be a few people getting together to shoot a box of clay targets (also known as clay birds) from a hand thrower on an old farm, or accepting an invitation to a sporting club shoot, or traveling to a sporting clay range — the number of people involved in clay- target shooting in the area is growing.

“The number of people involved in sporting clay shooting has been gradually increasing over the last number of years. But since we were able to re-open this past May after being closed due to the pandemic, the number of new shooters, or first-time sporting-clay shooters coming to us has doubled,” said Susan Koneski who owns Rock Mountain Sporting Clays, near Springville, with her husband, Mike.

It seems that there are different reasons for the increase in interest in clay-target shooting. One of them is to prepare for upcoming hunting seasons.

As Pennsylvania features an ample amount of small game, upland-bird hunting and waterfowl hunting opportunities throughout the fall and early winter, getting some wingshooting practice in either at an old farm field or at the range will likely improve accuracy and shooting success during an upcoming hunt.

“My dad took my brother and I out to a friend’s farm field to get some clay bird shooting practice in back in October to get ready for a youth pheasant hunt that we were going on,” said Derek Dietz, 15, of Fairmont Twp. “Just like going to practices helps when playing sports, shooting clay birds before going hunting will help with the hunt that you are going on.”

“Clay bird shooting is not only a great way for young hunters and all hunters to get ready for an upcoming hunt and to work on their skills and to improve eye-hand coordination, it is also a good opportunity for the entire family to enjoy and outdoor activity together,” said Walt Dietz of Fairmont Twp.

Another reason why clay shooting has increased in popularity is that it has emerged as a COVID-safe outdoor activity as it takes place outside and there is plenty of space between everyone involved and it is something that the entire family could be involved with and at any time of the year.

“There has definitely been an increase in families who enjoy the outdoors coming to be involved in shooting sporting clays, and in many instances, multi-generational families — especially young adults and teenagers,” Koneski explained. “Younger shooters do very well as they seem to have excellent reflexes and a great ability to focus and the capability to also not worry about the last shot or the next shot — just the shot at hand; something that could be applied to many other situations in life.”

Sporting clays are known to be the closest to actual field shooting situations of all the shotgun sports including trap and skeet which are undertaken from specific distances. On a sporting clay course, there are stations and the clay targets achieve different distances, angles, speeds, elevations, and even different target sizes to create a level of uncertainness keeping the shooter ready for anything. The shooter would need to be prepared for this in the same way as if a ring-neck pheasant flushed unexpectedly from a clump of switch grass.

As shooting target clays increases in popularity today, there is every reason to believe that it will be a viable sport for tomorrow.

“One of the great things about clay target shooting is that it is an outdoor sport where people can enjoy the outdoors, take part in the sport at any time of the year, and continue to learn about and develop skills in at any age,” said Derek Dietz.

RICK HYNICK is a member of the Outdoor Writers Association of America and can be reached at wildlife@timesshamrock.com.