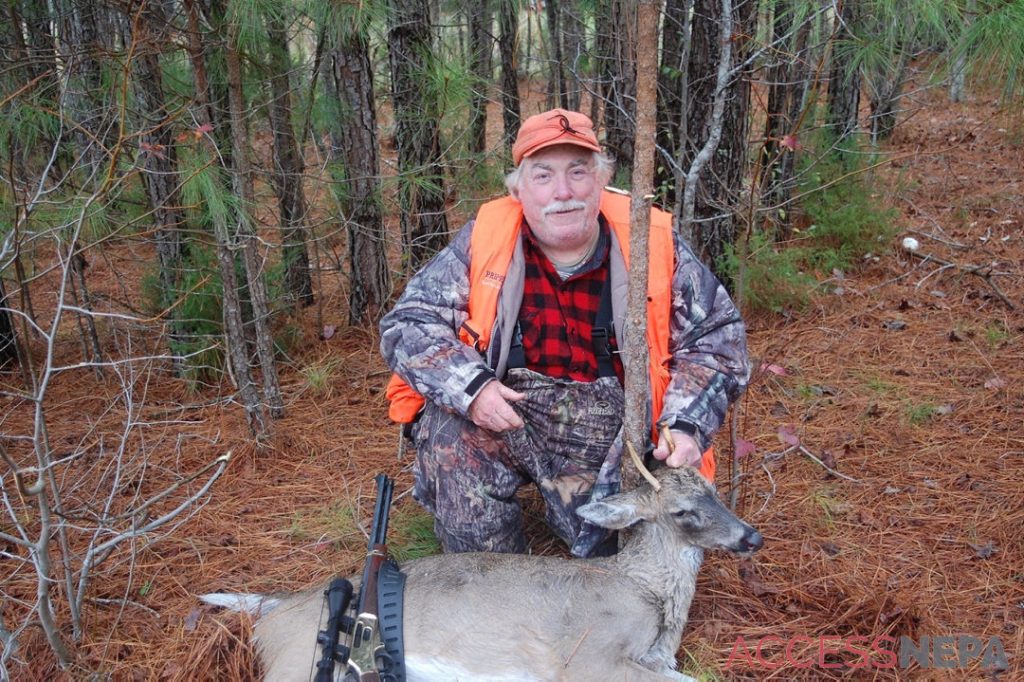 ‘Hunt with a Henry’ proves to be on target

BEAR GRASS, N.C. — A decision made 10 months earlier to “Hunt with a Henry” after visiting the firearms hall to compare various lever-action rifles during the Great American Outdoor Show at the Pennsylvania State Farm Show Complex in Harrisburg was rewarded on the final morning of a three-day rainy mid-December deer hunt in North Carolina with outfitter Mike Briley of Kill Creek Outfitters.

When Henry Repeating Arms made its debut in 1996, founders Louis and Anthony Imperato set out with the goal of manufacturing the finest lever-action rifles available and evidently adopted the corporate motto “Made in America Or Not Made At All” after its initial “Made in America and Priced Right.” A year later, the company headquarters moved from Brooklyn, New York, to Bayonne, New Jersey, and the first shipments of its iconic Classic Lever Action .22 were shipped in and very quickly cornered the market with Cowboy Action Shooters in both the steel- and brass-frame models.

Television infomercials hosted by company president Anthony Imperato, magazine advertising and a slick full-color catalog spread the word, but the biggest selling point was word-of-mouth endorsements from satisfied owners. Taking its name from the first lever-action rifle inventor Benjamin Tyler Henry patented in 1860, it was being used in 1863 by some Union sharpshooter units during the Civil War.

While there is no affiliation to those rifles, in 1996 Imperato secured the trademark to the Henry name and produced models with brass frames reminiscent of the original Henrys and Winchester Model 66, called the “Yellow Boy” by the Lakota and Cheyenne, who most notably used them in 1876 in a battle they called Greasy Grass. In less than 20 years, the Henry .22 had become the rifle for formal and informal target shooting, plinking and squirrel hunting — all the while probably selling more bucket tickets than any other firearm at sportsmen’s banquets. So, it came as no surprise a groundswell developed from hunters who wanted a Henry to hunt big game such as deer, bear and even hogs.

Imperato and his staff heard those requests, thus the slogan “Hunt With A Henry” was born. Meeting those needs was a single-barrel, lever-action rifle with a detachable magazine called the Long Ranger chambered in .308, but it was the lever-action models chambered in .30-30 Winchester, .38-55 Winchester, .35 Remington and .45-70 Gov’t that attracted the most attention.

The smoothness of operation, accuracy and maneuverability in heavy cover encountered in the deer woods moved Henry lever actions to the head of the class. Just as David Allen Coe searched for the words to the perfect country-and-western song, there was one more feature needed to make the perfect hunting rifle, and just like that the Henry Side Gate Lever Action Rifle was born.

“Our Side Gate Lever Action offers up the best of both worlds with our standard removable tube magazine for safe and easy unloading and a side loading gate to keep the magazine topped off. True to Henry form, the Side Gate Lever Action features exquisite attention to detail and a level of craftsmanship rarely seen in other modern firearms, with the hardened brass receiver as reliable as it is handsome with the same yield and tensile strength as steel.

“Brass accents continue through the rifle with the butt plate and barrel band, and the American walnut furniture is set off by intricate, deep checkering that will ensure a firm purchase on the stocks. On the H009B, a semi-buckhorn rear and ivory-bead front sight accompanies a 20-inch octagon blued steel barrel on the handsome brass receiver and delivers the accuracy you’ve come to expect from a Henry.”

Ah, yes, there was a time when those open sights would have been sufficient, but fortunately the receiver is drilled and tapped to mount a scope for those in the seventh decade of deer hunting. Next to deciding on a Henry, mounting a scope was the best decision for hunting deer in the dark pines and briar tangles on many of the prime leases at Kill Creek Outfitters.

In four previous hunts at Kill Creek at least one buck was twice accompanied by a doe on the return trip to Pennsylvania. There is a six-deer limit — buck or doe — in the Eastern Zone of North Carolina, but the sunshine that graced the eight-hour drive south on Interstate 95 turned to rain the first two days of the hunt.

Then, on the final day Briley loaded me on a four-wheeler and drove me on a flooded road to a box blind that had become my good-luck charm. From 2015-18, I took a deer from that stand, my streak ending when I passed on the 2019 season.

Finally, as dawn broke, the rain eased and the ground fog lifted to provide a view to the end of the shooting lane 80 yards away. Throughout the morning, deer movement was detected just inside the woods at the end of the lane, but none presented a shot.

That changed and the “lucky stand” produced on my fifth consecutive hunt in the blind when a large-bodied buck with a broken 3-point rack walked into the lane from the left 50 yards away. Before it had a chance to continue into the right side of the bush, I shouldered the rifle, cocked the hammer, found the deer in the scope and dropped it with a Federal Premium .30-30 round placed behind the shoulder.

Indeed, I had made the right decision to “Hunt With A Henry.”

Information about archery, rifle and muzzleloader deer and bear hunts in North Carolina is available by contacting Mike Briley at Kill Creek Outfitters by calling 252-217-3730, visiting on Facebook or emailing hollywood00000040@gmail.com. Information about Henry firearms is available at henryusa.com.