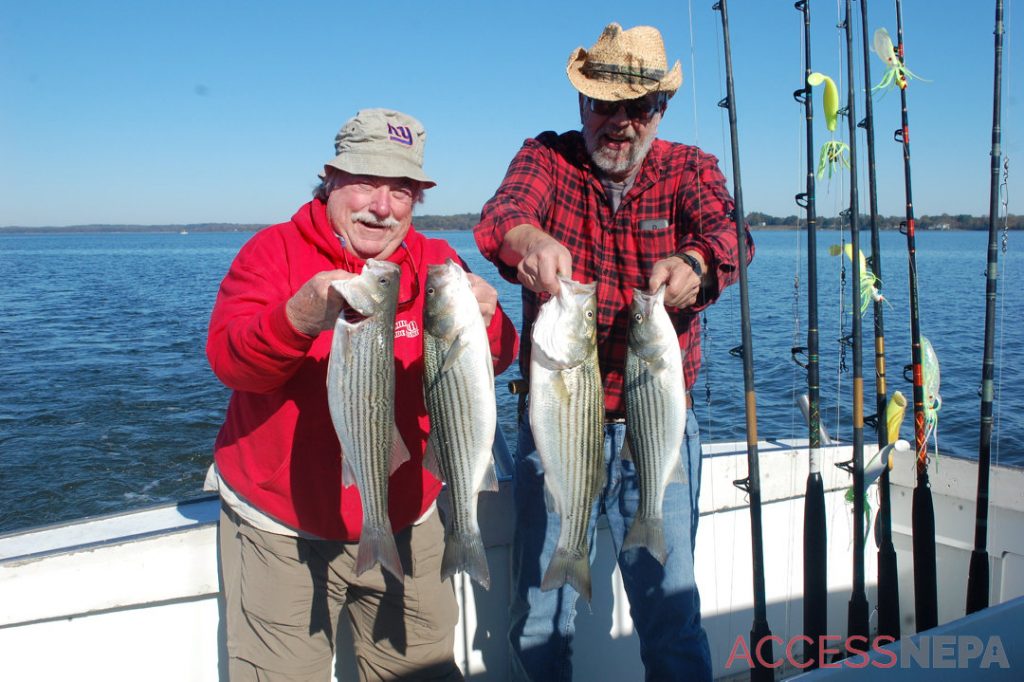 Neither Harry Guyer nor I can remember when we first teamed up for a fishing trip, but he claims to have photos of me when my hair color was still brown.

Over the years, our outdoors-writing assignments have resulted in teaming up on fishing trips that have taken us from lakes in the Quebec wilderness to the Atlantic shore off South Carolina. From the standpoint of guaranteed action and putting some fish in the cooler, far and away our favorite destination is the Chesapeake Bay.

We’ve caught a variety of species — including snakehead, which are delicious when grilled — over the years on Bay outings. What keeps bringing us back is the lure of catching rockfish. That is the name given to striped bass south of the Mason-Dixon Line, and from the way they tug and fight when hooked the nickname is fitting.

Now is the time — to borrow from the title of that popular television series — when “wicked” rockfish begin to arrive in the Chesapeake Bay in size and numbers as they migrate from New England to the warmer winter waters of North Carolina. This migration cycle reverses itself in the spring, so plan to take a break from spring gobbler in May, but for the next month there is no need to wait for the opportunity to catch a rockfish between 30-40 inches.

Rockfish must be a minimum of 19 inches to keep, and Guyer and I knew we were bucking the odds of either actually boating a 40-inch rockfish when booking a charter with Captain Robbie Robinson aboard the 42-foot Miss Regina II, which is licensed for a maximum of six anglers, the first week of November. We felt it was worth the gamble with the peak of the rut approaching in the Pennsylvania archery deer season, followed by bear season and finally firearms deer season.

Besides, Guyer and I have both lucked out in the fall and caught lunkers that apparently wanted to get an early start south and in the spring those that must have been lollygagging on their way north. Well, that didn’t happen this time, but we had some wicked action as Guyer and I combined to catch 13 fish comprised of six undersized throwbacks, two keepers each between 20-23 inches and three legal-size throwbacks that hit when clearing the lines for the return to Beacon Marina. While the limit is one fish per angler, we were each allowed to keep a second fish legally as they were assigned to Robinson and mate Wally Talbert, who no longer captains his own charter boat.

Both Robinson, who is approaching 50 years as a charter captain, and Talbot are lifelong natives of the Solomons Island area. Miss Regina II is docked adjacent to Holiday Inn Solomons, which caters to anglers with bagged breakfast to go and coffee at 6 a.m., with departure from the dock 30 minutes later.

Although we had a bluebird day to fish, the Chesapeake can present challenges during the fall in the form of wind, rain, roller waves or the aftermath of a hurricane the week before. Those reasons — and more — were why Guyer and I chose to fish with Robinson, who specializes in light-tackle fishing on the Pawtuxet River, which provides protection from harsh conditions that can be encountered on the open waters of the bay.

Still, Guyer and I both wanted to give the open bay a go before Robinson powered the Miss Regina II under the Governor Thomas Johnson Memorial Bridge over the lower Pawtuxet that joins Calvert and St. Mary’s counties. With no keepers hitting in the bay, Robinson shouted, “Wally, pull the lines!”

As we powered our way under the bridge and into the mouth of the Pawtuxet, Talbert began setting the rods that were baited with both individual bucktail and 6-inch plastic shad in white and chartreuse and umbrella rigs. These four-arm lures have hooked baits on each arm to replicate a school of bait fish.

Talbert had yet to finish setting the spread of rods when the first fish hit, and the 23-inch rockfish was the first of seven consecutive legal-size fish caught. Less than an hour after entering the Pawtuxet, the four keepers were in the box and the three that hit when clearing the lines were gently unhooked and released.

“I was hoping we would hit one of the monsters, but they probably won’t show up in numbers until the middle of November and the end of the season December 10,” Robinson said. “Still, any time you can catch as many legal-size fish as we did today is a good day, and all of them are really nice fish.”

Best of all, our adventure was relived over a traditional Maryland crab cake dinner. We agreed fighting those rockfish was “wicked” fun.