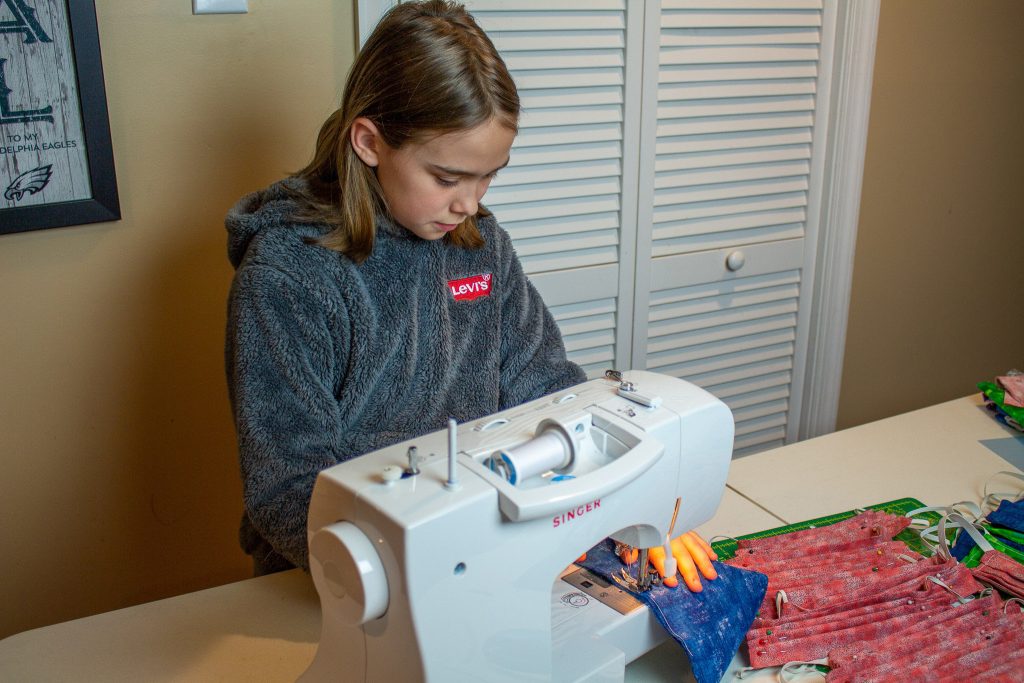 Then and now: Kindness in the influenza epidemic of 1918 and COVID-19

The news reports of 1918 were eerily similar to those of today. Area schools and churches closed. There was a shortage of hospital masks and gowns. Influenza-induced pneumonia afflicted and took the lives of thousands. And the kindness and care of Abington-area residents made a difference then, as it does now, 102 years later.

An estimated 650,000 Americans were lost as a result of the influenza epidemic of 1918. There were approximately 50 million deaths worldwide to what was then known as the “Spanish flu.”

Just months before the virus hit their community in October of 1918, the people of the Abingtons were consumed with agriculture and social news. Abington dairy farmers delivered milk to area cities, township leaders discussed the installation of Lackawanna Trail Road and the alarm on top of the Clarks Summit Borough Building sounded for the first time. Children attended school in country schoolhouses. Church and community events filled social calendars while news of the “Great War” filled newspaper pages.

In 1918, the Abington area was immersed in the war effort. They sold Liberty Bonds, raising $237,400; 287% more than the allotment. Chairman E.D. Morse claimed their efforts were the “most remarkable in the country.”

As influenza reports appeared in Chinchilla, Clarks Summit, Clarks Green, Waverly, Dalton and Glenburn, those communities didn’t stop their acts of kindness and efforts to help others. Members of the Red Cross who lived in the Abingtons knitted socks and hats for children who lost parents.

Nearby Scranton had the third-highest death toll in Pennsylvania from the 1918 flu epidemic with about 1,000 fatalities.

“They ended up with pneumonia that was so severe their entire bodies were turning blue and they couldn’t get enough oxygen,” said Sara Piccini of the Lackawanna County Historical Society. 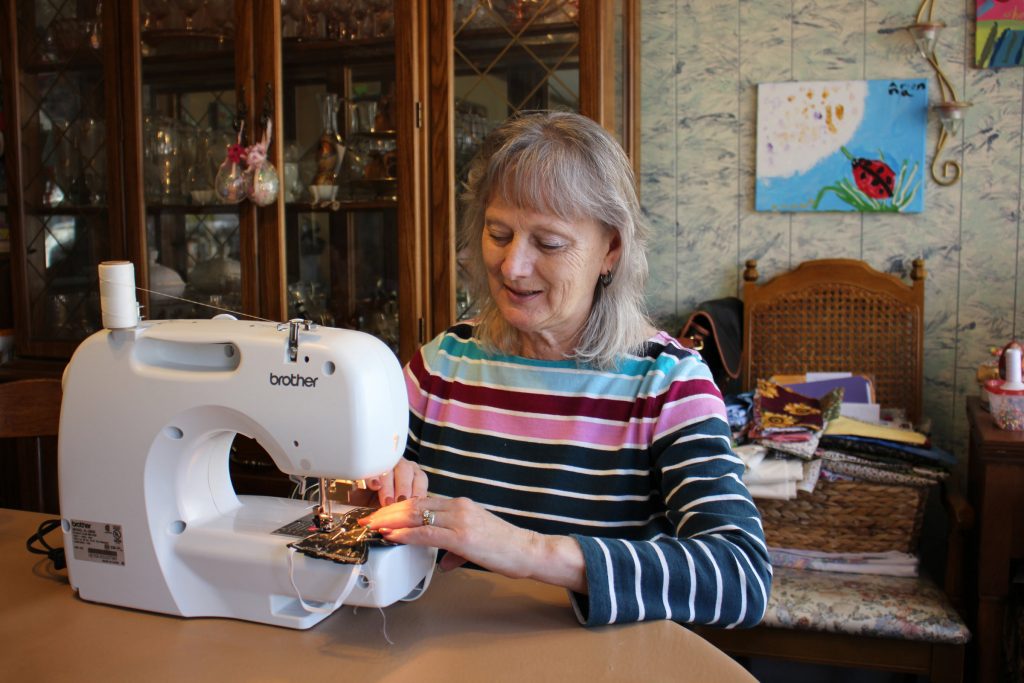 Newspaper reports reveal a delayed reaction to the outbreak. Rural communities continued their social gatherings and went to call on one another, even as nearby Scranton suffered heavy losses in October 1918. The Abingtons’ small towns and rural communities may have believed due to distance from cities that they were protected and immune. As deaths were reported in Clarks Summit, Waverly and Dalton, however, residents faced a new kind of war.

The month of October claimed the lives of Abington residents like Mrs. Patrick Tolley and her three-day-old infant from Chinchilla, 9-year-old Jane Fellows of Glenburn and Anna Mackey of Waverly, the wife of a soldier who was fighting overseas and the daughter-in-law of the town physician, Norman C. Mackey.

A temporary children’s home was set up that year on Wyoming Avenue in Scranton, and volunteers sent clothing and donations. Women in the Abingtons sewed sheets and pillowcases for a temporary hospital located in the Watres Armory in Scranton. Florence Green of Clarks Summit, a young nurse, went to New York City to help the sick. While there, she contracted the virus and died.

As WW I ended, The Red Cross, Junior Red Cross and Ladies’ Aid Society of the Abingtons, shifted their efforts from the soldiers to the sick. Abington members of the Red Cross sewed hospital gowns and masks. They packed supplies for delivery to local hospitals and clinics. 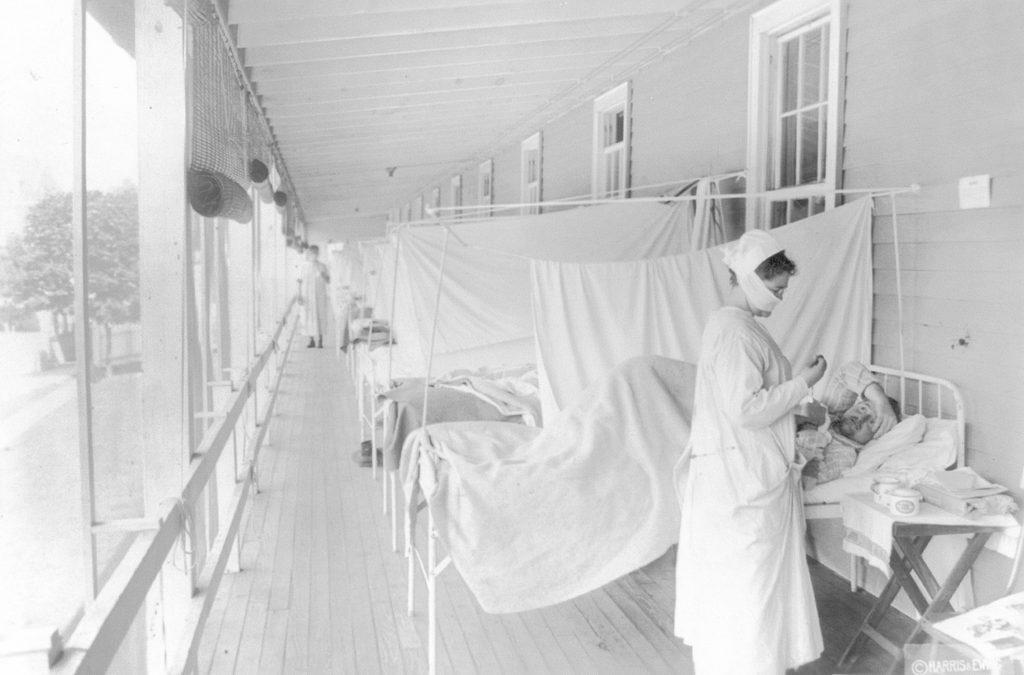 HARRIS & EWING / LIBRARY OF CONGRESS VIA ASSOCIATED PRESS
In this November 1918 photo, a nurse takes the pulse of a patient in the influenza ward of the Walter Reed hospital in Washington. Historians think the pandemic started in Kansas in early 1918, and by winter 1919 the virus had infected a third of the global population and killed at least 50 million people, including 675,000 Americans. Some estimates put the toll as high as 100 million. By comparison, the AIDS virus has claimed 35 million lives over four decades.

More than 100 years later, the Abington area has stepped up again to help others.

In the midst of crisis, volunteers with the Abington Heights School District provide lunches for children, Abington-area restaurants and churches make meals to distribute to those in need. The Waverly Comm, local teachers and the Abington Community Library coordinate stay-at-home activities for children.

Safe in homes, area residents put their talents and time to good use.

Jenica Lodde of Clarks Green recently found herself without work. A crafter by trade, she found a new purpose when she happened across an Open Source COVID-19 Medical Supplies website.

“I wanted to do something like that here,” Lodde said. “I knew there were a lot of crafters in our area who had so much talent and thought maybe I could organize and get people together.”

She launched a Facebook group called “Open Source COVID-19 Medical Supplies — Scranton” on March 15. Within 24 hours, it quickly grew to 100 members. Lodde found the most up-to-date information and instructions for what was needed for masks, face shields and protective gowns. Individuals and businesses donated supplies. Residents all over the Abingtons rallied to make medical supplies and coordinated efforts to deliver to agencies and facilities in need.

“It’s exciting to see so many people jump on board and want to help,” Lodde said. “It isn’t all me. People have been sharing information, donating supplies and giving a great effort. I just wanted a place where everyone could go to find out what was needed. It’s great to have it all in one place and have a resource.”

Lodde shared that many supplies were donated, but they still need foam for face shields. To donate supplies or for more information, visit bit.ly/3au7Ivf. 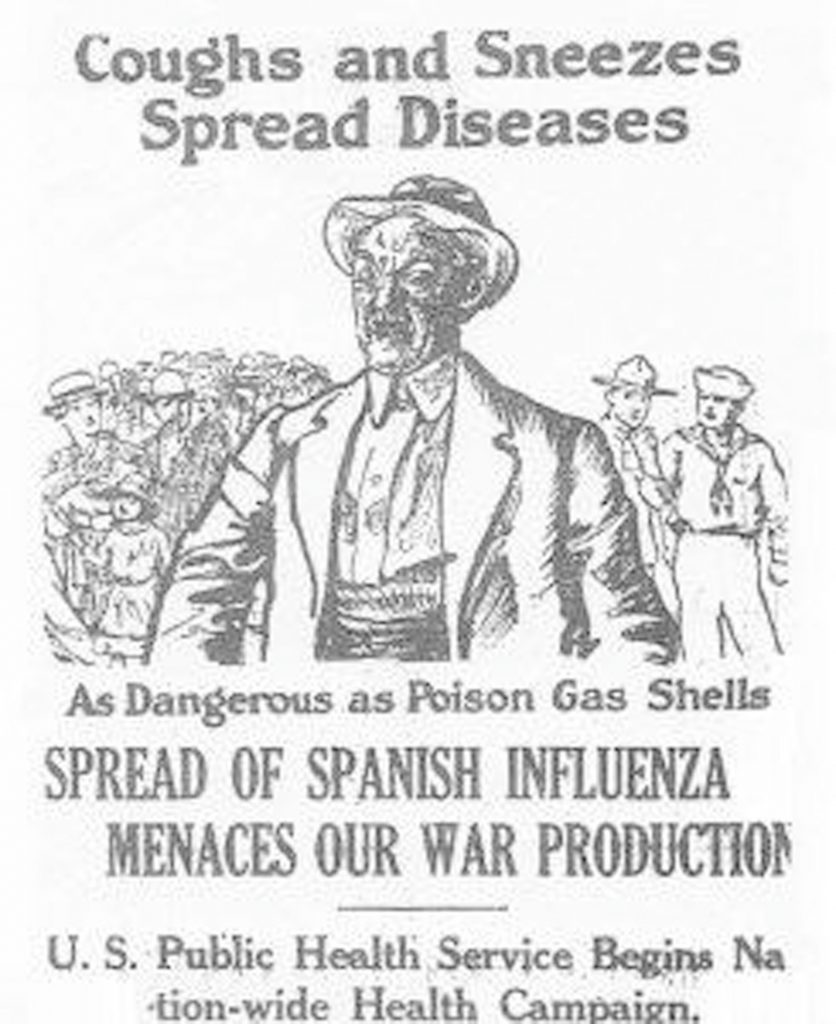 ACCESS NEPA FILE
A notice from 1918 during the Spanish Flu.

The Northern Lackawanna Food Share doubled its efforts and got creative about distribution while social distancing.

Suzanne Green of Benton Twp. said the Food Share, which offers an emergency free food distribution every two weeks to anyone who needs it, coordinated a drive-through food distribution at the Benton Twp. Community Center in Fleetville. Residents are asked to stay in their cars with windows up to minimize exposure. Volunteers load car trunks with groceries provided through the Weinberg Food Bank.

The next food distribution is scheduled for Saturday, April 4 from 2-4 p.m. For more information, visit bit.ly/3avBVtP.

Green stressed the importance of acts of kindness.

“In any way we can, we want to care for those around us,” she said. “It’s all the little things — phone calls, picking up groceries for someone or a care package for a neighbor. Just show that you care. We all need reminders to stay positive and be kind. Small gestures of kindness go a long way.”

A lot has changed since 1918. But a spirit of kindness, generosity and a willingness to help others still reigns in the Abingtons. Here, kindness is more contagious than disease. And the effects are felt through generations.