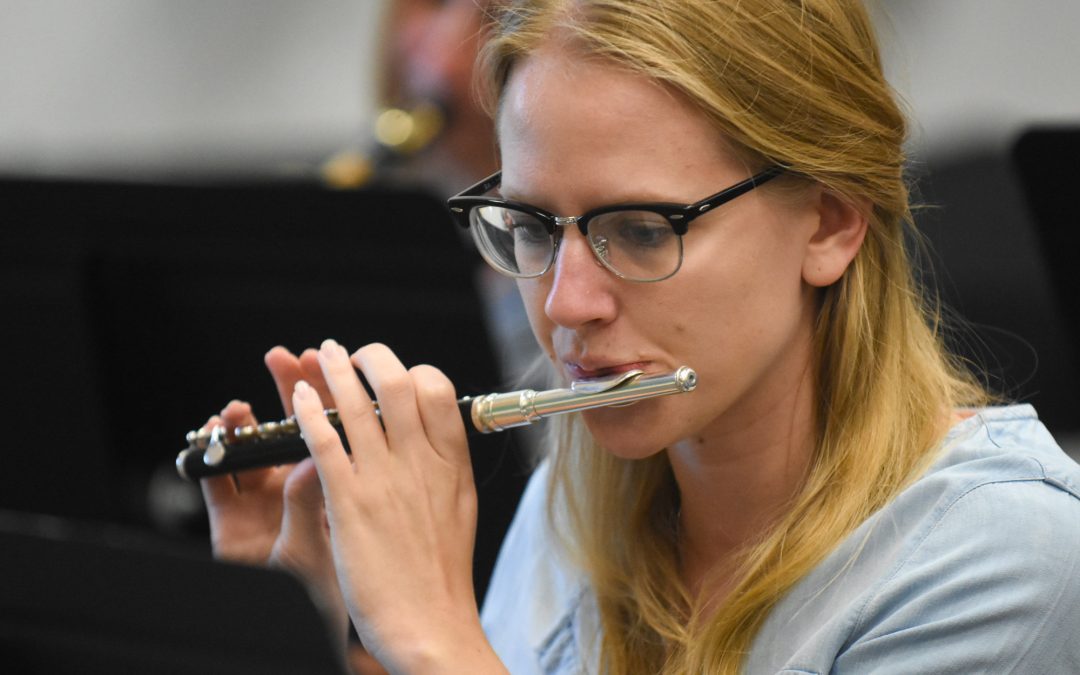 “It is a homecoming” were the words of Shenandoah Valley Alumni Band director Kimberly Brown describing the gathering of band members on Sunday for a special practice.

The band is celebrating 20 years since its creation and its first performance in 1999. The first of three practices was held Sunday in the high school band room. The practice lasted about two hours, beginning with about 30 alumni and ending with 50.

The band is preparing to play at the homecoming football game Sept. 27 between the Blue Devils and the Panther Valley Panthers.

The rehearsal was a reunion and homecoming. The last band gathering was three years ago when it participated in Shenandoah’s sesquicentennial parade in 2016. Everyone who walked into the band room smiled as they saw friends, with many greeting each other with hugs.

The band formed in 1999 to perform at the SV homecoming game. In 2000, the band again performed at the game, after which it was decided to get together in five-year intervals. The last regular band performance in the five-year cycle was 2014, with the borough’s 150th anniversary an exception to the rule after a request was made by Downtown Shenandoah Inc.’s promotions chairwoman Anne Taylor, who is also a SV teacher.

The 20th anniversary also brings about some changes in some positions. Brown is the new director, replacing Ed Tobin, now of Lititz, who founded the band and has been director since the beginning. A Shenandoah native and a resident of Ashland, Brown has played with the band since the start. She is also the director of the Upper Schuylkill Marching Band since 2005.

Band coordinators are Eric James and Shaina Graff. Also participating with the band is the band front composed of alumni. Their coordinators are Sharlaine Shustack, cheerleaders; Kim Major and Tara Davidson, flags/color guard and honor guard; and Norma Barlow, majorettes. The band front groups also practiced outside on Sunday.

“This year has been a reorganization year,” Brown said before the practice began. “It was started 20 years ago by Ed Tobin and was the band coordinator and Danny Kershitsky was the band director. They both stayed with these positions until this year.

“This year John Shoener (SV band director) approached the alumni band committee about performing since it is our 20th anniversary. I don’t think anyone realized how much time had passed. It was at that time, Eddie Tobin said he just wanted to play.”

Brown said William Mallick was unable to continue as percussion coordinator, who is being replaced by James Bayliff and Michael Timko. The band front coordinators have remained the same.

“A lot of people say they haven’t picked up their horn in 20 years. Well, the people who are still playing with us now said the same thing 20 years ago,” Brown said. “And when they came to play, they found out it was just like riding a bike and have been playing with us for the past 20 years. If they don’t have an instrument, we can more than likely get them one. If you’ve graduated, you can come in as alumni. We would like to come by at least our last rehearsal.” 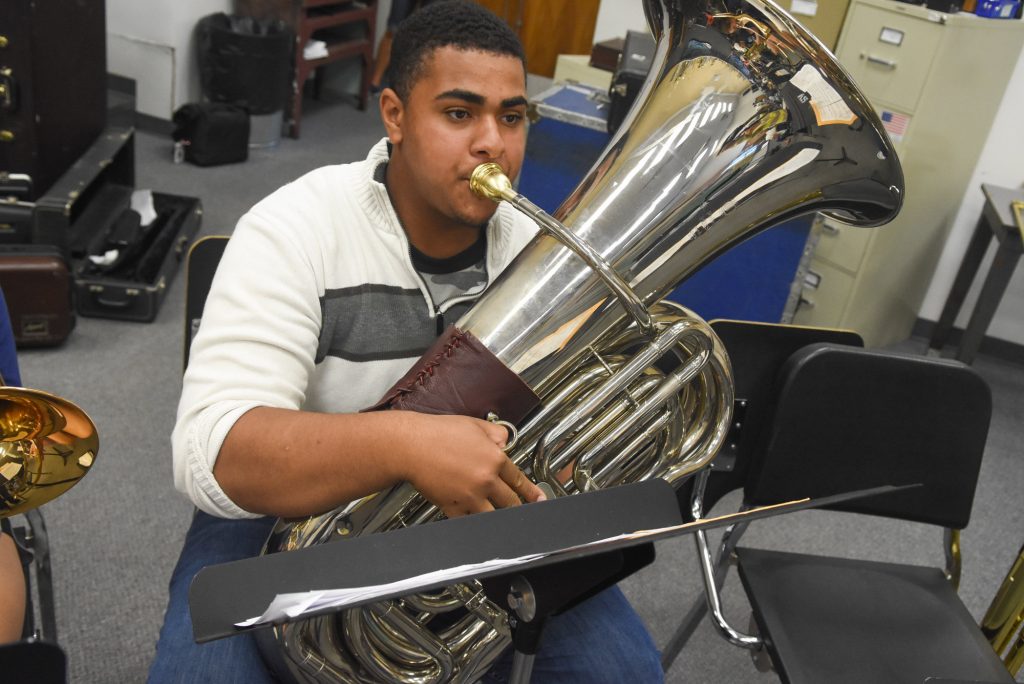 Since Brown has been a member for the 20 years of the band’s existence, she explained that the band was formed with alumni who had been out of school for 20 to 25 years, starting with about 70 members. The newer members graduated in more recent years.

“What’s happened over time is that the 1970s members are the core, so what I would like to do to reach all the people in between,” Brown said. “We have more people who graduated within the last three or four years, but there is still that gap between the 1980s and 1990s that I would like to bridge.”

Brown began the rehearsal with several songs. Even with it being a first practice, the band sounded as though it did not have a three-year hiatus. Since giving up his coordinator position, Tobin sat with the other musicians playing a trombone. He said there was a reason why the band sounded so good.

“It’s the reality of it. We’ve been playing these songs for 20 years. If we don’t know them by now, we’re in trouble,” Tobin said with a laugh during a practice break.

Tobin had the idea of an alumni band for years when he was playing in the Upper Schuylkill band. After talking with Upper Schuylkill member Shelly Dudash Caputo, she also agreed it was a good idea and began working with him.

Tobin was referring to the late Edward J. McDermott, who was professor of music at Shenandoah Valley for 38 years.

“I thought that if I’m going to do a tribute to him, it’s got to be now,” he said. “So we did it, and the turnout was unbelievable. I never forgot lining up in front of the Cooper (J.W. Cooper High School building) and going down to Washington Street and making the turn onto Main Street and there would be four or five deep on for the parade starting the football season. I loved that feeling.”

The band got together again in 2000, but as Tobin explained it, “It got to the point where I was saying that we shouldn’t overdo this, so we planned to do it every five years. You do it for the people.”

James and Graff are taking care of the different needs for the band, with James doing the computer tasks to create a band database with contact information and also getting the word out on social media to members and the public. Graff is connecting with band alumni who are involved and who make like to be, taking merchandise orders and soliciting donations.

“I want to do this because I like band,” said Graff, Lost Creek, and a 2012 graduate. “I was super involved in high school, and in every other alumni band event I was super into it. I just wanted to get more involved and help out. I know they wanted to reach out to the younger generation to start helping, and I’m glad to step in with that.”

James, a native of Shenandoah Heights and Allentown resident, said, “We needed a better way to track our members and alumni. We have a pretty big age gap between those from the 1970s and 1980s to the newer generation from 2010 and onward. Those are the two major components of this band. We’re finally setting up a database that includes email and phone so we can send messages. We’re using Facebook to get the word out about future events so people can get their schedules arranged in a better way.”

The next two practices are at noon to 2 p.m. Sept. 15 and 22 at the football field. Former SV band members interested in participating are welcome. For more information, contact Brown at 570-205-1660 or email kim.brown@upperschuylkillband.org.