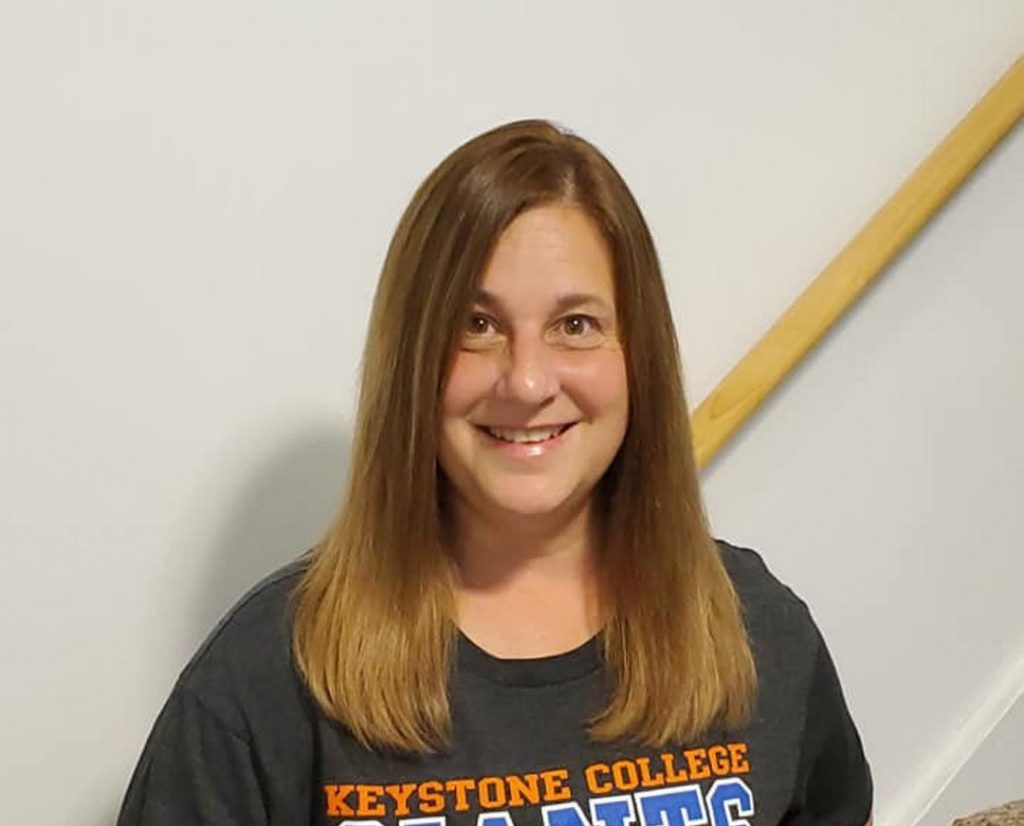 BY MCKENSIE SHINER, THE VALLEY ADVANTAGE

She always dreamed, though, of being a teacher.

The Jermyn woman, who is a part-time student at Keystone College, is close to realizing that dream, thanks to a leap of faith and, more recently, a scholarship from the Pennsylvania Association for Supervision and Curriculum Development.

The Mary Ravita Memorial Scholarship, which Ceccarelli earned in fall 2020, is only awarded to one Pennsylvania resident each year. After Ceccarelli applied for the scholarship in April this year, she didn’t heard back for months. She assumed someone else won it, so she was surprised when she received an email telling her she’d received it.

“When I saw it, I didn’t believe it. I did start crying, but I didn’t tell anybody,” she said. “I thought if I told somebody, it would go away.”

This is the first time a Keystone student won the scholarship, according to the college. And it’s an amazing accomplishment for Ceccarelli, who overcame many challenges to earn her master’s degree in education.

She first received a bachelor of fine arts degree in photography in 1992 from Marywood University. Ceccarelli knew she wanted to return to school to get her master’s degree in art education, but the timing was never quite right.

She was offered an assistantship at Kean University in New Jersey in 1998, which would have paid for Ceccarelli’s master’s degree. But at the time, she was juggling interviews, a job and was expecting her first child. Ceccarelli ended up declining the assistantship and instead continued to work part-time at JCPenney’s photography studio.

“I can’t just bring the baby to class,” she said.

Ceccarelli became a single mother when her sons, Cody and Tanner, were 8 months and 22 months old. She continued working as a photographer and waited until her children were old enough for elementary school before trying to get another assistantship at Marywood University. After being declined a second chance, she began losing hope.

“I thought, obviously nobody wants me to have this,” she said. “It’s not time for me to go back to college to do what I’m trying to do.”

In the meantime, Ceccarelli opened her own successful photography business in 2011, Angela Ceccarelli Photography. The studio is located in Eynon. While her business flourished, she still longed to become a teacher.

When Tanner graduated from the Career Technology Center of Lackawanna County in 2018, where Cody had graduated two years prior, Ceccarelli decided to upend her life and spend a year substitute teaching there to make sure it was something she still wanted to do. She began in August 2018 and ended up accepting a full-time position there as a paraprofessional, where she assists students who have an Individualized Education Plan. The job is a perfect fit because her father raised her to be familiar with heavy equipment and power tools.

“At CTC, some of the kids are running saws or using all different kinds of tools,” she said. “Whether it’s a circular saw or Sawzall, I use those types of equipment and can show them how to use them properly.”

With her love of teaching stronger than ever, Ceccarelli enrolled at Keystone College in 2019 to earn her accelerated art education certificate.

“My son Cody always believed in me,” she said. “He always thought I could do whatever I wanted to do.”

“I only did a few classes this semester thinking we would have been completely virtual, and it wouldn’t have been too crazy, but it didn’t matter,” she said. “It was still really hard to do.”

Ceccarelli said various faculty at Keystone College have made this journey much easier for her, though, including one of the first professors she met in the art education program, Heather McElroy, Ph.D.

McElroy noted that Ceccarelli’s wealth of experience as an educator has been a real asset for the busy Jermyn woman.

“She works hard and is a great multi-tasker, coordinating her school life, home life, and work life with great skill,” the professor said. “I don’t think she sees that in herself, but as an outside observer, I recognize her skill in that area. That will prepare her well for teaching.”

Alongside the hurdles she has faced in her career, Ceccarelli also battled cancer in 2016. The challenge allowed her to remain optimistic about her current goals. Ceccarelli plans to finish her already accelerated degree a semester early. Once she completes her final two classes in spring 2021, she will begin student teaching.

Her advice for non-traditional students?

“Just do it, even if you think you can’t,” she said. “I just think, like anything, once you start it, you can finish it. Time management is the key.”