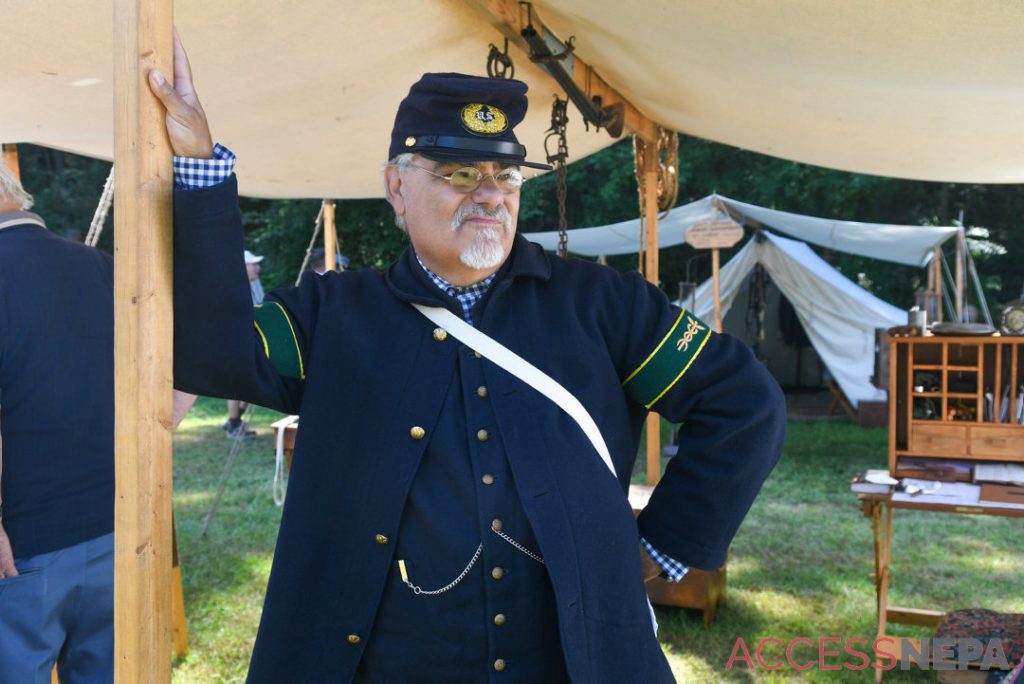 Today he is chaplain to the 24th Connecticut Militia, ministering to the troops on July 3, 1778, following the disastrous Battle of Wyoming. Tomorrow, he will be a member of the 143rd Pennsylvania Volunteer Infantry Regiment, fighting on July 3, 1863 at the Battle of Gettysburg. Let’s join reenactor Mark Kahn in his march through history.

AN: What is reenacting and how did you first get interested in the hobby?

MK: Reenactors are people who wear clothing of a certain historical period and live in character, often donning the persona of a person from history. I became involved in 1985. I was always interested in United States history. My reenacting involvement began with the Civil War period (1861-1865).

AN: Did someone play a role in that interest or was it an outgrowth of your interest in history?

MK: Growing up, I watched “Swamp Fox’’ and “Davy Crockett’’ on the Disney network. There also was a show called “The Great Adventure’’ and it had segments I believe were called “Americans’’ and it covered the Civil War.

AN: What was your first reenactment character?

AN: What reenactment characters have you assumed and the time periods?

At present, I portray a hospital steward in the 5th Corps Field Hospital, Army of the Potomac. I serve as a surgeon’s assistant, pharmacist and administrator.

I enlisted in the 24th Connecticut Militia as a private but I left the unit, later returning to serve as chaplain. I found out that I missed the unit’s camaraderie. The 24th Connecticut Militia was organized on Oct. 17, 1775 by Col. Zebulon Butler. The 109th Field Artillery, Pennsylvania Army National Guard, traces its lineage to the 24th. It is one of only a few military units in the U.S. to carry flags of two states, Connecticut and Pennsylvania.

AN: Do you make your own clothing or do you purchase clothing/armaments/medical surgical kit etc.?

MK: Uniforms for both the Civil War and Revolutionary War are purchased, but they can be handmade. There are “sutlers’’ who specialize in uniforms and historical products such as medical items. These can be very authentic. Visitors to our Civil War encampments are often enthralled by the surgeon’s knives and bone saws. Those interested can find items for sale on historical clothing websites.

AN: Are you a mainstream reenactor or more hard-core/authentic, or both?

MK: I do mostly authentic characterizations in the first person as much as possible. When spectators are about, I always remain in character. 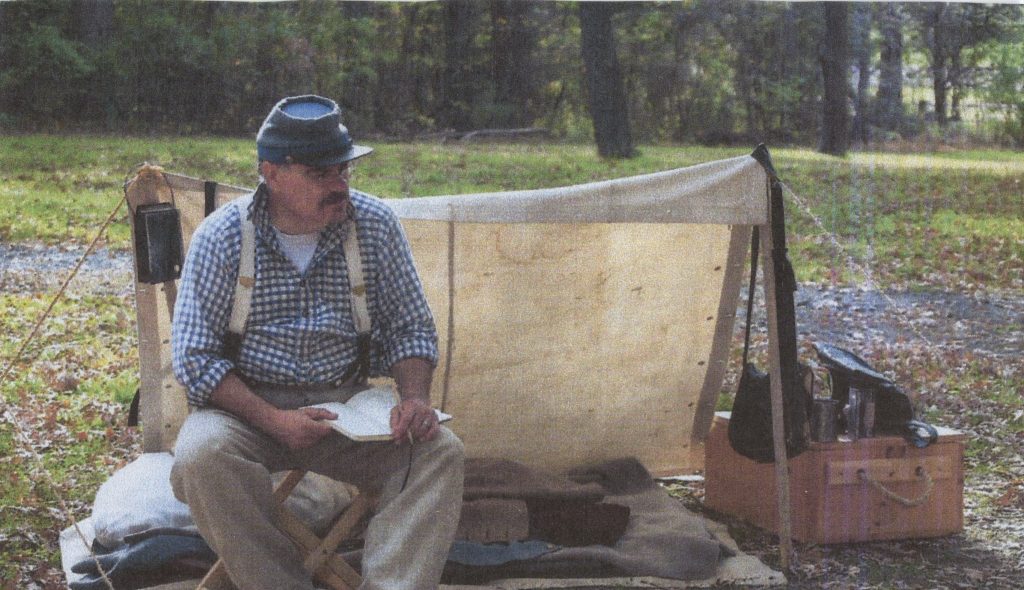 AN: How do you handle meals when doing a reenactment camp out? Do you brew coffee on a campfire or is Taster’s Choice allowed in camp?

MK: Meals are cooked over a campfire using Civil War-era Dutch oven cooking gear. We pretty much do the same meals … stew, soup or chicken. Breakfast usually includes eggs, oatmeal, toast done in a pan … all using period utensils. Coffee is boiled in a large coffee pot. Some folks in camp prefer Taster’s Choice or another instant brand so long as no spectators are about! There is a reenactor saying, “All modern anachronisms are gone when spectators come!’’

AN: Are tents, tent flys, etc. authentic? Are camp items reproductions, original or a mix of both?

MK: All tentage is as accurate to the period as possible, done after periods of the war being reenacted. Camp items generally are purchased.

AN: What would be the typical cost to a young man who becomes a Civil War “soldier” in outfitting himself … uniform, musket, accoutrements?

MK: This is a serious hobby and it can run into some cost. No original items should be taken into the field but can be in camps on display (for all wars). Only repro weapons are allowed on the field. Uniforms can range from $300 to $3,000 and weapons the same range, depending on authenticity. Reenactors are always upgrading and downgrading. New members of a reenactor unit usually have one year to become outfitted. Loaner equipment can be used until the recruit makes sure reenacting is for him or her.

AN: What reenactment organizations are you affiliated with?

AN: Do you recruit new members into any units?

MK: We are always recruiting. We need young men and women to keep this hobby alive.

AN: How has COVID-19 impacted reenactment groups?

MK: (2020) has been a bust for reenactments but some were held with social distancing. Three of us from the 24th CT recently joined with the Daughters of the American Revolution to dedicate a memorial in Hanover Township to a patriot killed by Indians a few weeks after the Battle of Wyoming. All reenactors are looking forward to 2021!

AN: Have you ever taken part in any filmings, such as Civil War movies based on Gettysburg?

MK: I have been an extra in Civil War movies shown on The History Channel. I did voice-overs for historical documentaries (various characters). Some reenactor friends were in the movies “Glory,’’ “Gettysburg’’ and “Gods and Generals.’’

AN: Have you done any public speaking on history/wars/reenacting?

MK: I have done many lectures at schools, libraries and museums. My favorite aspect of the hobby is talking to people about reenacting and history.

AN: What is your favorite period?

AN: Who is your favorite character from U.S. history?

MK: Too many to mention. Remember, all actually lived (during the periods that we reenact).

AN: How extensive is your history reading program?

MK: I have read more than 100 books on the Battle of Gettysburg alone. I am deep into the American Revolution, and I read about World War II and the 1890s.

AN: Do you maintain a closet for your garb?

MK: Yes, and accoutrements are on shelves. 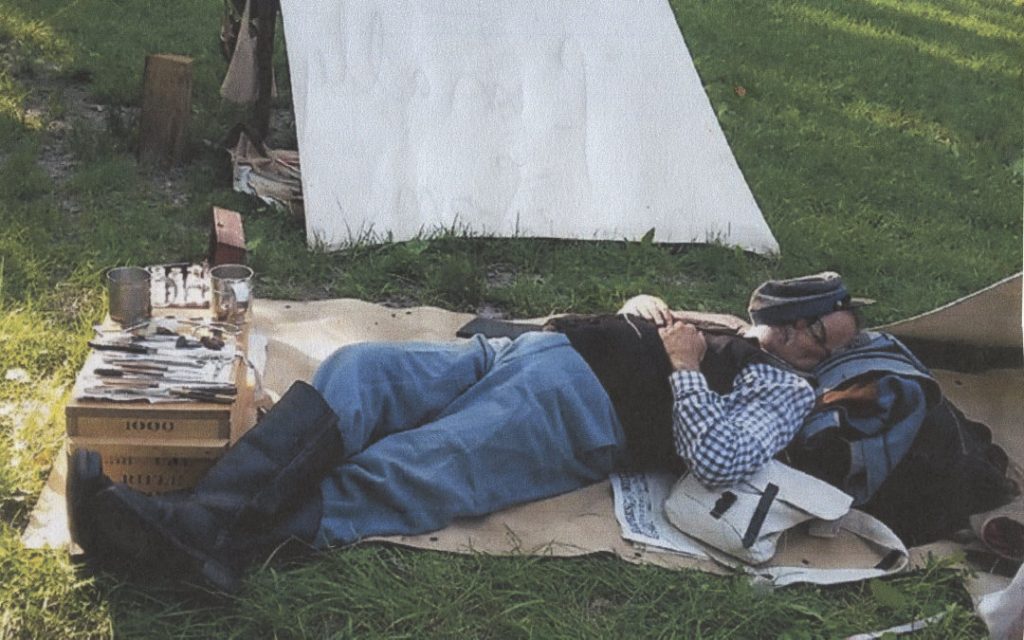 AN: Any new initiatives on the horizon?

MK: Development of the 5th Corps Field Hospital, Army of the Potomac is under way.

AN: Tell us the Mark Kahn story…

MK: I am a native of Brooklyn, N.Y., where I attended Public School 219. After my family moved to Wilkes-Barre, I attended Meyers and Lake-Lehman high schools, and then Luzerne County Community College, King’s and Wilkes. I have a B.A. in education and history.

I taught history and language arts in public and private schools. I enjoy cooking and worked as a cook. I got into acting with area theatre groups, including Showcase, Little Theatre and Music Box. I live in West Wyoming.

Reenacting is an extension of teaching and my co-founder of the 5th Corps Field Hospital and I have a full display. Kids can be very interested in the medical gear and some ask to see an amputation, an interest from which they recoil if shown photos of medical “care’’ of the Civil War era.

Then we can be asked, “Is that a real fire?’’ or “Is that real food?’’ and “Do you sleep in that tent?’’ And those are questions from adults!

For information on joining a reenactor unit, contact MarkKahn07@gmail.com.