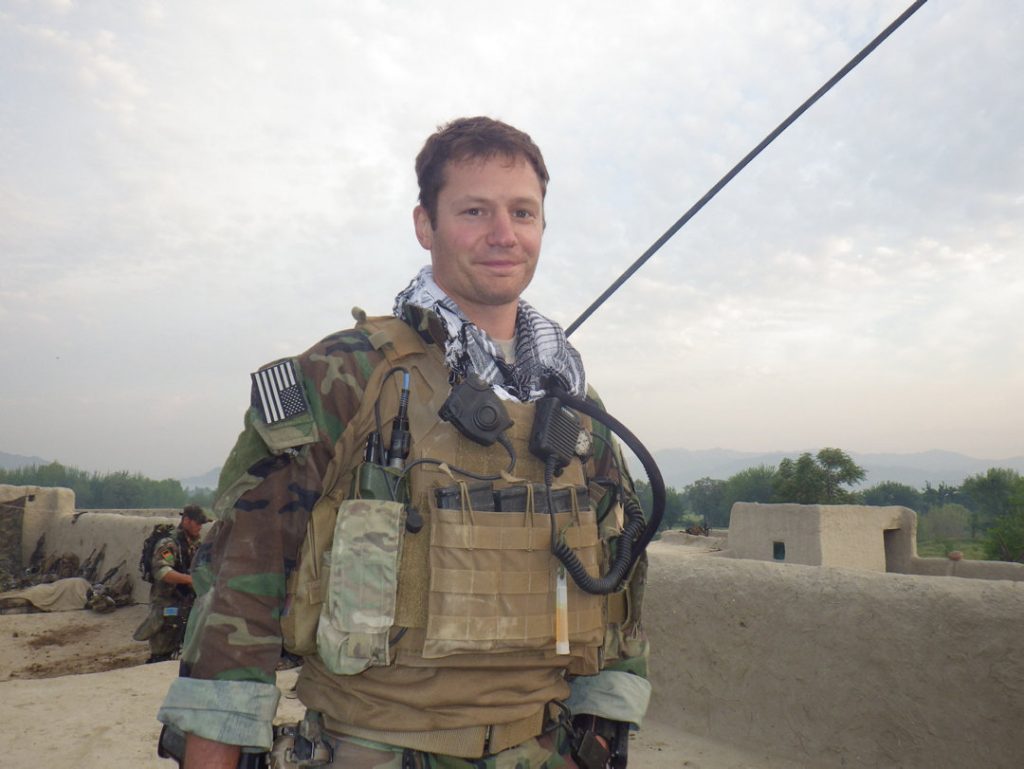 When the Philadelphia Eagles took the field in Sunday’s game, the players were wearing decals honoring two American soldiers who made the ultimate sacrifice in uniform, one of whom was a Schuylkill County native.

The late Capt. Jason B. Jones, a native of Orwigsburg, was commander of the Army Special Forces A-Team and was wounded by small arms fire and died from those wounds on June 2, 2014, near Jalalabad, Afghanistan. He was 29 years old. He was the son of Joseph H. “Jay” Jones and Suzy Jones, and the husband of Dr. Amy Weniger.

Jones, along with the late Army Capt. Robin Towns, a native of Portsmouth, Virginia, were honored by the players with decals about both men on their helmets.

Towns died on Oct. 24, 2007, after his vehicle encountered an improvised explosive device during a patrol in Baija, Iraq. Both Jones and Towns were major fans of the Eagles.

Growing up in Orwigsburg, Jones graduated with honors from Blue Mountain High School in 2003. He was a scholar athlete, earning eight varsity letters. He was nominated for First Team All-American Soccer in the Eastern Region and First Team All-State Soccer in 2002. He was co-captain of the Blue Mountain basketball team for the 2002-03 season, finishing 30-1 and reaching the state quarterfinals.

Jones graduated from West Point Military Academy, sixth in his class in 2007, earning a degree in nuclear engineering. He was captain of his Sandhurst Military Skills Team and earned a Master of the Sword Physical Fitness Award. He was awarded the Bronze Star for his performance during his deployment to Iraq in 2008 to 2009.

The section of state Route 61 is designated the Captain Jason B. Jones Memorial Highway.

Jason’s father was informed about the decal early last week by the Eagles organization.

“Well, a couple of years ago Jason’s wife wrote to the Eagles and mentioned what an avid fan that Jason was,” Jay Jones said. “And then she didn’t hear anything for a couple of years. I don’t know why she wrote that.”

He learned about the honor through a text message last week from Amy.

“We weren’t sure of all that was involved, and then the Eagles issued an article about it and that’s when we got all the details,” Jones said. “It certainly brings back a lot of memories because the family are avid Eagles fans. Jason, when he was still here, and I watched the Eagles together all the time.”

Jones said his son went to West Point, then to Fort Bragg, Rangers school, went to Iraq, got his Special Forces training, but whenever he could, Jason would keep up with the Eagles.

“Wherever he was, if he was able to find a place to watch the game, we would text back and forth during the game,” Jones said. “It brings back a lot of fond memories. He and I rooted together for the Eagles and it gave us some opportunity to communicate that we probably wouldn’t have otherwise.”

Jones added, “It’s difficult under the circumstances, but we’re really thrilled that the Eagles did this. We’re very, very thankful to them for recognizing Jason and the other gentleman. It’s just a great tribute. We’re glad that his affinity for the Eagles and what he did for the country is going to be recognized by the Eagles and broadcast nationwide. It’s a wonderful memorial to a really great soldier who really loved his country and was willing to make the ultimate sacrifice that was necessary.”