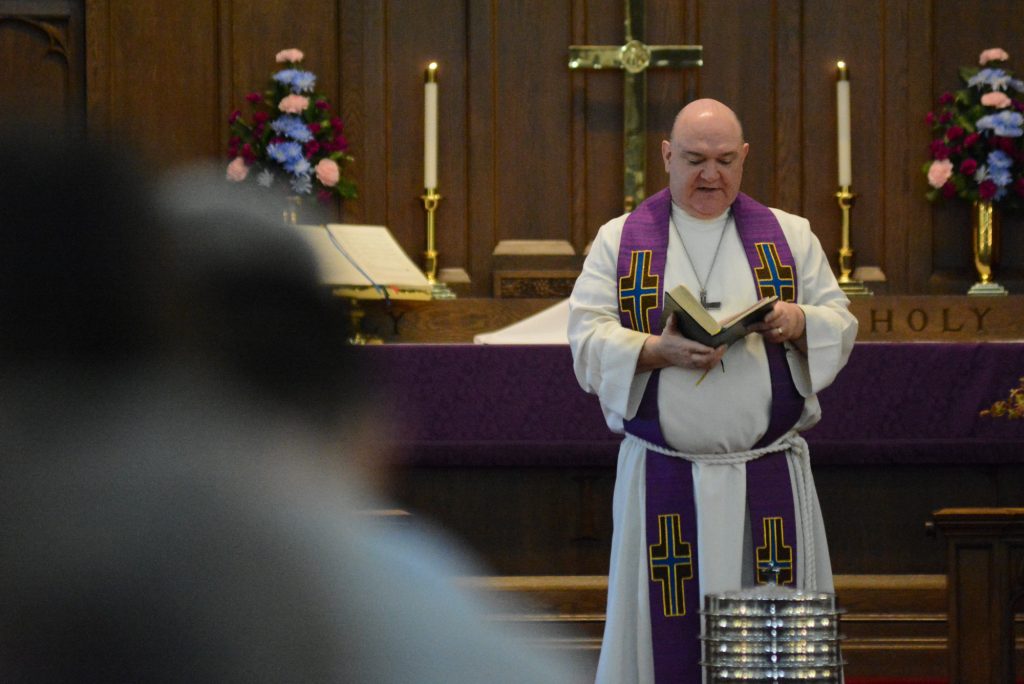 The Rev. Joseph A. “Jay” Serafin marked his 25th anniversary as pastor of the St. John’s Lutheran churches in Ringtown and Brandonville on Sunday, but he said it was not his anniversary alone.

“One thing I want to say is ‘Happy Anniversary,’” Serafin said before he led his congregation in worship at Ringtown. “This is ‘our’ anniversary. On March 1, 1995, we started doing ministry together. We’ve both been doing ministry for a long time. My part in our ministry started 25 years ago, and it has been an amazing 25 years. Thank you for being here to share this, whether you are members of the community, friends, family. People from all over my life are here and I appreciate you are here to share this day. This is our day because we are doing this together and it is our journey.”

Serafin began his 26th year as pastor on Sunday as he prepares to continue his ministry for many more years. The worship service that had about 150 people, was followed by an anniversary celebration in the church hall.

Serafin, 57, grew up in Nescopek and graduated from Berwick High School, Penn State University and Lutheran Theological Seminary in Gettysburg. After his ordination in July 1989, his first assignment was as pastor of Christ’s United Lutheran Church near Gordon from July 1989 to February 1995, after which he was assigned to the Ringtown and Brandonville churches.

Since becoming pastor in 1995, Serafin has conducted the following pastoral acts at both the Ringtown and Brandonville churches:

About a week before Sunday, Serafin said, “I am hoping this day is mostly a celebration of the ministry our two congregations have done over the past 25 years. I simply have been blessed that they have called me to be a part of that ministry. These are amazing people and I want this day, more than anything, to be a celebration of their story. They have welcomed me into this story for 25 years and for that I am grateful.

After the service, everyone moved to the hall under the church to celebrate with a meal. The church provided the main meat dish, with members providing the side dishes. There was a lot of food of all kinds.

The organizers, which included his wife, Jamie Serafin, asked people that in lieu of gifts or cards, they would consider sharing memories. Boxes were placed in both churches to drop of notes or a copy of a photograph so a picture board could be displayed, which it was, along with photos hanging along the length of both sides of the hall.

As people waited to begin eating, Bill Rudolph, a resident of Cove Village near Sheppton, spoke about Serafin. Rudolph and his wife, Judy, moved from Las Vegas back to the area about two years ago.

“I’m a relatively new member,” Rudolph said. “We were looking for a new church when we got back, we stopped in one Sunday. We were welcomed and really liked it here. We’ve been more and more involved ever since.”

Rudolph had many good words about Serafin.

“He’s really great. Over the years we’ve been members of several churches since we move from one area to another, but he is by far my favorite,” he said. “He’s all around great. He does really good sermons. He’s a great leader. Different pastors have strengths and weaknesses. Some are really good preachers. Some are really good leaders. Some are very involved with the community. He’s got it all. He will be greatly missed when he leaves, but hopefully he is going to be here for quite some time.”

Judy Llewellyn, of Ringtown, was a member when Serafin came to the parish.

“He is pretty amazing in his faith,” Llewellyn said. “Whatever he does, you can see his faith shining through it, and it’s nice to have a leader who shows his faith in everything that he does.”