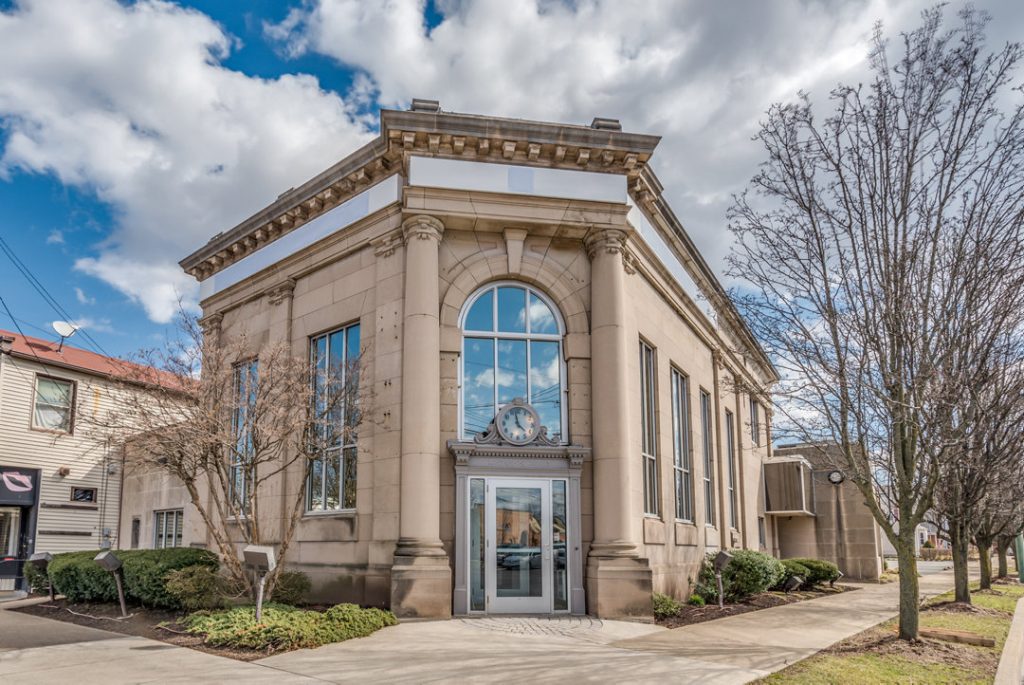 A year ago, Ryan Carpinet and Robert Bresnahan Jr., of Xito Group LLC, bought the 108-year-old First National Bank of Wyoming at Eighth Street and Wyoming Avenue for preservation as well as for leasing as an investment. They want to find a tenant who will preserve the architectural integrity of the building while recognizing the historical significance.

Bresnahan, 30, said, since he and Carpinet, also 30, both grew up nearby and their families and family businesses banked there, they felt a strong connection to the building. With its 30-foot ceilings and ornate plaster moldings and columns in the main lobby, the bank is one of the best examples of period architecture on the West Side.

Two Sue Hand murals complete the historic feel of the interior. The murals were commissioned in 1983. One mural depicts the Eighth Street Bridge, the Swetland Homestead and the Wyoming Monument. It is 6 feet wide by 17 feet long. The other, which measures 6 by 14.5 feet, depicts the old Harry E. Breaker in Swoyersville, which was demolished in 1995.

The first floor features six rooms, a vault with safe deposit boxes and two small rooms where depositors accessed their boxes in privacy. The second floor above the teller area has men’s and ladies’ rooms and a president’s suite with kitchenette and working fireplace.

The original Wyoming bank opened for business in a house owned by the Brace family on March 27, 1907. It was the first bank between Kingston and West Pittston on the West Side. The officers were W. J. Fowler, president; Jesse Schooley, vice president, and G. Edward Dean, cashier. Dean was from Scranton and was affiliated with the Nelson Morris Company in Wyoming. Board members were Fowler and Schooley, James Egan, Charles Townend, C. H. Burgess and W. C. Baldwin.

First day cash deposits were $27,000, the equivalent of $700,000 in 2020 dollars. Within two years, the bank, with 1,500 account holders and deposits of $242,000, moved into the adjacent Shoemaker Block in a space vacated by the Snyder Drug Company. The Brace house was moved on tree trunk rollers down Wyoming Avenue to a site in between Sixth and Seventh streets. The bank served local businesses, saving them a trip to Wilkes-Barre or Pittston. Farmers from West Wyoming, Mt. Zion and Harding also opened accounts.

In January 1911, the bank bought a property near the Eighth Street and Wyoming Avenue corner where the Brace home had been. Then, as now, it is one of the busiest corners on the West Side.

A Remington and Sherman vault built in Philadelphia was installed March 12, 1912, and the new bank opened April 1, 1912.

In the 1970s, construction of an addition doubled the size of the building and drive-thru lanes were added. The bank merged with First Eastern Bank in 1990 and sold to Luzerne Bank in the early 2000s. Carpinet said they closed on the building on New Year’s Eve 2019.

“We would have liked to see another bank go in,” he said.

At least one bank did look at the building, but modern banking doesn’t typically fit with vintage architecture. Luzerne Bank was the last bank business in the building. They closed and moved to a new building on North Main in Pittston.

Though ideas like a restaurant, coffee shop or brewery have been floated, the cost to retrofit the building could be a deterrent. Another hurdle is the COVID-19 pandemic. It’s a tough time for business startups.

“I don’t know if there is a white table type restaurant that would be willing to make the capital investment.” Carpinet said.

Along with the building itself, there is parking for 35 vehicles and high visibility. PennDOT estimates vehicle traffic at 17,000 vehicles a day.

“If nobody wants the building, we’ll keep and preserve its original grandeur,” Carpinet said.

If that happens, Carpinet and Bresnahan are considering all options, one being a small venue space for private events. In any case, Bresnahan said, “We’re happy to have had the opportunity to save this magnificent bank.”

The building is currently being advertised for lease through Lewith & Freeman Real Estate. For information, call 570-243-1814.