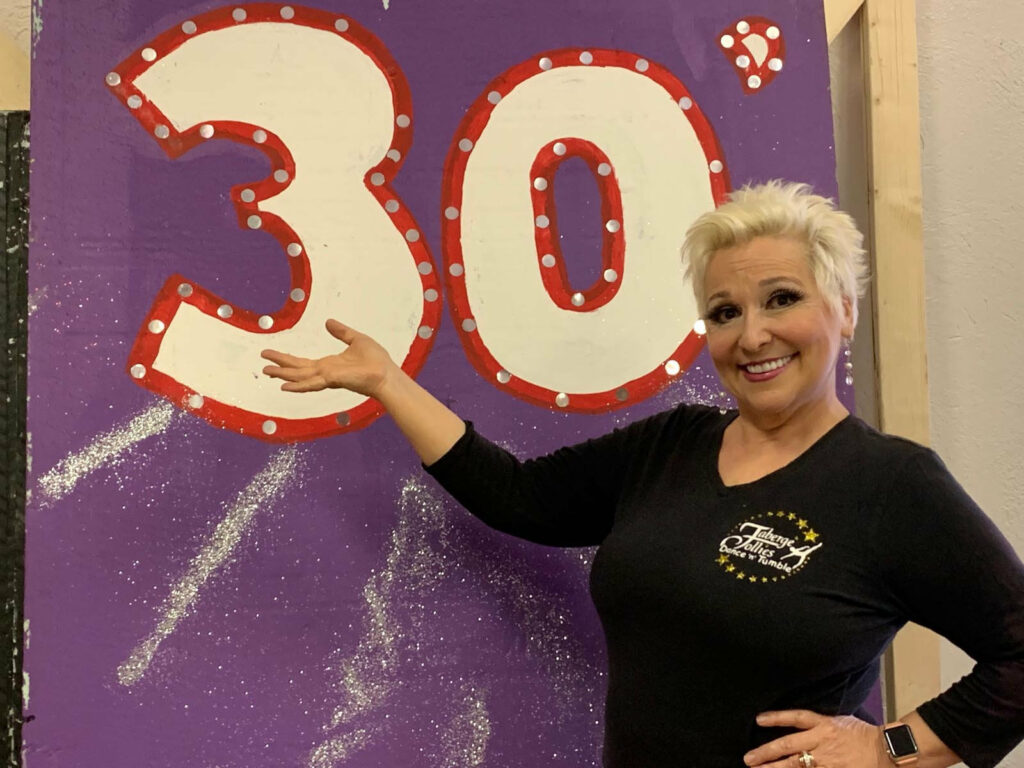 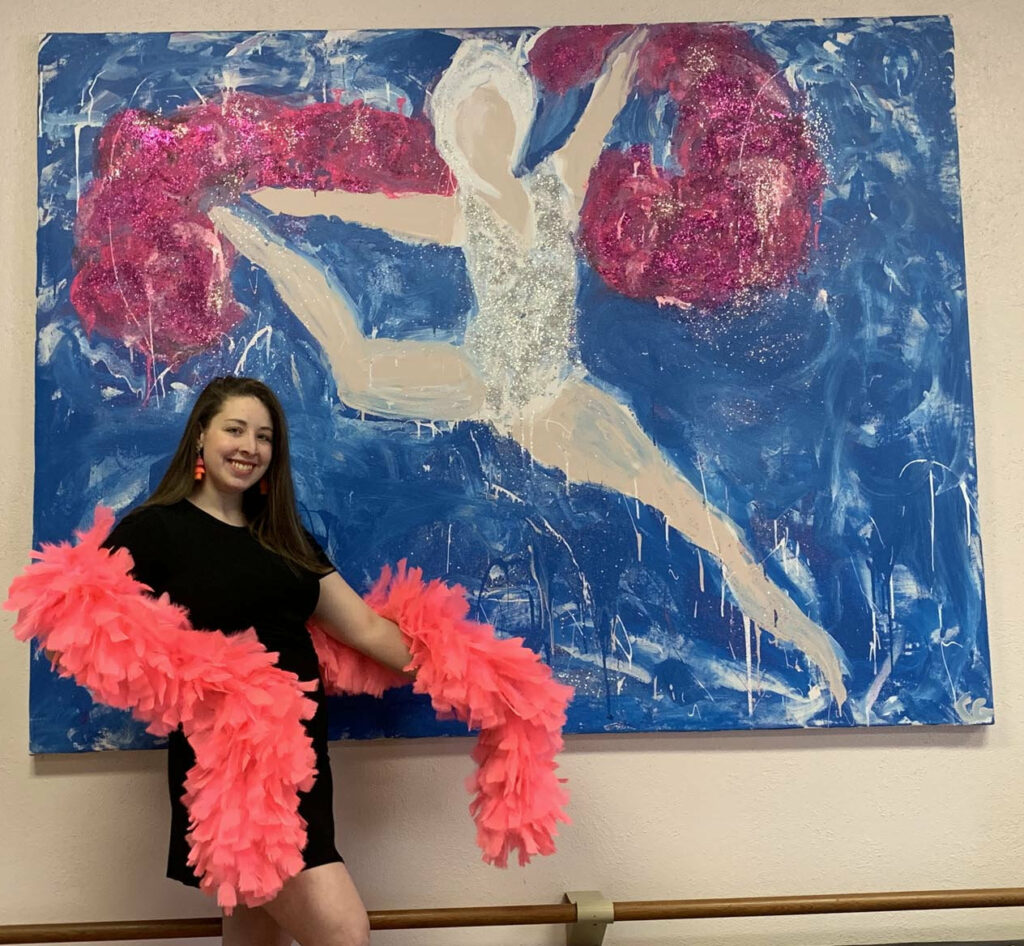 JILL WHALEN / STAFF PHOTO
Brianna Romanchik, West Hazleton, began studying dance with Miss Faberge when she was 4 years old. Now she instructs gymnastics at Faberge Follies Dance n’ Tumble. She is shown here in front of a painting of herself performing.

Miss Faberge was just a toddler when she was leading dance lessons from the front porch of her childhood home.

“I was born to dance,” she smiled. “I’ve forever been a dancer.”

The Zion Grove native and Hazleton resident earned a college degree in marketing, but deep down, it was dancing and performing that made her happiest.

So, when she was offered a job on Capitol Hill — a job that would likely offer opportunities for advancement — she declined.

It was a move, she said, that led her to where she is now — and she couldn’t be any happier.

Miss Faberge is celebrating her 30th year of operating Faberge Follies Dance n’ Tumble. To mark the feat, “Celebration ’19: Thirtieth Anniversary Spectacular” will be held at 6:30 p.m. Friday at the Hazleton Area High School auditorium. Tickets will be available at the door.

The performance will bring together current and former students.

“I have had a joyous life through dance,” Faberge said.

To prepare for the anniversary show, Faberge and her staff have plucked dancers’ costumes from a large wardrobe closet and sprinkled props with extra doses of glitter. Music is ready, and performers are rehearsing their routines.

The show, Faberge said, will be dedicated to longtime instructor Gina DeFluri.

“She is so dedicated to the students. She is the greatest friend a dancer could have,” she said. “I have enjoyed every minute of her. I also learn a lot from her.”

Faberge said the show will be packed with colorful sights, choreographed dances and all types of music.

“Our style is entertainment. It’s all about production and how to be effective on stage,” Faberge said.

And she should know; she’s been doing it for years.

Faberge’s mother, Emma Balko, noticed how her daughter would dance when she’d play honky tonk piano. And so, Balko enrolled her daughter in dance school at a very young age.

She continued to study, and after graduating from King’s College, she accepted a marketing internship at a modern dance studio in Washington, D.C. Faberge studied other forms of dance there, and eventually moved to Miami, where she studied acrobatics, the art of performance and other show business skills under a vaudeville star.

“That’s where I learned the classic show biz performance style — and that’s what I teach,” Faberge said.

She learned how to organize and promote shows, and eventually moved back to the area with her then-partner, Bobby Clements. Soon thereafter, she began Faberge Follies, and eventually located it at the former Moose Lodge, 339 W. Broad St.

In the early years, she and Clements worked together teaching and developing their Broadway-style shows. Clements became friends with the late Rev. Joseph “Father Joe” Ferrara, founder of the Hazleton Philharmonic Society and orchestra. 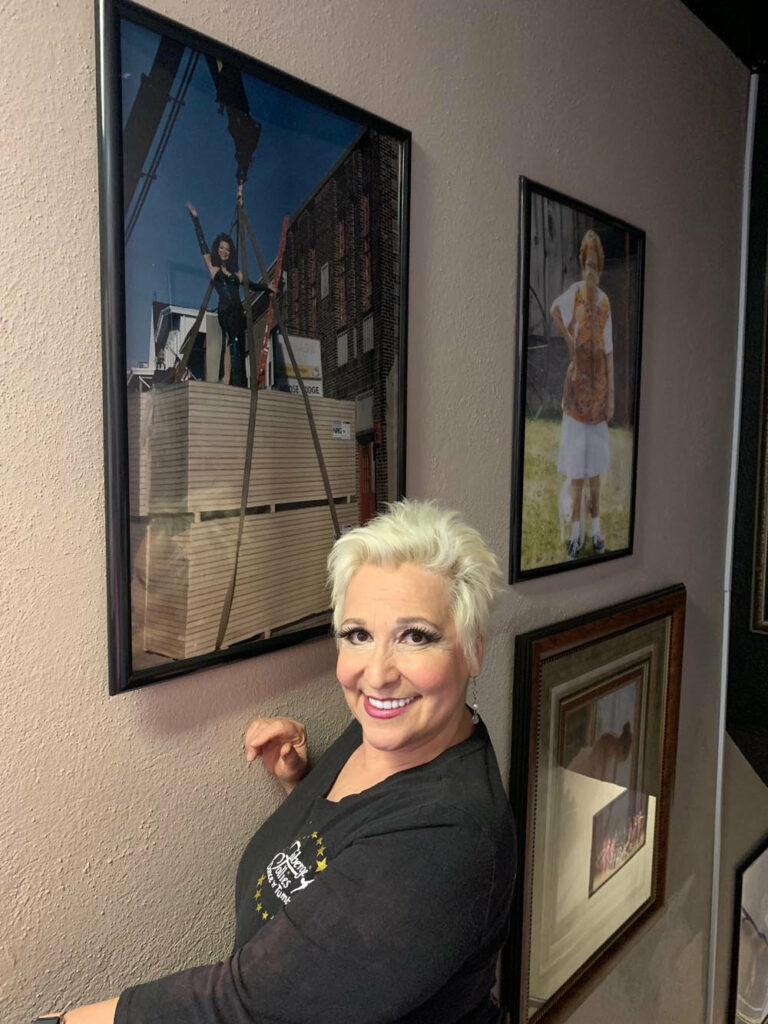 JILL WHALEN / STAFF PHOTO
Miss Faberge stands near a photograph of her when she first bought the Hazleton Moose Lodge on West Broad Street, which is the site of Faberge Follies Dance n’ Tumble. She celebrates the dance school’s 30th anniversary with “Celebration ’19: Thirtieth Anniversary Spectacular” at 6:30 p.m. Friday at the Hazleton Area High School auditorium. A variety of dance and gymnastic styles will be presented.

The relationship with the orchestra continues today, with Faberge’s students dancing in many of its performances.

When Clements passed away in 1998, Faberge was worried that she wouldn’t be able to run her school alone.

“I found out that I blossomed. I realized I could do it myself — and here we are,” she said. “It is a labor of love.”

In recent years, she’s been seeing children of students she taught in the early days.

“They are second generation Faberge girls,” she said.

Students learn all types of dance: ballet, tap, hip hop, acro-gymnastics and more. Students range in age from 2 years to adults. There are also boys’ classes.

Not only does she teach them how to dance, students develop public speaking skills, better manners, elegance and poise.

“That is a Faberge girl,” she said.

At competitions or at public events, she said, she’s often told how well behaved and respectful her students are.

Acro-gymnastics is the school’s specialty. Dr. Larry Skinner helped develop safe tumbling techniques and students must master one skill before learning the next.

Brianna Romanchik, of West Hazleton, began studying under Faberge when she was 4 years old. Now, she is an instructor. Like Faberge, she wants students to hold themselves to a certain standard.

“I am enjoying this more than I ever had. I have such great help around me,” Faberge said.

Faberge’s students have won hundreds of trophies at competitions.

And while it’s an honor, she said what is most important is that her students show good sportsmanship and manners.

She also hopes that her students will respect their elders. That’s why each month, she, her students and others from the community visit a nursing home to sing, dance or even perform magic. The visits are part of the “Make Someone Happy Tour” and are meant to cheer the nursing home guests.

Mary Malone, president of the Greater Hazleton Chamber of Commerce, said Miss Faberge and her students are an asset to the community.

“They have added pizazz to not only the annual Funfest event and parade but also a new element to our revised format of the chamber’s annual meeting since 2016. We wish her continued success, and thank her for being part of our vibrant community,” Malone said.