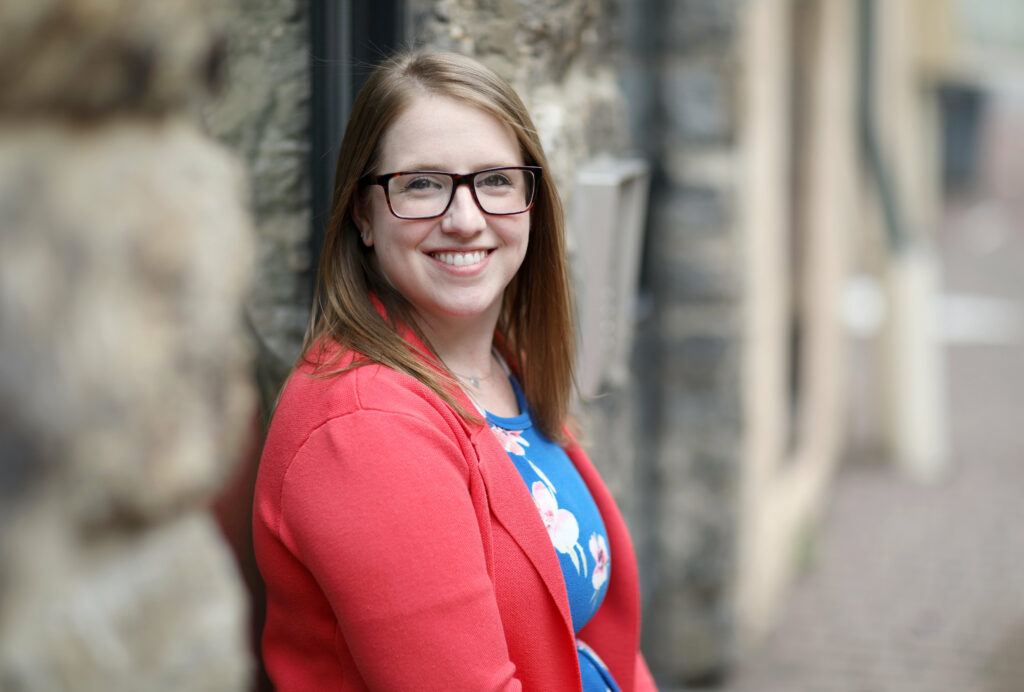 Eynon woman flourishes after her move back to NEPA

Katlin Edmunds dreamed of moving to a big city and leaving her hometown behind.

Once she got her wish and was living and working in Alexandria, Virginia, right outside Washington, D.C., she realized she needed to return to her roots to truly do the most good. When that chance came up in January, Edmunds jumped at it.

“In (the suburbs of Washington, D.C.), it’s a town of transplants. Everyone is there on assignments for three years, four years,” Edmunds said on a recent afternoon. “While everyone is doing amazing things, no one is talking about ways to make the community better. When I would come back to visit and get to that stretch of (Route) 476, it was an overwhelming sense of being home. I needed to move away to appreciate this area more, and I know this is where I am supposed to be.”

The Eynon resident is a strategic business analyst for Command Initiatives Group at Tobyhanna Army Depot, where she has spent her entire career, either in Tobyhanna or Virginia. During her time with the company, she’s had the chance to travel all over the country and see places she never could have dreamed of while growing up in Archbald, including a handful of years living and working in Alexandria and Arlington.

Edmunds loves every aspect of her job, but the most rewarding part is being able to connect with those in the armed forces. She has the chance to meet with soldiers, Marines, airmen and sailors, which puts into perspective the work these individuals do.

“I love what I do because I love to support (the armed forces),” she said, adding how eye-opening it is to see those who fresh out of high school serving their country. “To see firsthand the sacrifice they make and to be able to meet them and talk to them, it’s the best kind of support you can give because they do so much.”

Through her career and in her personal life, Edmunds remains steadfast in giving back. A huge turning point for Edmunds came in 2015, when she was nominated through Tobyhanna to be part of Leadership Lackawanna. She fell in love with the work the organization did as well as the connections she made with other like-minded professionals. Her class created the garden at the Children’s Advocacy Center, an organization Edmunds keeps close to her heart to this day. The experience was eye-opening and helped her to not only realize the amount of nonprofits that exist in the area and how they give back but also to rediscover her home. She’s is in the process of joining the Leadership Lackawanna events planning committee for the 2019-20 term and hopes to continue doing her part to spread positivity and change throughout the region.

“The work they do is just amazing,” she said. “The fact that an organization like that exists, one that helps to bring nonprofits together, that’s doing the most good for the area, and I want to be part of that.”

Edmunds attributes her want to help others to lessons learned from her mother, Mary, during childhood. Edmunds is the oldest of four children — including Michael, Patrick and Brigid — and most of the time growing up, it was just the five of them. Edmunds watched as her mom worked full-time while still holding down things at home and finding time to give back, including to her church, St. Thomas Aquinas in Archbald, where she serves as choir director. As Edmunds got older, she wanted to emulate her mother’s generosity and good heart.

“I am always just in awe of her strength and how she gives and loves,” Edmunds said. “She is such a big part of who I am today. Now, I do what I can to take care of her. It’s the least I can do for everything she’s done for me. If I can be at least half the mother some day (to my own children) as she is to me, I would be happy.”

Her mother’s influence also led her toward another passion: performing. As a musician, the matriarch made sure her children had a creative outlet. Edmunds sang in the choir and attended acting and musical theater camps as a child. She also participated in the musicals at her alma mater, Valley View High School, and with community theater groups including Corner Bistro Dinner Theatre. She took voice lessons from high school up until she moved away and cites her voice teacher, Deb Taylor, as a driving factor in her confidence both on stage and off. An “inspiring person all around,” Taylor helped Edmunds hone her craft, find her voice and see the importance of helping others shine.

Edmunds can see the lessons she learned in the theater — self-esteem, empathy and teamwork — that come through in her adult life.

“I know for a fact that performing on stage and singing in front of people is why I’m able to get up and speak in front of four-star generals,” she said, adding she has plans to begin performing locally again. “It instills such a confidence and self-assuredness in you. You learn how to be fearless in a way. I can definitely trace that back to theater.”

As Edmunds jumps back into living, working and giving back in Northeast Pennsylvania, she’s surrounded by positive influences, including her family and boyfriend, Sean Namlick, who she said inspires her to go after her dreams. She also feels invigorated to see her peers hard at work as well. Whether in nonprofits, the medical field or the arts, she’s inspired by those around her who also want to help their home flourish.

“I love it here, and I’m ready to put down roots,” she said. “This will always be home, and I want to do what I can to make it better.”

At home: Lives in Eynon with her boyfriend, Sean Namlick. Her mother is Mary Edmunds, and she has three siblings, Michael; Patrick and wife, Lexie; and Brigid and husband, Michael. She also has a nephew, Liam.
At work: Strategic business analyst for Command Initiatives Group at Tobyhanna Army Depot
Inspirations: Her mom; her job; music; her family and friends, especially the strong women in her life; and Namlick (“He’s been a strong supporter of me being the strong, independent woman I am,” she said. “I love and cherish his support.”)
Aspirations: To earn a master’s degree from University of Scranton, to close on her house, to start a family and to stay with Tobyhanna
Diversions: Spending time with friends and family, especially her mother, sister, boyfriend and his children, and going to see concerts and musicals
Aversions: Ignorance, racism and intolerance
Quote: “Do not fear mistakes. You will know failure. Continue to reach out.” — Benjamin Franklin