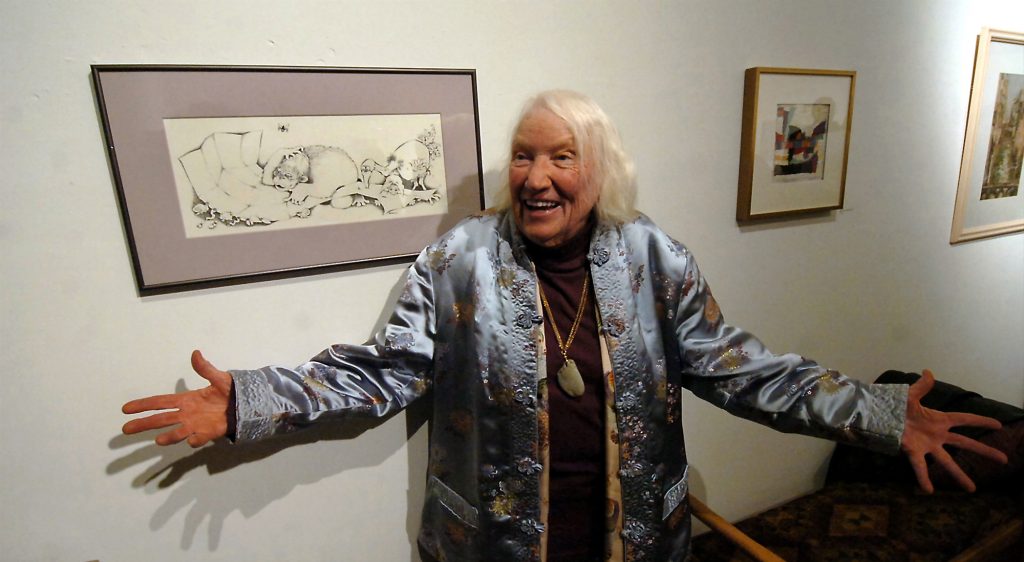 From ‘Lord of the Rings’ to punk rock clubs, artist reflects on well-traveled life

Much like the unique subjects of her drawings, sketches and paintings, Barbara Remington appears at first glance as a fantastical being borne of a character study.

Her silver and white hair falls in soft ringlets just below her ears; her colorfully striped socks slouch defiantly down her thin legs. She moves spryly for a near-nonagenarian and shares unexpected stories of her days frequenting punk rock clubs and hanging around Beat poets such as Allen Ginsberg.

She lives in a remote area of Thompson in Susquehanna County, in a house filled with photos, art and mementos from a well-traveled life. In a small clearing of the woods on her 25 acres, where a colony of feral cats — among other larger species — keeps her company, Remington lives rather independently, as she almost always has done.

“She might be considered an illustrator by some, but she lives and breathes art,” said longtime friend James Penedos, the steward of many of Remington’s notebooks, sketch pads and original artworks at his nearby Springville Schoolhouse Art Studios. “She lives with the bears. She lives in the forest with the critters. She’s a whole Tolkien story. I look at her as a hobbit, but she’s her own hobbit.”

The latter comparison is especially apt, considering what could arguably be called her greatest professional claim to fame: Remington illustrated the original American paperback editions of “The Hobbit” and “The Lord of the Rings” trilogy, which Ballantine Books published in the mid-1960s.

Yet she feels reticent to boast of this achievement, because despite its beauty, her drawings for the book jackets didn’t quite accurately capture the content of the novels since she had no time to read them before meeting the publishing deadline. Still, prints of her illustrations are considered collector’s items, and they have secured her a permanent place in the worldwide fandom for author J.R.R. Tolkien.

Over the years, Remington was a prolific artist, among other ventures, during the decades she lived in New York City, to which she migrated in the late 1950s from Minnesota. As a resident of Northeast Pennsylvania for the last 33 years or so, Remington has shared her work via membership with Scranton’s Artists for Art Gallery and in a 2013 exhibit at Marywood University.

At 89, she doesn’t make much art these days, but AFA, 514 Lackawanna Ave., will display a retrospective collection of her work throughout November, with an opening during the Nov. 2 First Friday Art Walk. And fans also can glimpse some of her original pieces at Penedos’ Susquehanna County studio during his annual open house, which continues today and Monday, Oct. 8, from 10 a.m. to 6 p.m.

During a recent visit to her home, Remington recalled growing up in a family of artists in St. Paul. Born June 23, 1929, she is one of two children of father Heck, who painted landscapes, and mother Pete, a political activist.

Remington grew up among the Midwest’s farmlands with her older brother, Bob, a noted woodworker, but left Minnesota in the early 1950s for Chicago, where she worked for a few years in a bookstore and got a taste for city living. She returned to her home state for a job as a gallery guard at Northrop Auditorium, where the Minneapolis Symphony Orchestra played. There, she met her first husband, timpani player Robert Tweedy, who was friends with her “posse of artists and musicians.”

She followed him to Central City, Colorado, where she lived for years, but married life in the Midwest was not for her. And so Remington moved on to New York during the beatnik and hippie era in the hopes of, she said, finding illustrative work among the city’s many publishing companies. For the next 45 years, Remington made her home on East 17th Street and lived a varied life. She volunteered as a crew member on 70-foot sailboat the Petrel, owned the curiosities and craft store the Boggle Shop for years and occasionally was hired for artistic endeavors, such as decorating a holiday window display for Tiffany & Co. She also went on to illustrate other books, including the cookbook “Cooking from a Country Farmhouse” and the children’s books “Boat,” “The Billy Goats Gruff,” “The Christmas Mouse” and “Really Not Really,” among others.

Remington’s meticulously detailed notebooks recall many of the places and events she documented via her art, from close-up sketches of Ginsberg at the Other End in the winter of 1977 to Simon & Garfunkel rehearsing at the Palladium in 1983, various jury trials and ballet classes in Manhattan in the 1980s and a 1991 trip to watch a total solar eclipse in Mexico.

She married twice more — to the late Ed Preston for about 10 years and then to Brian Brughbinder, the lawyer who handled her divorce from Preston, for 13 years. During a time living at the Diplomat Hotel, poet/musician/Kabbalist Lionel Ziprin took her under his wing, she said, and her relationships, both romantic and platonic, gained her access to an ever-expanding circle of creative types.

Proximity to Max’s Kansas City, a nightclub that drew plenty of celebrities in its heyday, informed many of the sketches found in her notebooks from the time, and she made fast friends with “punk-rock people,” who introduced her to bands such as the Stimulators and the Cro-Mags.

Remington also got to know tightrope-walker Philippe Petit, who famously sky-walked between the World Trade Center’s Twin Towers, and juggler Michael Moschen, a recipient of the MacArthur Foundation’s Genius Grant. All found a home of warm friendship in Remington.

“I think one of her legacies, aside from her artwork, is bringing people together,” said Melanie Urdang, an entertainment agency employee who has known Remington for 30 years. “She inspires all of us to be as creative as possible. She used to be very adventuresome. I feel honored that I know her; I consider her a living legend.”
“She has a great community. The people she surrounds herself with are a strange lot,” Penedos said with a laugh. “It’s a Bohemian life. They broke the mold long ago with Barbara, and with the mold broken, we have a one-of-a-kind, an original, a great piece of work.”

And while age and some health problems have slowed her in recent times, Remington insisted she has more art to make and more adventures to take. 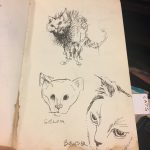 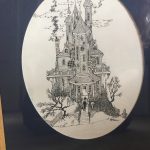 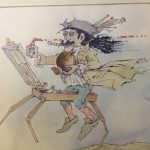 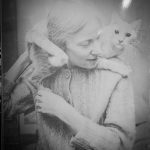 PATRICE WILDING / STAFF PHOTO In this undated portrait, a young Barbara Remington affectionately clings to a feline friend. Cats frequently appeared in her sketchbooks and paintings throughout the years. 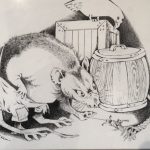 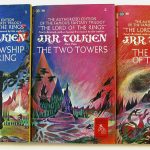 SUBMITTED PHOTOS Susquehanna County resident Barbara Remington illustrated the original American paperback editions of J.R.R. Tolkien’s “The Hobbit” and “The Lord of the Rings” for Ballantine Books in the mid-1960s. 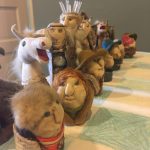 “We all have pages from books she’s illustrated. Barbara is incredibly generous and always gives the most thoughtful presents. Over the years, she’s given us all things that really should be in museums. Everything she does is just so artistic. She’s very funny, and her mind is just unbelievable and so creative. Everything she did, she did with the Barbara Remington flair. If she brought a cake or something to a party, you knew she did it. It had Barbara Remington written all over it.” — Melanie Urdang, employed in the entertainment industry and a friend for 30 years

“As an artist, I envy her skills. She far exceeds me with her talent. … She’s one of a kind. Exciting is when, in her drawings, you get to meet new friends: her imaginary ones. And she will, on occasion, stop by to greet you. … Illustrators are considered non-verbal communicators, but her creations — so skillfully rendered — come to life and speak louder than words. An extraordinary artist who takes her true self along on the journey.” — James Penedos, painter and owner of Springville Schoolhouse Art Studios, which is home to much of Remington’s original works and writings

“She really has a knack for portraiture in a caricature sense. She knows how to find the essential parts of someone and relate them. We’re both old-school and don’t have computers, so we exchange postcards. Her latest was a beauty.”  — John Bromberg performance artist and friend