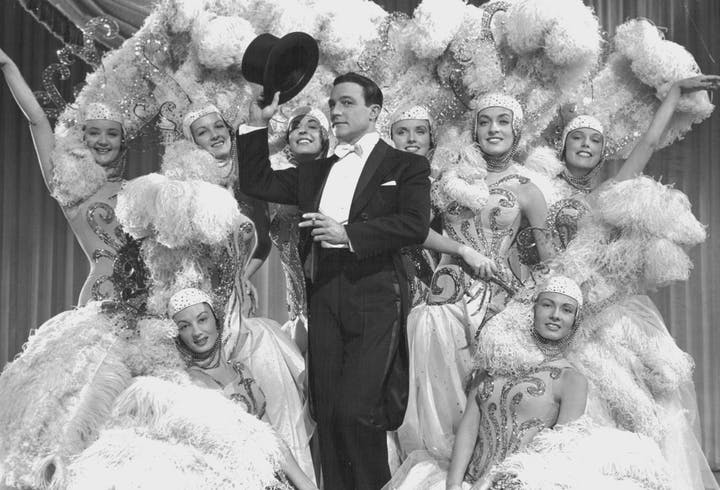 I think that film acting today is better than film acting during the Hollywood Golden Age, which I consider to have run from 1939 until 1966, save the 1966 release of “Who’s Afraid of Virginia Woolf?” There are only a few actors (Brando, Olivier, Stewart and a few others) who I think were giving really hearty performances during the Golden Age. Otherwise, there were a lot of replaceable actors. It’s not that they weren’t good, just that their skill sets were fairly limited. Therefore, a whole host of actors could have played the parts they were playing.

One actor, perhaps beyond all the others of his time, who could not be replaced in his most critical roles is Gene Kelly. If you want to talk about diverse and unique skill sets, you have to start with him.

You’ll often hear people reference old school actors who were “triple threats,” or being able to act, sing and dance. Gene is the very best of the triple threat breed that Old Hollywood so craved.

To take it one-by one, his acting chops, I’ve recently discovered, were pretty underrated. He was an incredibly expressive and charming performer. His characters often give off a sassy and sarcastic vibe, but he never turned them into being unlikable grumps. His iconic smile made him lovable and real. He could ham it up, no doubt, but he never became a caricature. He could, and often did, express a very real human joy.

His singing voice was a simple croon that doesn’t necessarily stand out, but, again, is rather expressive. Just because he wasn’t belting out impossible notes doesn’t mean he couldn’t carry a tune, because he totally could. And he did (see: “Singin’ in the Rain”).

As far as his dancing ability, what hasn’t already been said? His pure athleticism in the “An American in Paris” ballet sequence. Working with an animated partner who wasn’t there in “The Worry Song” from “Anchors Aweigh.” Switching styles and demanding perfection of his co-stars in “Good Morning” from “Singin’ in the Rain.” The technical difficulty and overall challenge that is tap dancing on roller skates in “It’s Always Fair Weather.” The man was a beast. There’s a seemingly endless collection of his incredible dancing work out there to be explored. If you aren’t familiar, I’d suggest looking into some of it.

I was under the impression for some time that Gene Kelly was just the mean guy who yelled at Debbie Reynolds. But last week, the offer came up to see “Singin’ in the Rain” at the Dietrich Theater in Tunkhannock and, though I had already seen the film a few times, it seemed like an awesome opportunity.

In preparation for revisiting this film, I watched “An American in Paris” for the first time. As a film, it’s a bit meh. As a Gene Kelly vehicle, it’s absolutely glorious. I was blown away by his performance and so I took the time to read a bit more about him. He’s from Pennsylvania! He made an archival cameo in “Family Guy!” He was more a perfectionist than just a mean guy!

So watching “Singin’ in the Rain” with this new perspective was eye-opening to say the least. I needed to see more. So I sought out “Anchors Aweigh,” the root of the “Family Guy” cameo and his lone Oscar nomination. Again, the film was pretty bland, but he was fantastic. What would these movies have been without Gene? Probably unremarkable.

To a lesser extent, that includes “Singin’ in the Rain.” Despite being a lot better on its own than “An American in Paris” and “Anchors Aweigh,” it was co-directed by Gene Kelly himself. Without his contributions, the movie would’ve been a shell of what it is. He was actually quite of a revolutionary what with directing himself. Granted, this was mostly just due to his choreography contributions. However, the best parts of “Singin’,” “Paris” and “Anchors” is the choreography, so his directorial accomplishments are nothing to sneeze at.

Chaplin and Keaton and others directed themselves before, but the Golden Age was not known for its auteurs. Gene wasn’t really doing much behind the camera from what I understand, but his control of what went down on-screen paid off.

Alright, enough gushing. I do feel like Gene Kelly’s work is not completely respected across the board from both casual moviegoers and historians alike. He was a truly unique talent and one of Pennsylvania’s finest. And his birthday is later this month, so maybe this column topic isn’t so random. No matter, my only hope is that we as a culture-consuming society start to put some well-earned respect on the name of the great Gene Kelly.