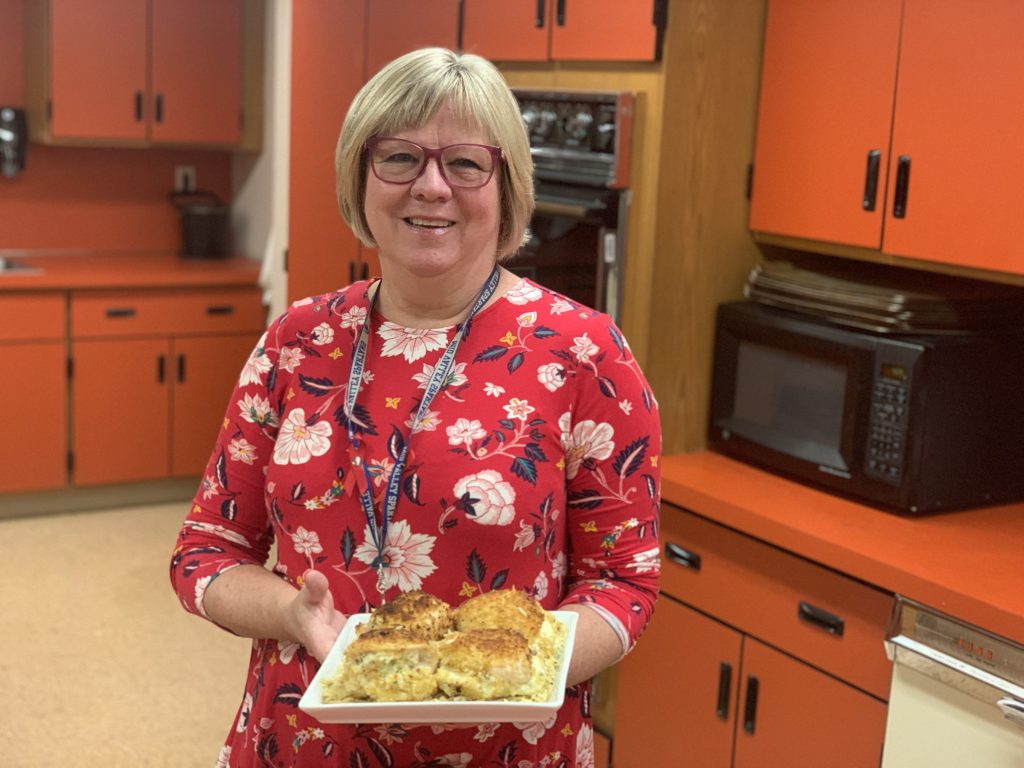 To say we here at Local Flavor are big fans of home-cooking is an understatement.

Our sole purpose is to find some of the best cooks in Northeast Pennsylvania and try their favorite dishes. We also love to share those recipes with you. Can you imagine a world where home-cooked meals didn’t exist? We love a good steakhouse burger or a steaming hot plate of pasta at an Italian restaurant, but there’s nothing quite like a meal made from scratch in your own kitchen.
Lorna Engler knows that to be true. It’s thanks to educators like her — she’s a family and consumer sciences teacher at Mid Valley Secondary Center — that the love of cooking passes on to the next generation.
“We all have to eat,” Engler said with a laugh on a recent afternoon inside her Throop classroom. “At some point, you’re going to move out of your (family) home and you’re going to need to know how to cook for yourself and sustain yourself. (A class like) this teaches the basics.”
Engler’s Advanced Foods class learns not only the basics but also how to think abstractly and get creative in the kitchen. One of the recipes she uses, Chicken Bombs, starts with a base of chicken breasts stuffed with cream cheese, onion, jalapeno, bacon and cheddar. The recipe — which earned Engler’s classroom a $50 gift card to Riccardo’s Market, 1219 Wheeler Ave., Dunmore, through Local Flavor Gives Back — is given to the 11th- and 12th-graders so they can put their own spin on it. They experiment with different fillings to add to the recipe.
“The peppers, onion, bacon and cheddar, that’s just one variation,” Engler said. “One student used spinach, strawberries and feta (cheese), and it turned out really good.”
It’s an easy and quick dish, too, Engler said, and she tries to incorporate into her curriculum recipes that are simple to make. That way, even if someone’s busy, they still make a dinner from scratch.
“I don’t want them to have to rely on the drive-through or processed foods,” she said.
In Advanced Foods, students also learn to make different kinds of soups and quick breads before moving on to challenges such as Cupcake Wars, a classroom version of Food Network show “Chopped” and a series of classes where the students are encouraged to take a basic recipe — such as macaroni and cheese, nachos or ramen — and turn it on its head.
“They just get so creative with it and have a lot of fun,” Engler said.
While many districts are cutting family and consumer science programs, Engler has students in grades seven through 12 across several classes who learn real-life basics including finances, sewing and child care (which involves infant simulator dolls students must take care of overnight like a real baby). Cooking remains an integral part of the program, Engler said.
“We’re getting away from people making home-cooked meals and sitting around the table, sharing a meal together,” she said. “That’s such an important time, but I want people to be able to be self-sufficient. … It’s valuable.”

Mix cream cheese, onion, jalapeño, bacon and cheddar until well mixed. Spread on chicken cutlets, fold over and secure with a toothpick. Dredge in flour. Dip in egg wash then coat with breadcrumbs. Quickly brown each side in oil. Remove to a baking dish and cover with foil. Bake at 350 F for 30 minutes or until chicken is thoroughly cooked and no longer pink.