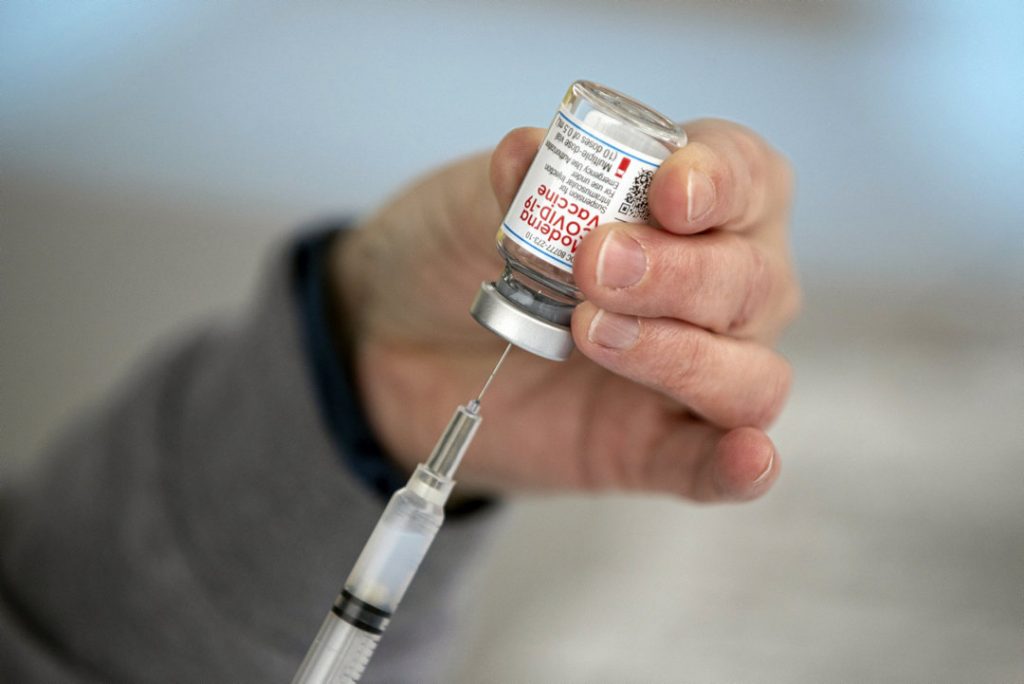 When can you get the COVID-19 vaccine? Here’s what you need to know

When can I get the COVID-19 vaccine?

The simplest, and perhaps least helpful, answer to the vaccine question is: It depends. Limited supply, delays at the federal level and staffing limitations at the local level have all slowed distribution.

“There’s a finite number of vaccines we get every week,” Health Secretary Rachel Levine said. “We can’t ask for more. It doesn’t change.”

Over the last four weeks, Pennsylvania received and passed along more than 550,000 doses of the Moderna and Pfizer vaccines to various clinics and health systems. Those facilities, in turn, have distributed nearly 200,000 doses so far.

Right now, the state is prioritizing frontline healthcare workers, healthcare students and trainees and those who live or work in long-term care facilities (assisted living, nursing homes, etc.) as part of what it’s calling Phase 1A.

If you qualify for vaccination right now, it’s likely you’ve already been informed of your status by your employer or, in the case of residents of long-term care facilities, a facility worker.

The definition of healthcare workers in Phase 1A is quite broad and includes dentists, dental hygienists, emergency technicians and pharmacists.

Within the broad category, Pennsylvania’s distribution plan further prioritizes those healthcare workers (and this could include volunteers) who have direct patient contact and are unable to telework, those without a known infection in the last 90 days, those who work in a specific “COVID-19 facing unit” (such as an ER or ICU), long-term care residents whose underlying conditions make them vulnerable to severe illness or death and employees of facilities that provide specialized nursing care.

There’s good reason for the focus on long-term care facilities because, in the first year of the pandemic, those locations accounted for more than two-thirds of the state’s COVID-related deaths.

The health systems themselves have a great deal of latitude in how, when and to whom they distribute vaccines within this plan. Since the initial plan was released, in mid-December, the only significant change was a mandate that 10 percent of vaccines be reserved for healthcare workers outside the major systems. That would include, for example, nurses at small, community nonprofits or general physicians with an independent practice.

There’s good reason for the latitude.

Pfizer’s vaccine must be stored at extremely cold temperatures until shortly before it is administered. Once thawed, the clock for a batch to be distributed starts ticking down. Rather than discard the vaccine, many healthcare providers are being instructed to distribute them to whoever they can, even if that means (for example) vaccinating a hospital nurse outside a COVID-19 facing unit faster than they normally would. 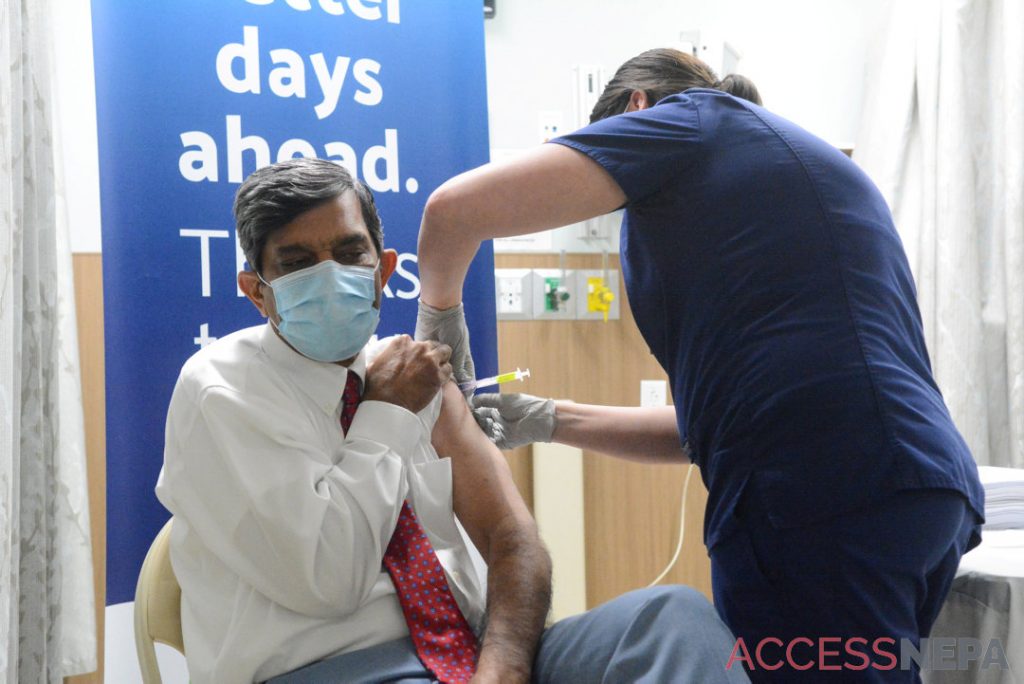 Phase 1B, which is possibly a month or more away, expands the targeted groups for vaccination to a host of essential workers and vulnerable populations who cannot work remotely or remain socially distanced. The list includes:

Also in this phase, anyone else living in any other type of congregate setting and anyone 75 years or older.

Also in this phase, anyone else living in any other type of congregate setting and anyone 75 years or older.

Phase 2, which will only happen once there’s sufficient supply, aims to vaccinate anyone over the age of 16 not already vaccinated with a larger goal of vaccinating at least two-thirds to three-quarters of the state population. That would require at least 10 million doses of vaccine. 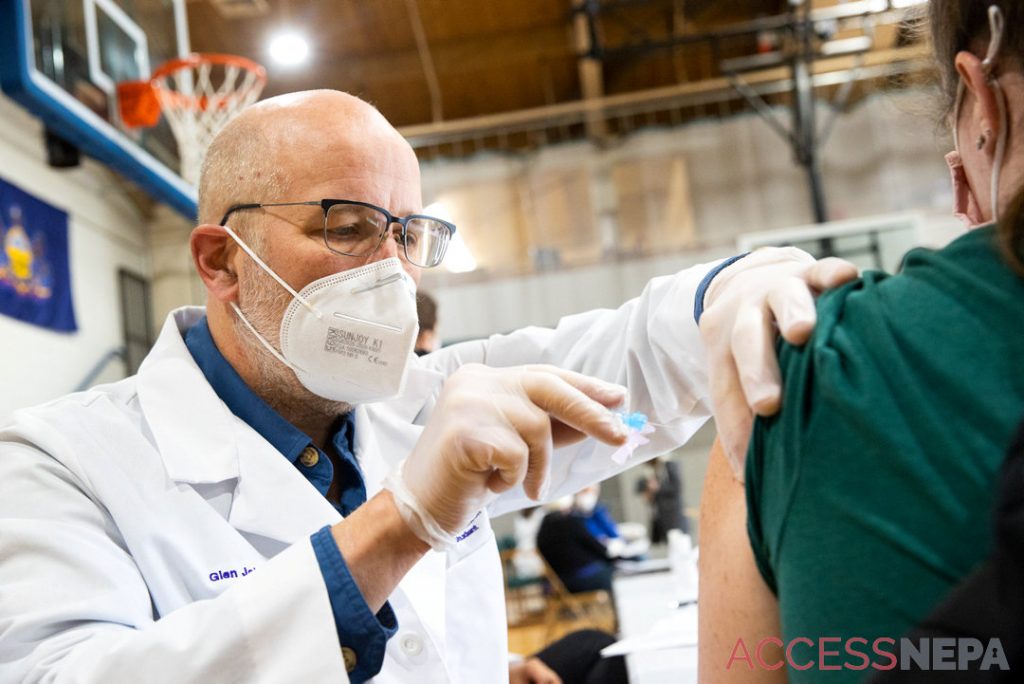 CHRISTOPHER DOLAN / STAFF PHOTOGRAPHER
University of Scranton nursing student Glen Johnson administers a Moderna COVID-19 vaccine to a medical professional Jan. 9, 2021, at Throop Civic Center. The Lackawanna Medical Society along with Medicap Pharmacy, VNA Hospice, Wilkes University pharmacy department and volunteers from Marywood’s physician assistant program and the University of Scranton’s nursing program had about 400 doses of the Moderna vaccine on hand for those in the Phase 1A group of the vaccine rollout plan.

Phase 2, which will only happen once there’s sufficient supply, aims to vaccinate anyone over the age of 16 not already vaccinated with a larger goal of vaccinating at least two-thirds to three-quarters of the state population. That would require at least 10 million doses of vaccine.

For now, state officials are hesitant to provide a timetable for when each of phases will roll out given a variety of factors largely beyond their control. Initially, Pennsylvania had aimed to complete Phase 1B by the end of January or early February, but that timetable proved an all-too-optimistic one given the pace of supplies reaching the state from the federal government.

A few developments that emerged Friday could speed up the process considerably.

First, the Trump administration has approved the use of pharmacies as vaccine distribution sites. The specifics are still being worked out but the state will be able to partner with private companies — much like it has for COVID-19 testing — to vaccinate the general public.

Second, the incoming Biden administration announced that it won’t hold back vaccines that are, for now, being withheld from states to ensure the availability of second doses. This is somewhat controversial.

The United Kingdom, as one example, has chosen to distribute vaccines as they become available. That creates a danger that second shots, which are required for maximum immunity against the virus, won’t be administered within the specified time period.

Levine said Pennsylvania still supports the scientific consensus: The second shots should not be delayed, even if it means fewer people receive the first.

Of course, that’s not a decision hospitals or the state can make. As Levine explained, the Trump administration is itself withholding one dose for every dose that is administered.
Biden’s decision to release that stockpile of withheld second doses, Levine said, is “fine as long as the second dose is available.”

Gov. Tom Wolf said Friday that he understood that Biden’s decision was based on an expectation that the incoming administration will use the Defense Production Act to expedite the manufacture of COVID vaccines such that enough will be available for both shots.

“They may know something I don’t,” Wolf said. “[But] we’re all on the same page of trying to get these vaccines out as quickly as possible.”