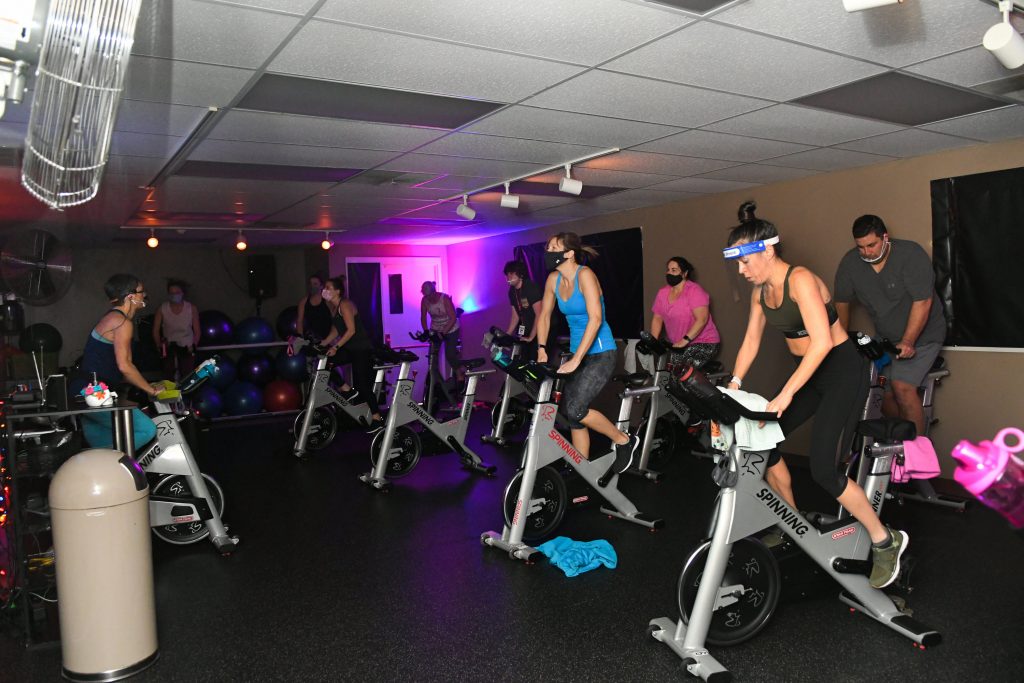 I was not expecting my first spin class to be above a Boyer’s supermarket in Orwigsburg. To be honest, I was not expecting to take a spin class at all. But here I was, a guy whose idea of strenuous exercise is getting up for seconds at a foreign policy lecture buffet, getting strapped in for an exhilarating workout at Re-Cycle Sports. When co-owner Linda Walinsky tells me that the class is in the dark and no one cares what you’re doing, I felt relieved. When she said that she locks the door so nobody can leave, I didn’t feel as relieved. Linda, whose mantra is “you come in, you work out, you sweat, you feel great,” founded Re-Cycle Sports with her husband, Wally, in 2013. After 35 years of marriage, the two are so close that they finish each other’s sentences.

“Unfortunately,” Linda said, “spinning gets a bad rap sometimes because instructors holler at you that you’re not doing it right —”

“— But our way of teaching,” Wally said, “is based around that your bike is yours.”

Basically, they won’t walk over to you and mess with your bike. Wally adds that unlike cycling outdoors, there are no dogs or bugs chasing you as you ride.

“Don’t be surprised if your legs feel like Jell-O,” Jen Steinman told me. “I remember my first time, I was sore for three to four days.”

Steinman, of Minersville, has been taking classes since September.

“A lot of it has to do with Linda and Abby,” she said. “They make it fun and motivate you. I like the music.”

“I just really enjoy motivating them with music,” said instructor Abby Forney. “When I do my spin ride, I like to choose songs that are motivating, that have a good beat. It’s all about the music.”

The only thing more eclectic than the clientele is Linda’s spin class playlist. It has everything from nightclub bangers to heavy metal to a country-western cover of “Bohemian Rhapsody.” The colors in the bike room are psychedelic, but when the remix of “Fortunate Son” came on, it was clear that this was no love-in.

“You’ll be sore tomorrow,” said Caroline Schuster of Pottsville, who has been taking classes since 2019, “but it’s such a good workout. I love the music that they play. Every class is different. The group of people here hold you accountable, so you can’t just take breaks whenever you want to.” 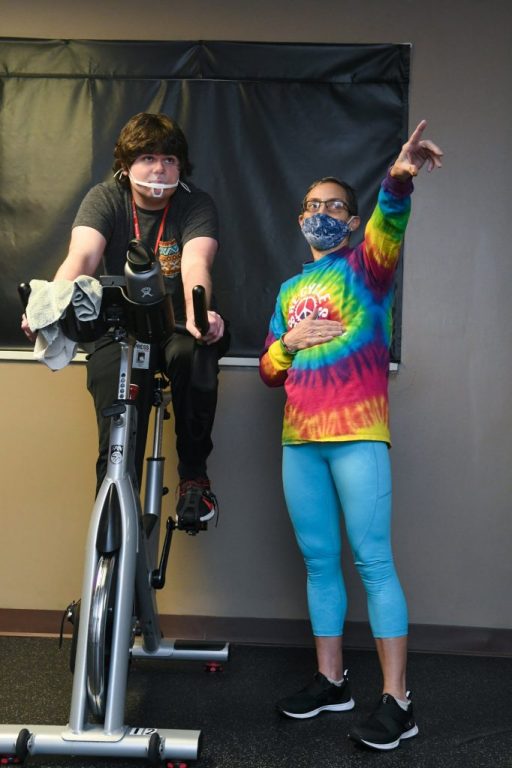 Before the pandemic, Re-Cycle had various themed workouts. For the 50th anniversary of Woodstock in 2019, the Walinskys celebrated “Spinstock.” When the gym was forced to temporarily close in March, Linda did free virtual workout classes. With reopening in July came new precautions. The bikes are now 6 feet apart, and wipes and ultraviolet lights are used to clean them.

“—To clean on the way out,” Linda finished.

For Halloween 2020, Linda asked all of her customers to bring in Mexican sugar skulls. The tradition continued, to the point that Linda and Wally get a new sugar skull every other day. Now, sugar skulls are all over the gym.

“Our job is to help people stay healthy,” Linda said, “and we have people who bring their children. People come that are 14 to 80, and it’s really a matter of building a trust relationship.”

Although their capacity is only at 50%, the community spirit at Re-Cycle Sports remains.