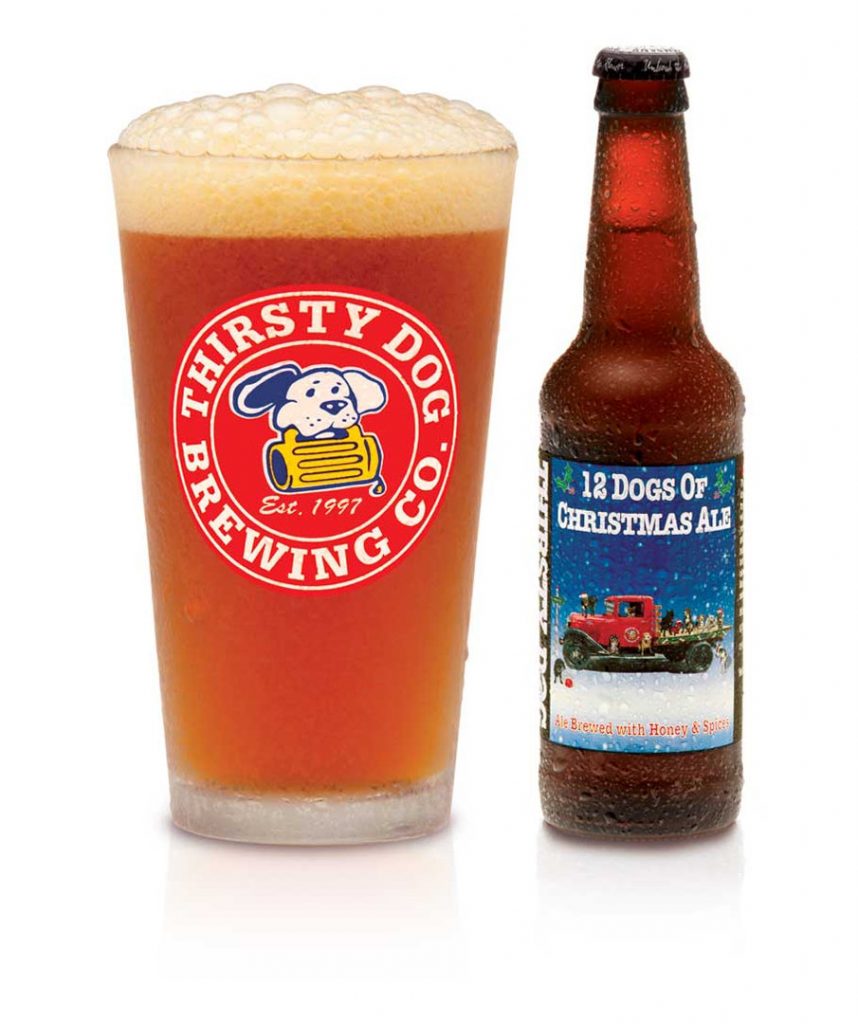 12 Dogs seasonal ale kicks off year with a bang

I hope everyone had the opportunity to make new memories and spend some time being thankful as 2020 came to a close. Although the year was very different from most, my family tried to keep some of the same traditions that we hold near and dear: holiday foods, cookies and sweets.

But we also tried some new things this year, such as ordering Chinese food and pizza from local restaurants in lieu of making a large dinner at home with family and friends. The one tradition I did not change, however, was trying a new seasonal beverage to keep spirits merry and bright.

I decided to try to find a brewery close to our area and found an interesting choice in neighboring Ohio. Thirsty Dog Brewing Co. was established in 1997 and operates out of Akron. It uses specialty American and European hops combined with high-grade malted barley with specialty ingredients in small batches to craft the brews. Thirsty Dog has four locations in Ohio to serve customers, and it offers 10 year-round beers, 13 seasonal beers, 11 limited releases, eight barrel-aged beers and five barrel-aged sours. You can find the brewery online at thirstydog.com.

I chose one of the barrel-aged ales, 12 Dogs of Christmas, to ring in the year with cheer. The bottle is festive, with a shiny green label with iridescent snowflakes in the background and the beer’s name in bright gold script. The top of the bottle came wrapped in gold foil, reminiscent of a Champagne bottle.

Thirsty Dog describes 12 Dogs as an ale brewed with honey, cinnamon, ginger, nutmeg and secret ingredients. The brewery ages it in bourbon barrels for approximately a year. As a seasonal brew, it is produced in limited quantities and only available from October through December.

The pour was impressive, with the ale appearing thick with a reddish hue. The head, approximately 1 3⁄4 inches, stuck around as it settled.

The spicy, inviting aroma smelled delicious. Cinnamon, nutmeg and ginger jumped out first, with a hoppy undertone paired with an oaky aroma from the barrel-aging.

The first sip came across as powerful, spicy and delightful. The mouthfeel was thick and slightly alcoholic from the bourbon. The aftertaste had a combination of spiciness with an underlying hint of bourbon, but it wasn’t too overwhelming.

This brew comes in at 10.4% ABV and clocked in low on the bitterness scale with 17 IBUs (International Bitterness Units), making it generally mild in hoppiness, which is typical for an ale.

I enjoyed this beverage on New Year’s Eve and paired it with a cheese and cracker platter while waiting to watch the ball drop. I truly enjoyed it from start to finish. It was a great addition to the festivities, and I would highly recommend looking for this on shelves next fall when it returns.

I hope you all have a great new year, and I resolve to continue to try new beers and let you know how that goes. If you have any suggestions for beers for me to try, let me know.