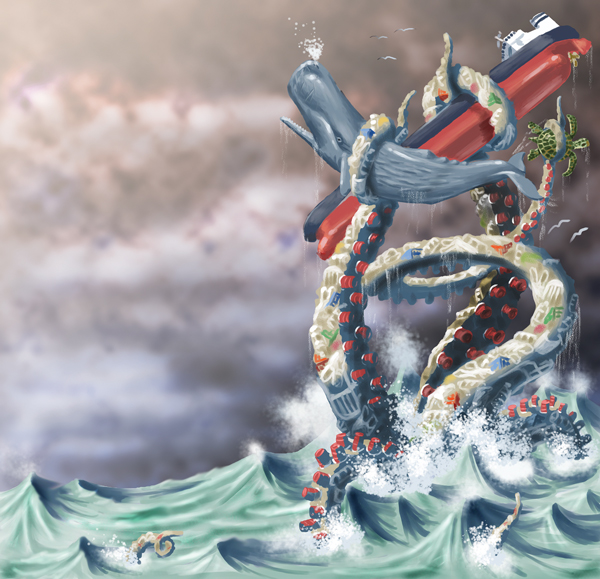 The problem with plastic

Recently the Marriott hotel company announced that it will replace the little plastic shampoo, conditioner and bath gel bottles in its rooms with dispensers or bigger bottles. In doing so, it joins the ranks of other big companies, such as McDonald’s, Disney and Guinness, in pledging to reduce the use of plastic that may find its way into the environment.

This trend of corporate environmental responsibility is driven by some scary numbers. It’s estimated that 8 million tons of plastic enter the ocean every year. This joins more than 150 million tons already circulating in the world’s oceans. A trillion single-use plastic bags are used every year around the world, with the vast majority of them not being recycled.

The problem with plastic is that it doesn’t decompose and return to the earth like organic materials. It just breaks down into smaller and smaller pieces until it becomes microplastic. Dramatic pictures of sea creatures entangled in various types of plastic are common on the internet. Small sea creatures ingest microplastics and they rise all the way up the food chain into humans. Scientists have found microplastics in people around the world.

National Geographic is in the midst of a multiyear, multimedia effort to raise awareness about the plastic crisis. Part of this effort is an online feature called What Happens to the Plastic We Throw Out (https://on.natgeo.com/30Pq7hy).

The site uses the remote, uninhabited Henderson Island in the south Pacific Ocean to illustrate the depth of the plastic problem. Its location and prevailing winds and currents make it a magnet for floating plastic. The beautiful, white sand beaches, located 3,000 miles from any major population centers, are littered with more than 37 million pieces of plastic.

The site opens with a video panning over the litter-strewn beach. It’s unbelieveable that a small island with no people on it could be covered with so much trash.

As you scroll down through the site, the journey of discarded plastic is traced. It starts with a world map showing which countries have waste management problems. Further down, the rivers that disgorge the most plastic into the ocean are highlighted.

Next is a truly disturbing video of a tributary to the Pasig River in Manila, Philippines. The stream is completely choked with all manner of plastic debris. The corrugated tin shacks lining both sides of the waterway are the epitome of poverty.

An animation shows the route of ocean-bound plastic, and how long it takes to get from land to the ocean gyre it ends up in. Finally, a video of a manta ray swimming through an underwater blizzard of plastic illustrates the problem in stark terms.

What Happens to the Plastic We Throw Out is part of a National Graphic series called Planet or Plastic? on nationalgeographic.com. You have to be a subscriber to view all of the features.