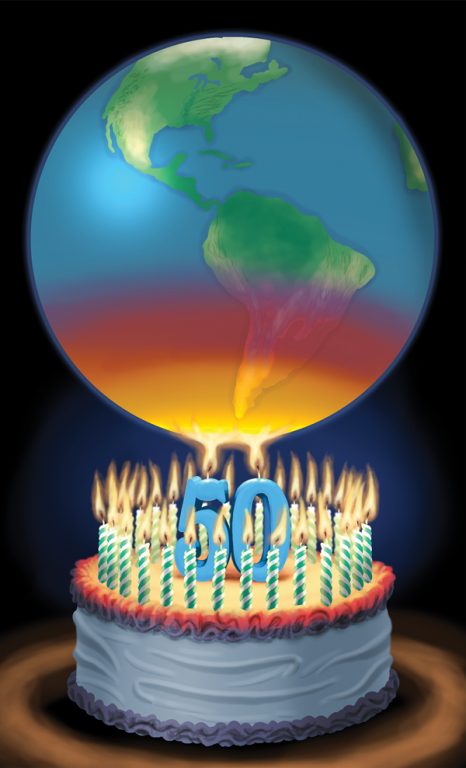 Fifty years ago, the first Earth Day was observed on April 22, 1970. It was a response to the growing realization that people were polluting the planet so much that it was causing grave harm to people and the environment.

In the United States 20 million people participated in various events to support the cause. It is recognized as the largest civic event in world history. Landmark environmental legislation was passed in its wake, including the Clean Air, Clean Water and Endangered Species Acts. As a result, the air and water have gotten consistently cleaner over the last 50 years. Unfortunately, the last three years have seen an increase in air pollution due to increases in driving, the burning of natural gas, wildfires and the Trump administration’s lax enforcement of environmental regulations.

Due to the COVID-19 pandemic, there won’t be massive marches in the streets to mark the 50th anniversary of Earth Day. But you can still raise your voice in support of the planet. Earthday.org is organizing virtual activities to mark the day, raise awareness of the challenges the Earth still faces and provide opportunities to take action.

The theme for Earth Day this year is climate action. As serious as the pollution threat was in 1970, climate change poses perhaps an even greater threat to life on the planet. The site’s goal is to change behavior and legislation to reverse the course of the crisis in the same way the first Earth Day did with pollution.

The home page of the site features a plea at the top to “join us for 24 hours of action” on April 22. Every hour that day the site will feature global conversations, calls to action, performances, video teach-ins and more. The page also features a map of the world showing where all the virtual activities will originate from.

Of course the site doesn’t exist for just one day. It offers plenty of ways to engage every other day of the year. There’s information on what you can do as an individual to combat climate change. There are groups you can join in collective efforts to confront the problem. There’s advice on lobbying government and voting for candidates who will work to produce positive change. There are sections featuring artists, athletes and celebrities working to raise awareness of the issue.

Earthday.org is a well-designed and informative site that supports a very worthy cause. My only complaint is that it can be a little long winded. You sometimes have to slog through a lot of repetitive reading in order to get to the actionable information you’re looking for.