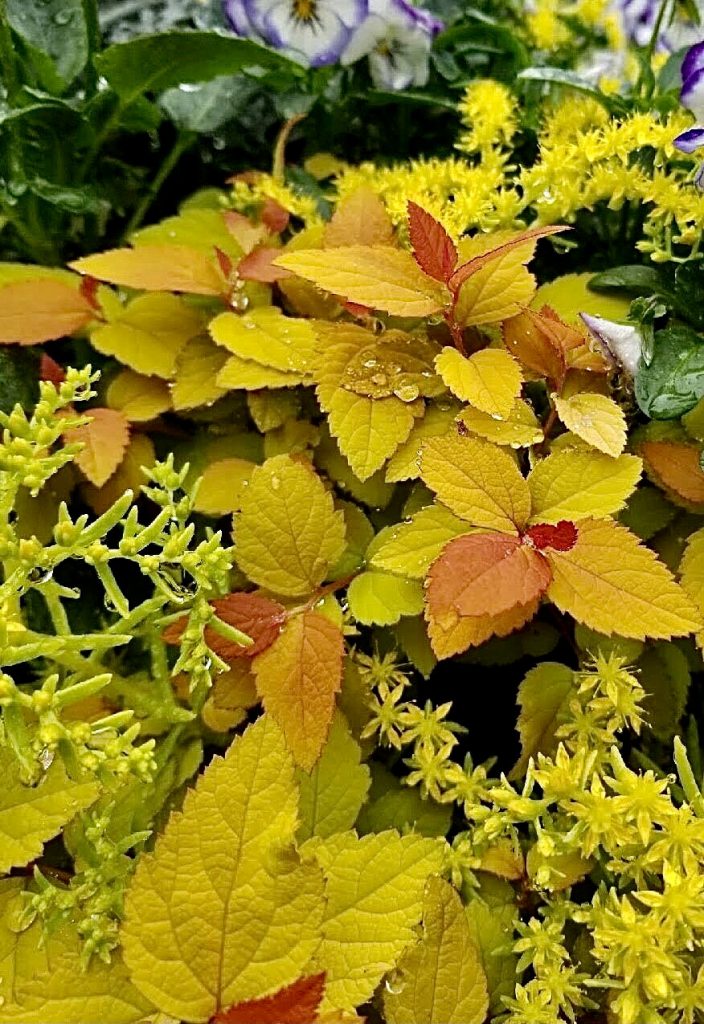 Dad, you’ve got to come look at this spring combination, said my color deign guru son, James. It made me want to scream wow because it was so beautiful. He chuckled, saying it was kind of an accident. The stunning partnership featured Double Play Candy Corn spirea and Primo Wild Rose heuchera. One of his crew had cut the spirea to the ground in late fall as she believed it to be dead, versus deciduous and dormant

James uses it as a fall through spring plant. I would call that perennial. James plants in giant horse trough type containers. The fall plants he receives are gallon sized and look to be on fire with color. I would say he is using them as an annual but he lets them go dormant and flush with late April to early March regrowth which makes this perennial. On the other hand, he pulls them in late April for a complete redesign of the containers.

The Garden Guy uses it in the flower border and it never gets removed. It may be paired with Rocking Blue Suede Shoes salvia, Red Sunstar pentas or whatever combination I feel like trying. In another area I am using it as a shrub much like everyone else would use a spirea.

I remember the first year I saw it in a combination that James had planted in late September, I was amazed with the beauty of the spirea. I called my buddy at LSU and asked him what to expect. His comments were: It will probably not do too well in the South. We all thought that, how could it?

It quickly proved us not only wrong but has become one of the hottest shrubs in the market. Even saying that seems odd to me as I think perennial foliage, every time I see it. You are thinking the spirea blooms, right? Well, you see, if we think it won’t grow in the South it stands to reason it won’t bloom. Wrong.

My first combo planting was an accident of sorts too as I thought I had removed it because I thought it was dead. So, my surprise combination was the flaming yellow foliage with orange tips of the Double Play Candy Corn Spirea partnered with the complimentary blue from Rockin Blue Suede Shoes salvia.

I guess in the South we just aren’t used to working with fine textured stems of deciduous plants particularly after they have lost their leaves. Double Play Candy Corn spirea seems most forgiving of our horticultural blunders and even rewards us, making us look like design gurus. 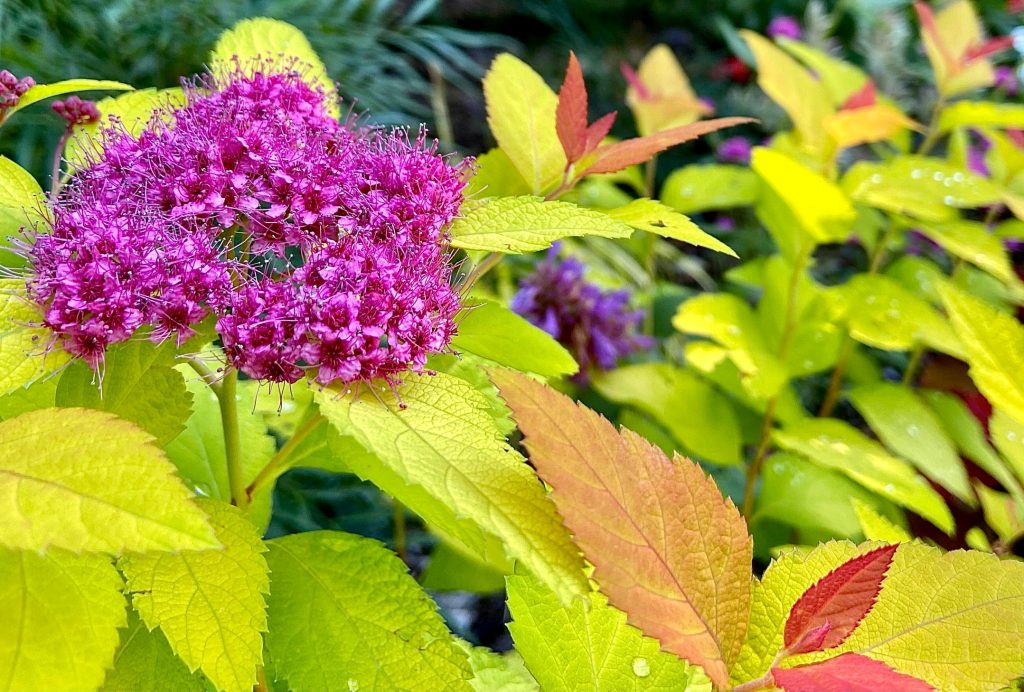 Such as one other instance: James planted Lemon Coral sedum as a fall combo with the fiery orange-leaved spirea. All is great and then the spirea goes into dormancy and is forgotten. The tough as nails sedum, keeps growing and spreading. Come March, it’s magic as the spirea shoots forth and beautifully intermingles with the chartreuse foliage of the Lemon Coral.

Double Play Candy Corn is known botanically as Spirea japonica or Japanese spirea and is cold hardy from zones 4-8. The plants bloom on new wood so cutting back in late winter is always a good thing. Deadheading or a light shearing after bloom will often stimulate another round of blooms, which should be bringing in butterflies.

You’ll like its compact habit reaching 18 to 24 inches with a mound habit. Even though You’ll find them great as a border accent plant or even grown as a small hedge and, yes, horse trough containers too.

Norman Winter, horticulturist, garden speaker and author of, “Tough-as-Nails Flowers for the South” and “Captivating Combinations: Color and Style in the Garden.” Follow him on Facebook.