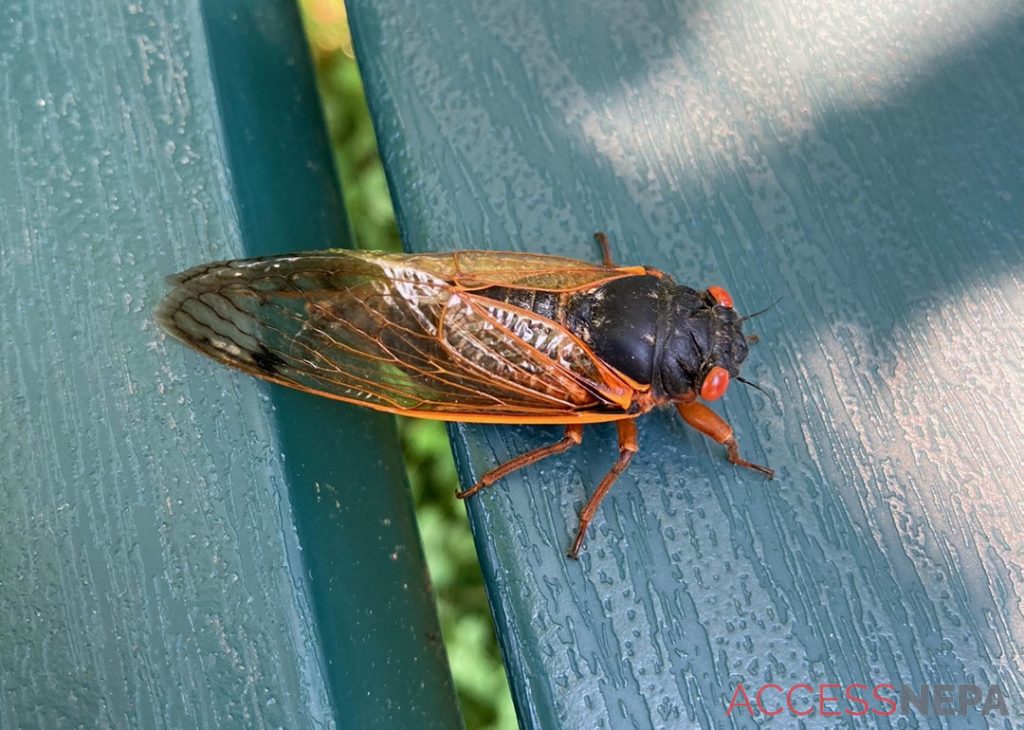 One of nature’s most fascinating spectacles is unfolding less than spectacularly in Lackawanna County.

A cicada in Newport Township, south of Glen Lyon

Although the periodical cicadas belonging to what is known as Brood X have been a source of — depending on perspective — annoyance or elation for people across their 15-state range for weeks now, the insects have been mostly absent in Lackawanna County.

“It’s been a few here and there, but not as many in the valley as I thought there would be,” said a disappointed Tony Santoli, who is Scranton’s city forester.

“They may be somewhere else, but I haven’t seen too many in our area.”

After spending 17 years underground as nymphs, the Brood X cicadas started emerging by the millions in late May as soil temperatures warmed, first in the southern states and then farther north.

Once above ground and shedding their nymphal skins, the adult bugs with distinctive red eyes and orange-veined wings have a singular purpose: to mate before they die so the 17-year cycle can start all over again.

In Pennsylvania, where the cicadas have appeared en masse in several southeastern and south central counties, Lackawanna and Luzerne counties lie at the northern tip of the Brood X range.

Timothy Latz, assistant district forester for the state Bureau of Forestry’s Pinchot Forest District, which encompasses both counties, said the heaviest concentrations regionally appear to be in the southern Wyoming Valley.

“We’re talking places like Glen Lyon, Mocanaqua, Shickshinny. They are in really large numbers. … In Mocanaqua, it’s like bells ringing down there. They’re loud. That whole area has a good population,” he said.

Coming north, the numbers start thinning out, he said.

Even in the southern portions of Lackawanna County, there don’t seem to be many, Latz said. At Lackawanna State Park in North Abington Twp., where the forest district is headquartered, it’s “basically nothing.”

That would appear to fit the historical pattern.

A review of The Times-Tribune archives indicates the appearance of Brood X cicadas in the county has been an iffy proposition for at least the last century.

The last time the cicadas seem to have shown up in any notable numbers was 1953. Even then, it was spotty, with only portions of the Midvalley apparently experiencing a large concentration of the insects.

Cicada broods have been known to go extinct in certain areas, but without older and more complete records, it would be difficult to say whether the insects’ scarcity this year represents a continuing decline or is simply a function of the county’s location on the fringe of the range, said Michael Skvarla, an assistant research professor and head of the Insect Identification Laboratory at Penn State University.

“My guess is that it’s because the county is on the edge of the emergence, but it’s hard to tell,” Skvarla said in an email. “Who knows what they were doing before the region was deforested in the 1800s.”

Having done their reproductive duty, this year’s Brood X cicadas will be dying off in the next week or so, Santoli said.

However, he is confident there is no imminent danger of Brood X disappearing from Lackawanna County, even if their numbers stay low.

“They will be here with us for the next 100 years-plus,” he said. “Nature controls. We don’t have any control over it.”