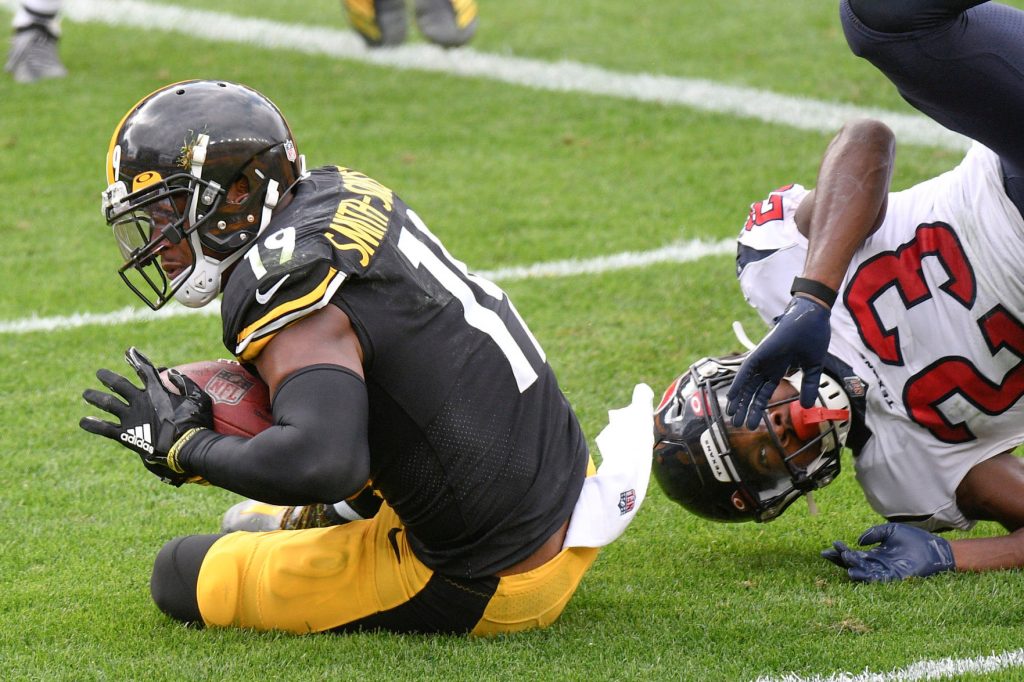 Things to watch in the Eagles-Steelers game

Happy Friday! By now the bliss from seeing the Eagles get their first win last Sunday has probably worn off, just in time for another game. The Eagles will take the short trip to Pittsburgh tomorrow for Sunday’s cross-state matchup against the Steelers, and by now you’ve likely heard there will be a small number of fans in the stands. The Eagles don’t seem too bothered by the competitive advantage that might pose, instead suggesting any energy from the crowd might actually help them play better.

Doug Pederson will speak with reporters Friday morning before the Eagles hold their final practice of the week this afternoon. Some players will be available via videoconference afterward. The injury report will be interesting to watch. The Eagles are still thin at wide receiver. Whether any combination of DeSean Jackson, Alshon Jeffery, J.J. Arcega-Whiteside, and Quez Watkins returns bears watching.

1. Fletcher Cox and the rest of the Eagles defensive line have lived up to the expectation they had going into the season. They lead the league in sacks through four games and have been dominant in the last two weeks. The Eagles defense was built around the front four’s ability to generate a pass rush without help from blitzing linebackers or safeties. When Cox and Co. are playing the way they have the last two weeks, the Eagles will stay in games in which they otherwise wouldn’t. Whether they can continue to do so will be one of the most important factors in this game. Ben Roethlisberger has been sacked only five times this season, and he’s got the second-fastest average time to throw this year. So the Eagles secondary will have to do its part at the line of scrimmage. But it will still come down to the defensive line.

2. Jordan Mailata will make his second career start at left tackle a week after a promising regular-season debut. Mailata, a former rugby star in Australia, had never started a football game in his life before last weekend. But his strength and athleticism popped off film on numerous occasions against the Niners. He’s not always technically sound, but he has impressive tools and figures to improve quickly with the sudden playing experience while Jason Peters is sidelined. Sunday’s solid outing aside, Mailata will have a much stiffer challenge this week against the Steelers. Pittsburgh’s defense has blitzed on 51.2% of its snaps, most in the league. T.J. Watt and Bud Dupree are premiere pass rushers and off to great starts. If Mailata struggles, it wouldn’t be a surprise. If he holds his own? The Eagles should seriously consider slotting him in at left tackle for the rest of the season and perhaps even the long-term.

3. Carson Wentz. You’re probably surprised we made it this far without talking about the Eagles quarterback. There’s still plenty for Wentz to clean up from Sunday’s game against San Francisco, but he should be commended for making the plays that mattered most and finding a way to win. His throw to Travis Fulgham was vintage Wentz, and that should be encouraging. He’s running more frequently and effectively in the last two weeks, and he’s starting to get a feel for the ways in which he can help the team stay competitive. Still, this Steelers defense has a chance to be the best, or at least the second-best, defense the Eagles will face all year. If Wentz’s accuracy issues continue, the Steelers secondary is more than capable of capitalizing. If his tendency to hold onto the ball too long rears its head, the Steelers’ potent pass rush will wreak havoc. Whether Wentz is able to continue to resemble his former self will be among the most important factors in the game and moving forward.

4. The Eagles tight-end coverage through four games is nothing short of alarming. Niners tight end George Kittle had 15 catches on 15 targets for 183 yards and a touchdown against the Eagles on Sunday. Rams tight end Tyler Higbee had five catches and three touchdowns in Week 2. Steelers tight end Eric Ebron is probably watching tape of the Eagles linebackers struggling in coverage with great excitement, and the Eagles will have to be ready to correct what he and the Steelers’ coaching staff have seen.

5. Darius Slay has been a steadying force on the back end of the Eagles defense, following opposing teams’ best receivers most games. He’ll likely be matched up with JuJu Smith-Schuster, another true No. 1 receiver in the NFL. The Steelers wideout has 17 catches and three touchdowns through three games. Smith-Schuster is probably in the same tier as Terry McLaurin and Robert Woods — two receivers Slay contained effectively this year — but Slay’s matchup is still one of the most important for the Eagles this Sunday.

6. Which wide receivers will the Eagles have available? As mentioned, Jeffery, Jackson, and Watkins are all uncertain entering Friday’s practice. Arcega-Whiteside is seemingly on track to play after returning to practice, but the group will likely be shorthanded once again. Perhaps Greg Ward, John Hightower, and Fulgham can do enough for a second week in a row. The Steelers secondary will be a tougher test, though.

7. Javon Hargrave will finally get a chance to hit Roethlisberger. After spending his first four years in the NFL with the Steelers, Hargrave will be pursuing Roethlisberger in a game situation. Hargrave got a half-sack against the 49ers and is coming along well after missing all of training camp and Week 1 because of pectoral and hamstring injuries.

8. Chase Claypool is the latest rookie receiver with a chance to make plays against an Eagles team that has struggled to evaluate the position in recent years. Claypool went four picks before Jalen Hurts, so it’s not as if the Birds blatantly passed on him in April’s draft, but his success is still notable. He doesn’t have many catches (just six), but he’s averaging 25.2 yards per reception mostly thanks to an 84-yard touchdown against the Denver Broncos in Week 2. He also had an impressive sideline catch against the Giants for a 28-yard gain in the season opener. 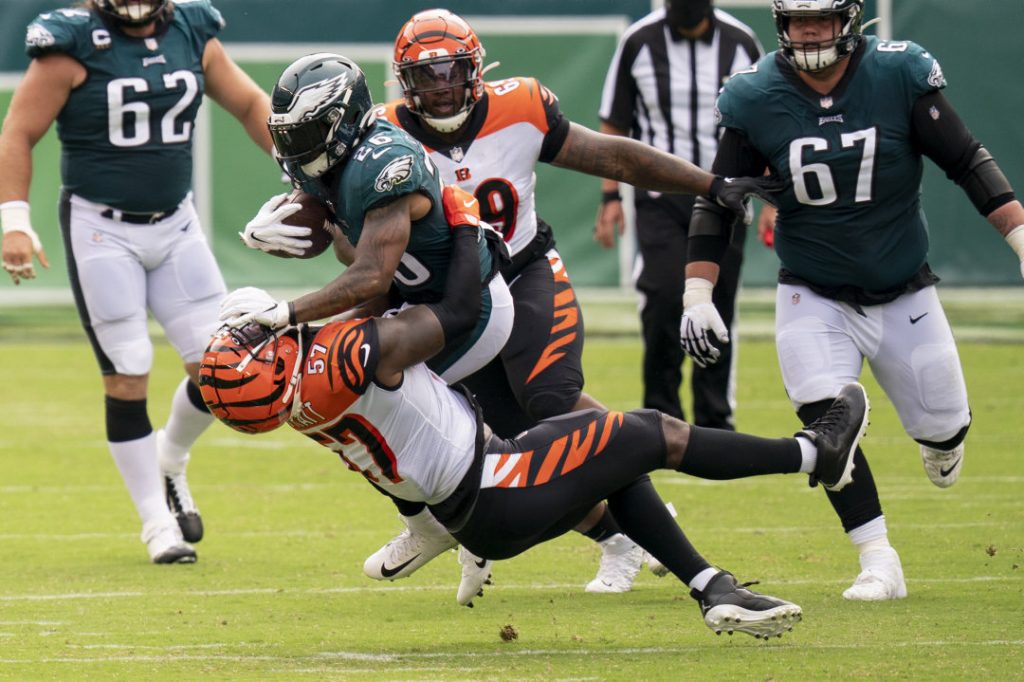 With the linebackers corps being terrible, why haven’t we seen more of the young players at that position? — from Greg Everham (@GregEverham) on Twitter.

Good question, Greg. You were one of many fans to ask about the linebacking corps, Davion Taylor and Shaun Bradley, so I’ll try to answer all those questions here.

In Taylor’s case, I think he is the Eagle who suffered most from the coronavirus-altered offseason. There was always a real possibility that Taylor would need a redshirt year. Even when the Eagles drafted him in the third round, it was well-known that he was a raw, developmental linebacker with great speed but a need to improve technically and instinctually. That said, there’s no denying his depth-chart standing is less than ideal.

During training camp, it was evident that Bradley was ahead of Taylor, playing with the second-team defense at times. It’s somewhat surprising that Alex Singleton got playing time last week instead of the sixth-round pick. I’d chalk it up to defensive coordinator Jim Schwartz’s being reluctant to play rookies who didn’t have a full summer to familiarize themselves with the system. Still, the Eagles clearly wanted to shore up the linebacking corps with a handful of low-cost rookies.

The duo’s lack of playing time has left the Eagles with an uninspiring group with dubious results. There’s a chance we’ll see the young guys later in the year, but there’s no doubt they’re behind schedule.