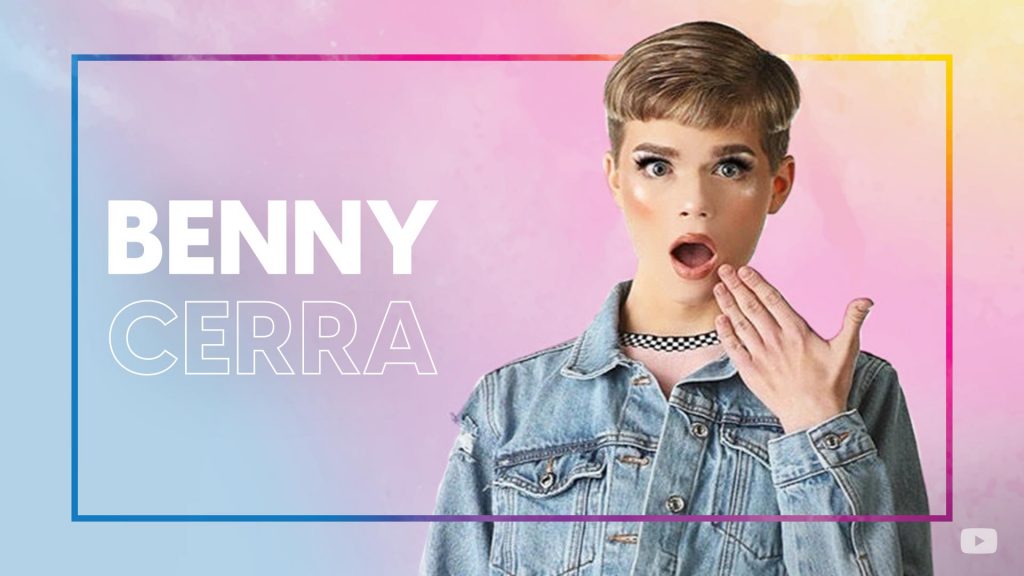 The Carbondale teen is a makeup artist known for wild and creative looks that he shows off through his Instagram (@bennycerra) and YouTube channel. And now, he’s competing against other beauty lovers on “Instant Influencer,” a weekly YouTube Originals reality show.

THE SECRET IS OUT !! 😱😱 IM ON THE NEW JAMES CHARLES REALITY COMPETITION SHOW @instantinfluencer !! This is the biggest moment of my life and I can’t wait for you all to see what happens WATCH THE VIDEO IN MY BIO !!

Noted beauty guru James Charles, who made history in 2016 as CoverGirl’s first male spokesperson and has 18.4 million subscribers to his YouTube channel, hosts the show, which premiered April 24. New episodes are available on Fridays on Charles’ channel.

Cerra, 18, who submitted an audition video last year, was chosen out of thousands of applicants and filmed the show in January in Los Angeles. It was a dream come true for the senior at Commonwealth Charter Academy, Scranton.

“I come from such a small town, and I didn’t know how my career was going to take off from here,” Cerra said during a recent phone interview. “I put in a lot of hard work and never gave up on myself and it paid off. Here I am on a reality show that millions of viewers are watching. … Everything happens for a reason, and I know that this was (a mixture of) fate and faith.”

Cerra has always been a creative spirit. Growing up and attending Carbondale Area School District, he loved to perform, and he acted and sang with local theater groups, including Corner Bistro Dinner Theatre. He also idolized larger-than-life pop stars, such as Britney Spears.

“She’s always inspired me to just be myself completely, and be true to who I am,” he said. “I would always say, ‘I’m going to be famous. I’m going to be a star.’”

In 2015, Cerra started playing with makeup when he got into his sister’s products. He felt drawn to the world of beauty and, around that time, he also started to watch beauty gurus like Charles on YouTube. Cerra was intrigued by the artistry of makeup as well as the way gurus connected with their audiences. For someone with Cerra’s performing background, he felt beauty was another way to express himself.

As the years went by, Cerra began to hone his makeup skills and create looks that ranged from impeccable eye looks and chiseled contour to lavish artistry. Cerra has painted galaxy scenes on his face, neck and chest, as well as floral designs, movie characters and logos, and even some artwork inspired by Spears’ album cover and fragrance designs.

Cerra kept on working toward his goal, snagging every new makeup release to create engaging content and build a following. He also received some attention from brands. Then, in November 2019, Charles put out an open casting call for an upcoming reality show to find the next beauty influencer, and Cerra decided to submit an audition video.

“I was kind of just like, let me just try it out and see what happens,” he said. “I didn’t know where it was going to go, but I figured I would at least try it out.”

By January, Cerra had completed a few rounds of casting and then had a Skype call for the show. To his surprise, Charles was on the other side of the screen.

“He was like, ‘Hi, sister. You made it,’ and I just screamed so loud,” Cerra said. “I could not even believe what was happening. My dream came true.”

A few days later, Cerra had to leave his family — including parents, Deana and Brian; sisters, Sam and Loni; and grandmother, Isabelle — on his first solo flight to Los Angeles to film “Instant Influencer.”

MORE PICS OF MY EPISODE 1 LOOK ! #instantinfluencer @instantinfluencer @jamescharles also clip of @parishilton saying I was her favorite now that meant so much to me I cried watching beacuse she is my idol and it’s crazy how she knows me I love you Paris so much I can’t believe you said that Thankyou 😭❤️❤️🥰🥰🥰🥰 don’t forget to tune in next friday for a all new episode of @instantinfluencer !! Are you #teambenny ? Comment below ! #youtubeoriginals #youtube #jamescharles

In the “Project Runway”-style show, Cerra and five fellow emerging beauty artists compete in challenges. These range from creating makeup looks to filming and editing videos, all of which showcase their artistry skills and personalities. Each week, someone is eliminated. Charles, along with a panel of beauty industry judges, will choose the winner. Judges include president of cosmetics brand Anastasia Beverly Hills, Norvina; socialite and original reality TV queen, Paris Hilton; and more.

On top of the $50,000 grand prize, the top artist also will receive the same filming equipment setup that Charles uses, valued at $10,000, as well as a collaboration with Charles on his YouTube channel.

While he couldn’t give away any details, Cerra described the experience as a once-in-a-lifetime chance. While the show sometimes put him under immense pressure, he knows these experiences have helped him grow personally and professionally.

“This was something that has helped me be a better artist and enhances why I love what I’m doing,” he said.

When the show was announced in early April, Cerra noticed his social media numbers start to climb. The day after the show’s premiere, Cerra gained tens of thousands of followers, and his YouTube subscribers skyrocketed.

“I was blown away by the support,” he said.

Cerra also hopes to serve as inspiration for others. When he first got into beauty, he recognized there was a stigma around men wearing makeup, but this was a creative outlet and a way to boost self-esteem. Today, some of the biggest names in makeup are men, Cerra noted, and more and more people are starting to see past outdated gender norms.

“We all deserve to be able to express ourselves,” he said. “I want to show people (that) if little boys want to play in makeup, it’s not something they should feel bad about. It’s OK to be different and unique. That’s something special that you need to embrace.”

While the exposure is amazing, Cerra doesn’t just rely on followers to be successful. He’s always put everything into his craft as well as lighting, filming and editing for hours to get it right.

While he did receive negativity from his peers during his journey, he never let the naysayers get in his way. He advised others looking to follow their big dreams to work hard, tune out the negativity and never give up.

“Keep working toward your goal, and it will happen one day,” Cerra said. “I worked so hard and put so much time and effort in, and it paid off, and here I am. It’s only going to get better.”

Online: See more looks from Cerra on Instagram, @bennycerra, or on YouTube.com/bennycerra

When and where: Fridays at youtube.com/JamesCharles