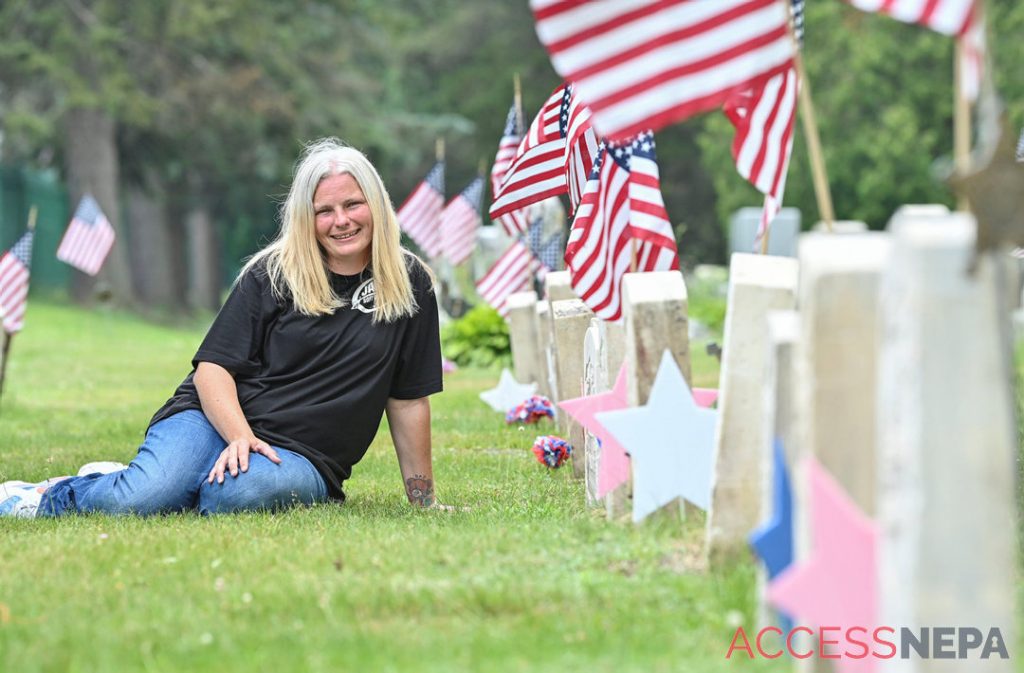 Alicia Lee takes pride in giving back to those who served their country.

On a humid, bright day in early July, just beyond the gated entrance to Dunmore Cemetery, Lee stood in front of a mausoleum in a T-shirt and jeans with a cigarette in one hand and a bottle of cleaning solution in the other. She sprayed the stone monument in fluid motions, careful not to miss a spot. Across the cemetery road, her black Lincoln MKZ, which she uses to transport her supplies to clean the headstones, sat parked beneath trees.

The Factoryville resident began the process of cleaning veterans’ headstones about a year ago during a visit to Laceyville.

“My grandparents are buried up there, and my mom was telling me how it’s going to cost $8,000 to replace both of the stones,” Lee said. “So … I told her, ‘Give me some time,’ and I looked into it and I figured out how to get them cleaned, and I cleaned them until (they were) brand new. There’s a couple of military stones up there that didn’t have any flowers on them or anything like that. So, I ended up cleaning those ones while I was up there, too, and I just started doing it from there.”

Her husband, Billy, owns JABBS Soft Washing and Pressure Washing service in Factoryville and specializes in cleaning the exterior of houses, decks and outdoor patios. He started the business last year during the pandemic, and a small part of the operation included cleaning headstones. No other company in the area offered the service, he believed, so he thought it would be a good idea to incorporate into his business.

“I started doing that, and then as soon as she did those two marble stones (in the Laceyville Street Cemetery), she just wanted to do all the military ones. I do no work,” he said. “It’s all her. I just do the house part.”

But in order to continue the process of cleaning the headstones, Lee needed to figure out an alternative to spending her own money to purchase solution, as more people asked her to clean headstones.

She organized a fundraiser on GoFundMe, and on June 28, she shared on the fundraising platform that she had reached her goal and would be able to buy 55 more gallons of solution to continue cleaning military headstones.

Lee continues to give back to the community by turning her passion into a mission-driven organization. Her attorney is working on completing the paperwork to officially make her cleaning service, JABBS Memorial Cleaning, a nonprofit. The new organization will be fully owned by Lee, while her husband will continue to own JABBS Soft Washing & Pressure Washing service.

In order to properly treat the stones, Lee does all of the cleaning by hand and insisted that pressure washing should not be used because it could blow apart the stones. She also said not to use a wire brush either, because it digs too much into the stone. Instead, Lee prefers a soft bristle brush. But there are some aspects of the job that are out of her control, like the weather.

The mausoleum in Dunmore Cemetery was the 460th headstone she has cleaned. Her goal is to clean 600 by Labor Day and 800 before the end of the season, which ends when the outside temperature dips below 55 degrees because the solution will not soak into the stone in colder weather.

Lee said each stone takes about 30 minutes to clean. But the cleaning process does not end once the half hour expires.

“Mother nature will clean them two to three months after I’m done with them. Every time it rains it just washes a little more off,” she said.

She grew up visiting her grandparents’ graves every weekend and from that experience continued to hang out at cemeteries. Lee also makes sure to include the next generation of community cleaners in her work.

“Family means everything to me,” Lee said. “And we’re hoping once we’re gone, that they can take over. … We do everything together.”

The overlap between the small business and family ties even extends to the company name. JABBS stands for Jacklyn, Alicia, Billy, Brayden and Sammy — all the members of Lee’s immediate and extended family.

Lee continues to be ambitious with her new nonprofit. Her next goals include applying for grants from the Pennsylvania Department of Military and Veterans Affairs in order to put that money toward purchasing a used truck to haul the water and solution needed to clean the headstones. She also hopes to offer the service to any and all military families.

“It would mean a ton to me if I could just keep doing it … with the community on my side,” Lee said.