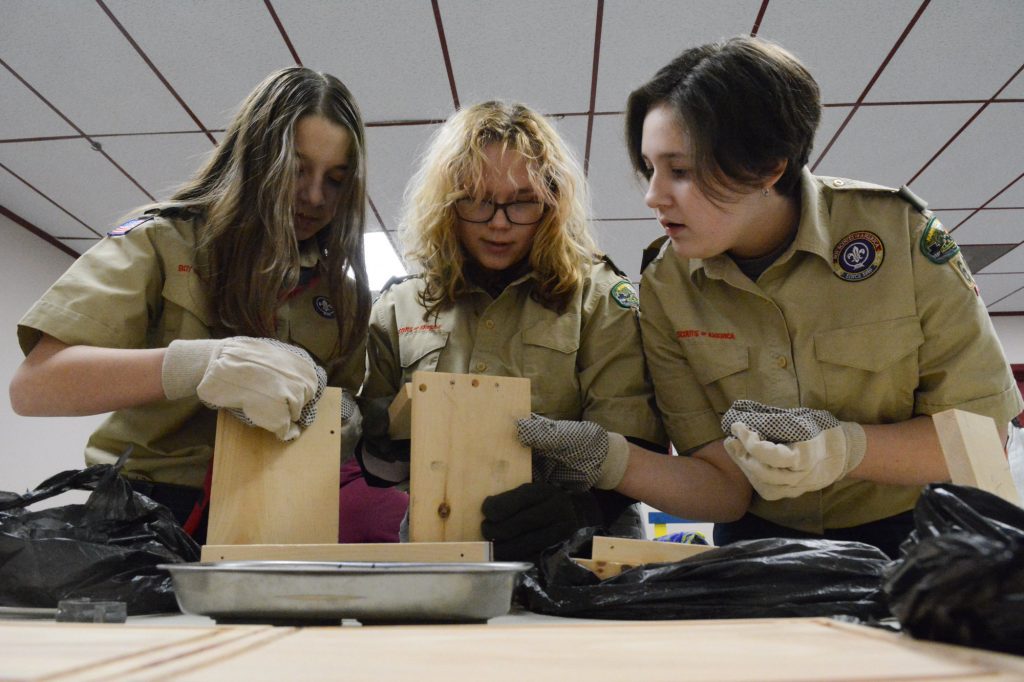 A lifelong lover of the outdoors, she was never far behind her Boy Scout older brother. Since she was a girl, however, she was always on the sidelines during meetings at the lodge built in honor of her great-grandfather, Harold Bensinger, who became Port Carbon’s first scoutmaster in the 1920s.

The Boy Scouts of America’s February 2019 decision to allow girls into its ranks, coupled with a name change to Scouts BSA, changed all that. Now, Bensinger is carrying on her family legacy as Scoutmaster to Troop 604G — the G stands for “girls” — the first girls to join the Scouts in Schuylkill County.

“Very exciting, being able to be a part of history,” Bensinger, 35, said. “These girls have a chance that I didn’t have growing up and it’s definitely an honor to guide them through it.”

On Sunday night, the girls gathered at the lodge and built wooden bluebird nesting boxes for the springtime, helping to increase the area’s bluebird population. The troop was living up to its nickname, The Bluejays.

“The key to success in life is not to not make mistakes but to learn from your mistakes,” Bensinger told Tara McElhenny, 14, as she worked on her nesting box.

“It helps us learn how to build things,” McElhenny said.

“I believe Scouts BSA is a program that teaches youth leadership, resourcefulness far beyond just outdoor skills,” Bensinger said. “Any gender can learn those things.”

Their program also includes STEM and training that Bensinger hopes will stick with the girls throughout their lives and careers.

“I want to do more outdoor activities and hiking,” said Cayleigh Collins, 13.

The controversial move to let girls into the Boy Scouts was a response to a decline in BSA membership across the United States and Canada, as well as Schuylkill County. The inclusion of girls has improved membership somewhat.

“I wanted to make a troop for the girls,” said Rachel‘s niece, Julia, 12. “I was hoping for more girls, but it’s kind of like less crowded without having like 10 girls at once.”

“You’ve made history,” Rachel told her girls. “How does it feel to be a founding troop?”